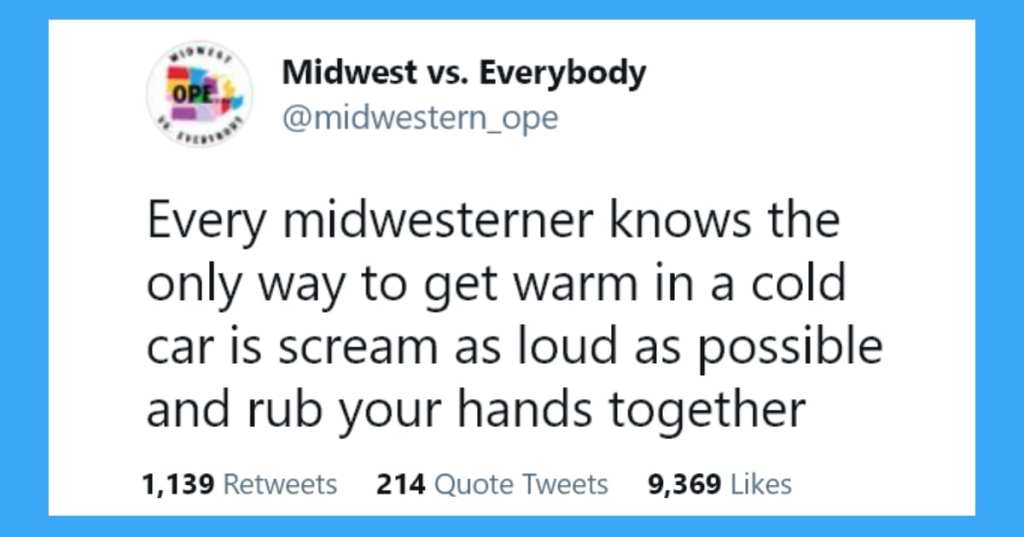 10 Things Every Midwesterner Just Knows to Be True

If you’re from the midwest, like I am, then there are certain things you just know in your heart.

One thing you definitely DON’T know, though, is where exactly the midwest even is. I mean, where you’re from is part of it, for sure, but the term is kind of slippery.

It’s not like “West Coast,” where there’s a clear criteria test. Does your state touch the Pacific Ocean? Yes? Then it’s part of the West Coast. But “mid” west?

It’s a point of contention according to everyone with whom I’ve ever broached the subject. For the record, the federal government apparently considers the following states to be the “official” midwest: Illinois, Indiana, Iowa, Kansas, Michigan, Minnesota, Missouri, Nebraska, North Dakota, Ohio, South Dakota, and Wisconsin.

I could stand out here freezing my fingers off for another hour and be late to work or I could just get in my warm car and risk it all.

It’s really the only thing that matters.

Midwesterners: not so bad without the wind today

In Missouri you need to replace that last picture with a QuikTrip.

“tHe MiDwEsT DoEsN’T hAvE aNy CuLtUrE”

Would ya just look at it?

If you say “welp, I spose it’s that time” in a mirror three times, a midwesterner will appear and ask you to play cornhole

The last one is called “puppy chow.”
I don’t know why, I wish it weren’t true, but that’s how it goes.

One of the biggest struggles of growing up in the Midwest is explaining what these are pic.twitter.com/AcGq81wuCg

If you drive by cows and don’t say the word “cows” then I’m going to have to assume you’re physically incapable of speech.

South: everything is bigger here

It really is the perfect temperature.

And in that moment you question everything that has brought you here.

It helps a little?

Midwesterners do this and think they’ve beat Mother Nature pic.twitter.com/28FEirVkCs

Somehow they have more calories than the burger.

What’s the most midwestern thing you’ve ever done?