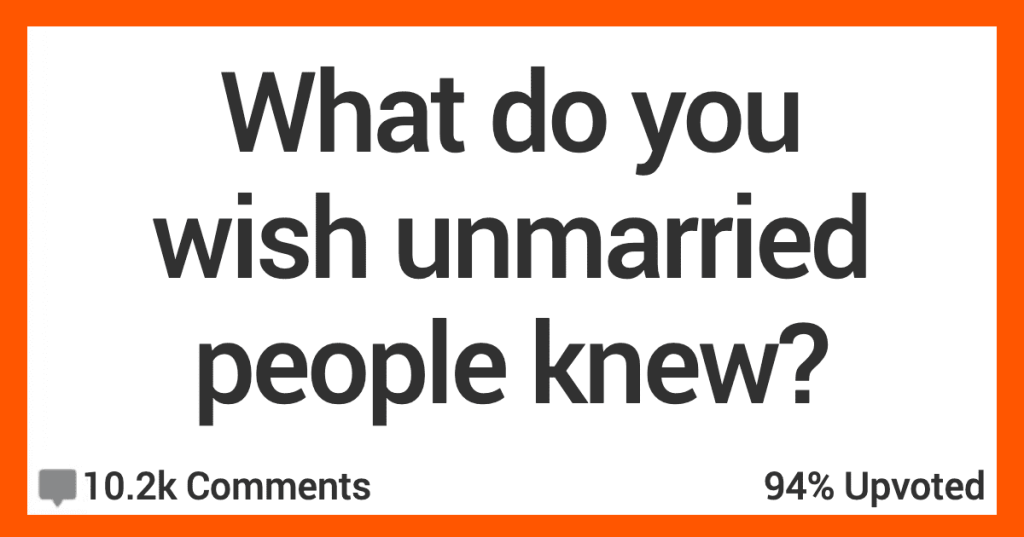 And unless you’ve been there, you’re in the same boat as me.

But today we’re gonna get some knowledge dropped on us by married folks about what they want unmarried people to know.

“It’s highly important to make sure you take care of yourself because your personal difficulties are now felt by your spouse as well, especially if you can’t attack the issue head on.

It’s okay to tell your spouse you need something for yourself.”

“Your single problems will be your married problems. Marriage and your spouse can’t fix you.

Work on yourself as much as you can before you get married. For yourself and for your spouse.”

“It’s okay to use two blankets.

No one likes to wake up with cold a** cheeks because your spouse stole the blanket.”

“Spouses don’t actually have to sleep in the same bed or even the same room. I snore and my wife is a major bed hog.

I usually get up far earlier than she does. We sleep in separate rooms and are both very happy with the arrangement.”

“Getting married WILL NOT help solve any issues in your relationship…

On the contrary, it is more or less guaranteed to make any problems you currently have worse.”

“The wedding is just one day and does not fix any issues.

It goes back to the exact same relationship afterwards.

And if you’re lucky, that’s a good thing.”

“My heart always hurts when I hear people say “I gotta pin that man down” or “I’m going to make him put a ring on it” or other things implying that the woman is coercing the man into marrying her.

Relationship where gf and I liked all the same s**t, didn’t have same values: fought constantly.

Relationship where gf and I liked none of the same s**t, had 90% similar values? Best conversations ever, showed each other cool stuff, found new amazing things neither of us would’ve thought of alone.”

Make sure to be accepting of heartfelt apologies as well.”

“It’s OK to admit you are wrong. Because we are ALL wrong sometimes.

Being pigheaded and stubborn doesn’t accomplish anything.”

“Sometimes it’s nice to have different interests and hobbies. Everyone needs time to do their own thing sometimes.

It also exposes you to new things. I’m never going to be as interested in glass making and glass art as my wife is, but I enjoy seeing her passion and learning about a whole world I previously never knew existed.

And she really does not care about gardening, but greatly appreciates getting to eat the results of it. Meanwhile I get to go have some me time out in the garden or the plant store.”

If you were struggling before then a baby is going to make those struggles even harder. Babies make fantastic relationships harder! Don’t have a baby if you’re having problems!

What do you think unmarried people should know?