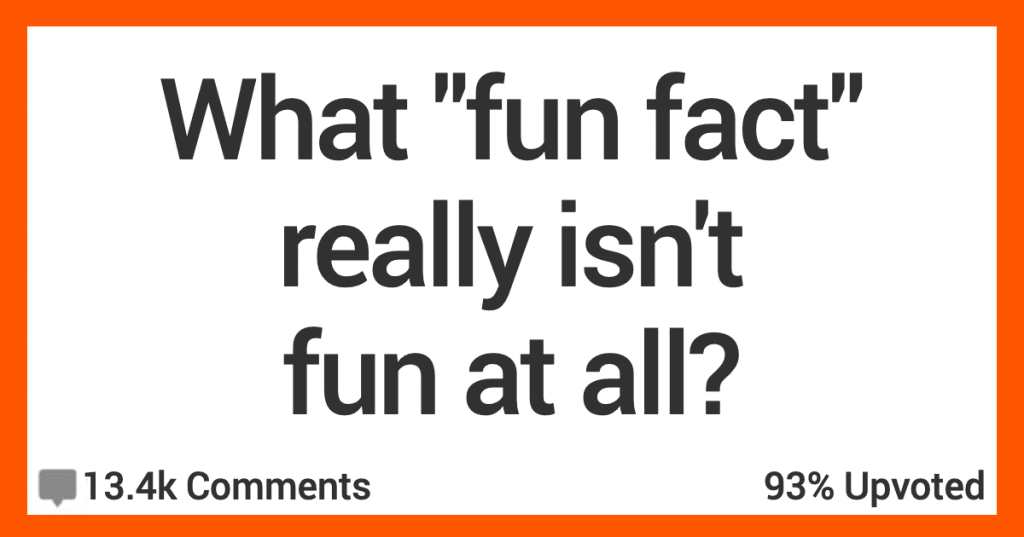 12 People Share Facts That Are Not Fun at All

Depending on what kind of person you are, these not-so-fun facts are either going to really interest you…or really depress you…

It could go either way!

Check out facts that AskReddit users submitted that are not fun at all.

“Your brain blocks you from feeling your organs moving around inside you.

Most of the time…”

2. Could happen at any time.

“Speaking from personal experience here, but your body can randomly decide to become allergic to d**n near everything edible at any time.

Antarctica is a desert, it is too cold for bacteria to live. Nothing there to clean up penguin droppings.

If you are close enough to see penguins, you will also smell them.”

I was flying last week, and a woman in front of me refused to remove her shoes after being instructed to do so. Cue an argument, and then she begins to shout, and the TSA waves her through because they don’t want to have to deal with it.

“The person who had the first facial transplant had her face chewed up by her Labrador dog while asleep due to sleeping pill overdose.”

“When a whale dies lots of gases buildup in their body causing very high pressure eventually to the point after many weeks where the whale will blow up due to the high psi.

Body debris are floating in the ocean.”

They see hands or lips as mental images that tell them what to do.”

“Washington Sqaure Park in New York is essentially a graveyard, with an estimated 20,000 bodies buried below the surface.

Many were yellow fever victims, wrapped in yellow sheets and buried by the poorest residents. When the foundation for the famous arch was dug, a number of these were exposed.”

“The united states has misplaced or lost 6 nuclear weapons over the years.

There have been 32 “Broken Arrow” incidents, which are unexpected incidents involving a nuclear weapon.

“During WWII, the Japanese military unleashed diseases on Chinese villages, they also dumped these pathogens into the waterway.

When these people sought help for their illness, the Japanese would proceed to vivisect them to examine the internal effects of the disease.”

“Wasps survive without a head for 12 hours.

I found that out when a wasp ended up beheaded in my living room and still came at me for the k**l.

“The giant tortoise was so delicious, it caused not only itself to be hunted to extinction, but also the dodo.

Giant tortoise meat was supposedly better tasting than chicken. Its fat tasted better spread on bread than butter. Also, it was the perfect food for sailors at the time, as their bladders stored 1 litre of purified water, and they could survive without food in hibernation for almost a whole year in the hull of a ship.

Not to mention, because they evolved without humans, they were easy to hunt. You could tie one to your back, and roll another to the ship and they would just let you. It was so delicious, they went unrecorded for a long time because expeditions to bring living samples of wildlife to Europe kept eating them on the way.

Conversely, the dodo, while as easily captured by sailors, tasted awful. It was completely unpalatable. HOWEVER, one day, someone discovered if you cooked dodo meat in the more delicious tortoise fat, it tasted just like chicken. So now, sailors were hunting a few tortoises at a time for their fat and water, storing them, and then hunting dodos on the daily.

Overhunting, plus the introduction of rats to the environment (because sailors) which would eat eggs, led go the population to decline at a rate they could not breed to keep up, leading to both animals going extinct.”

Do you have any facts that are NO FUN AT ALL up your sleeve?