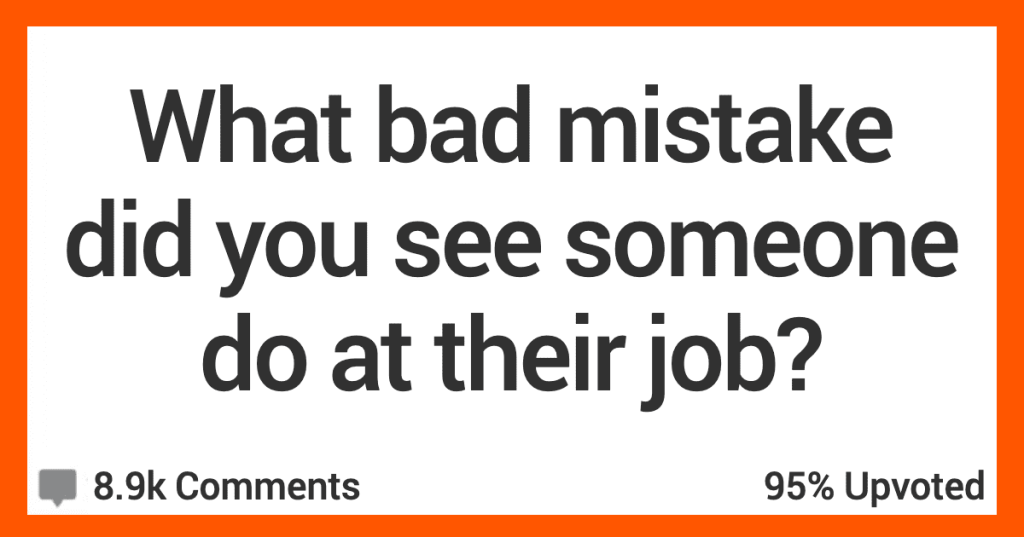 Oh, man, this is gonna be depressing, I can already feel it.

Because no one really wants to see anyone screw up at their job…unless they’re a jerk and they totally deserve it.

But whatever the case is, today we’re going to focus on what these AskReddit users had to say.

“Plant manager let the safety guy go because they didn’t believe safety was a full time job and wanted to cut back on company spending and decided the supervisors could do all the safety audits, training, keep the building up to code.

Not even a week later 2 guys got their arms cut off working on a machine that they weren’t trained/certified on and the back building caught fire due to pallets and cardboard boxes being stacked in the wrong area near the furnace.”

“Forget they had c**aine in their pocket while crossing a border.

This led the Austrian border and customs police to open up about 100 cans of exposed film stock that was in the van the guy was driving… film stock from a very expensive film shoot the week before.

The result was second unit had to go back and reshoot an entire action set piece for the film. Line Producer told me the mistake cost about 5 million euros.”

“Working with a tree cutting service in Tampa, I was asked by the boss to ascend a nearby tree and cut some limbs. After seeing how close they were to power lines, I refused. He got really p**sed off, yelled at me to clean up the area.

Then he sent up Dallas.

Dallas put on his climbing spikes, roped up the tree and started cutting. I was worried and kept watching him as I picked up limbs.

Sure enough, he leaned back and before I could yell, put his sweaty bare back right against the power lines. A bright blue flash arced across his back and his body jerked away and slammed against the tree trunk. He bounced off and back into the wires. And again. Finally his spikes got dislodged and he fell out of the tree, falling until his safety line snapped taut, leaving him dangling upside down like a broken-back doll.

I thought he was d**d, but a moment later he started moaning, then screaming. “I’m on fire!” he yelled. We lowered him to the ground to the sound of sirens approaching; a neighbor had seen what happened and called EMT.

A nasty black mark curved across his back and the current had surged down his legs and through his boot heels, seeking out ground. Both his heels were blown out.

I quit at the end of the day.”

“Worked at a large casino in a large tourist city.

The penthouse garden was being redone, and the gardener has put tarpaulins down to protect the tiles. A storm rolled through, and the tarps were blocking the drains, so the garden flooded, back into the penthouse, down the lift shaft, and into the restaurant I worked. Chaos.

2 years later, I’m working in a different hotel, same city. The restaurant had a fountain in it. I come in to open up one morning, and the restaurant is flooded. Gardener has turned on the fountain tap to refill and forgot to turn it off.

It was the same gardener.”

“In the ER, Doctor wrote down an order for 15mg IM of Toradol (anti-inflammatory pain k**ler) and the nurse I was training misread and started to draw up 15mg of Haldol (anti-psychotic).

That’s triple the standard dose for Haldol. This was for a patient with abdominal pain. The nurse I was training didn’t question it at all. This wasn’t a newly graduated nurse mind, just new to my department.

Yes, I stopped her before she gave the med. No, she did not continue to work in the ER.”

“An IT worker once sent an advisory to the entire company about an email several people had received with a malware link.

She did so by forwarding the actual email with the link.”

“A security guy at my job.

He had been there for about a year and while it wasn’t a lucrative job, he made decent money for the position and tons of benefits. He was fired for stealing toilet paper from the janitorial closet.

This was low quality super thin commercial toilet paper, too. He had been doing it for a couple months before I was asked to put a camera in the closet.”

“We had an old electrical engineer in my department, really knew his stuff except he was nearly useless on a computer. He didn’t want everyone to know so he skated by and had other people pick up the slack for him.

Though a series of blunders and lack of documentation on his part he caused an electrical control box to be removed from the list of parts that we were supplying to the customer for that program.

That was worth 12.5 million dollars for revenue in the first 6 years once the product went into production.”

“I worked for a start-up cider manufacturer in my second year of college. Normally after a day of production we have to sanitize all the metal components in hot caustic wash.

There are hundreds of pieces, so it takes a while. Anyways, our managers left us an hour before our shift ended to clean up. I had to go do some e-commerce end-of-day stuff before leaving so my coworker wrapped up the cleanup. On Monday we returned to the warehouse burned down.

Apparently he left the caustic heater on all weekend and it caused a chemical fire. Everything was destroyed and it ended up bankrupting the company. He dropped out of his co-op degree after, he wouldn’t be able to get recommended for another placement.”

“Newish employee deleted the root directory for the SFTP server.

Took the server guys about a day and a half to fully restore it, with all files since the previous night backup lost.

Same employee did the exact same thing again a few weeks later. Still had a job when I left, somehow.”

“Taught preschool for 8 years before the pandemic.

It’s protocol to count the children before moving from one room to another to make sure no one gets left behind. Had a coworker on her phone, didn’t count kids, and had left behind a child in the toy closet.

Kid was 2 years old and trapped, screaming and crying in a dark toy closet for 20 minutes before a teacher passing by the empty classroom heard her. My coworker didn’t even get a slap on the wrist and management never told parents.

This same coworker forced her class of 2 year olds to “get dressed themselves” for outside play in the winter so one time a little girl ended up playing outside in the Minnesota snow without boots on for ten minutes before my coworker noticed.”

“Saw a guy get zapped pretty bad when he stuck a tool in the wrong place on a big dryer at a hotel where I worked.

We had asked him if he should cut the power first, and he said naww, don’t need to. For a moment after, we thought he was d**d.”