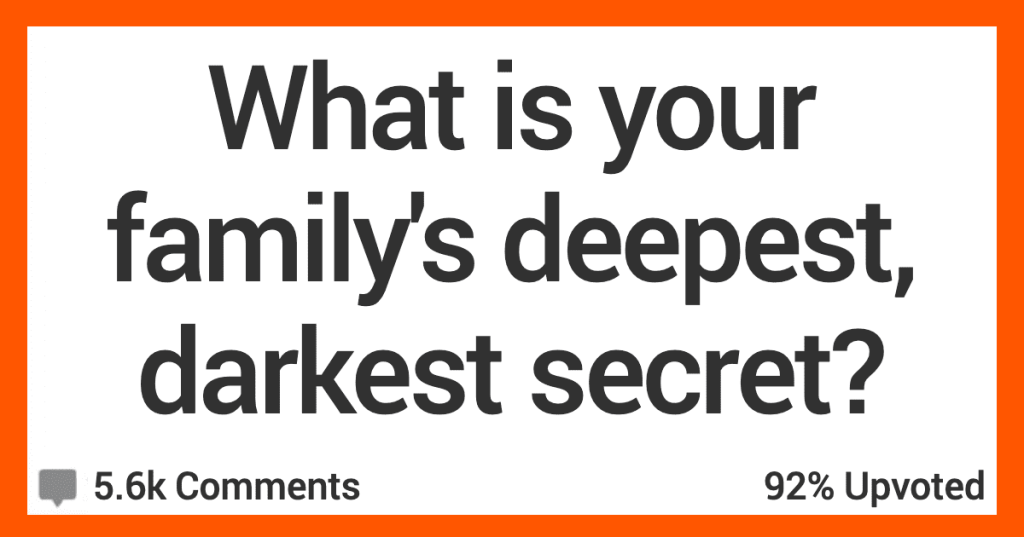 Every family has secrets they don’t want other folks to know about.

And some of them are definitely more scandalous than others.

And these brave souls on the AskReddit page were nice enough to share the dark secrets from their families.

“My mom was allegedly adopted in the 1970s but we found out about 5 years ago that my grandparents (who are both dead now) actually just straight up kidnapped her, like baby snatched her at a park, and her bio parents had been looking for her since (although her bio mom d**d as well before she found out, which is very sad. She d**d never being reunited with her stolen child.)”

“My grandmothers nephew was allegedly “cleaning his shotg**” when it accidentally went off and k**led his wife.

He gets arrested obviously, spends a while in jail before finally seeing a judge for sentencing. The judge deems it an accident, careless with a firearm and gets off on time served. His brother in law was waiting on the steps of the court house where he proceeded to unload a revolver into his chest.

I never heard what happened to him, and I can’t find a news story about it.. this was back in the 1970’s in Southern Ontario.”

“My cousin k**led his mother with elder neglect just to inherit her money and to get rid of her as a “nuisance”.”

“My ex husband’s grandmother disappeared in the 1970s.

Her head was found several years later. It remains unsolved. My ex husband, a few others and I believe it was his grandpa who was a struggling al**holic and just an awful person. NO ONE in his family speaks of it.

I only found out due to a friend of a friend knowing his grandma. He found out when he was 16 after a newspaper published a short article on the case. His parents flipped and made the newspaper retract it. Small towns can hold a lot of secrets”

“I am a r**e baby. Mother worked for security at Texas Stadium.

Coworker was k**led in line of duty. Everyone gathered at the bosses house to decompress. He gave her some sedatives to calm her nerves because she and the coworker were close friends.

Took advantage of the situation, and boom June ’82 I arrive. The guy had a family with 3 or 4 kids. My mother took his name to the grave with her in ’95.”

“My great-great grandmother and her sister k**led their neighbor in 1916 because he a**aulted my great-grandmother.

The man was known around town as a predator and there was never an investigation. The sheriff’s deputies just took his body away and the town buried it in an unmarked grave.”

“My brother is a serial r**ist who keeps getting away with it or nearly away with it (house arrest for 6 months—oooooo, that’ll teach him) because the justice system is complete garbage for abuse victims.

We all know he did it, does it; he’d sometimes brag about it when he was stupidly d**nk (which was often). But no one else really believes us, because he’s a smarmy narcissist who lies publicly.”

“My step-grandfather k**led my grandma when she told him she was leaving him for being a**sive.

His family helped cover the entire thing up and told the police it was s**cide. In the Missouri law eyes, it was open and shut case and declared a s**cide.”

“My grandfather single handingly confronted and took on a mob family that was running an illegal waste disposal service in the country and poisoning the land.

Law enforcement were scared of this mob family, but my grandfather won and got them legally removed.

He was tough as nails and a proud WWII vet, I miss him dearly.”

“My grandpa committed s**cide because he was going to be unable to move .

My grandma assisted him at home , giving him medication . We aren’t allowed to speak of this since my Grandma is deeply cCtholic and considers s**cide as a sin .

My grandma , father and uncle were the only witnesses .”

“When my sister was 14 our 42 year old neighbor groomed her and convinced her that she should lose her virginity to him. He was married with 4 kids.

She had s** with him and I (10 at the time) found out because he would come over and party with my parents…he used the restroom one day and I went in after him. He had left a note in a toilet paper roll and it fell out when I used the TP. I showed it to my mom and she waited until my dad was at work before she confronted the neighbor.

He apologized. She was afraid to tell my dad because she thought he would k**l the man. It eventually came out and no one did anything about it. The neighbor moved away and we never heard anything again.

One day he got into a fight with his wife and took a shotgun, shot his wife and first daughter in the head before doing the same to himself.

His second daughter (my great grandmother) watched the whole thing happen, she was a wonderful woman but i can’t imagine what it’d be like to watch that happen.”

If so, please do it in the comments.