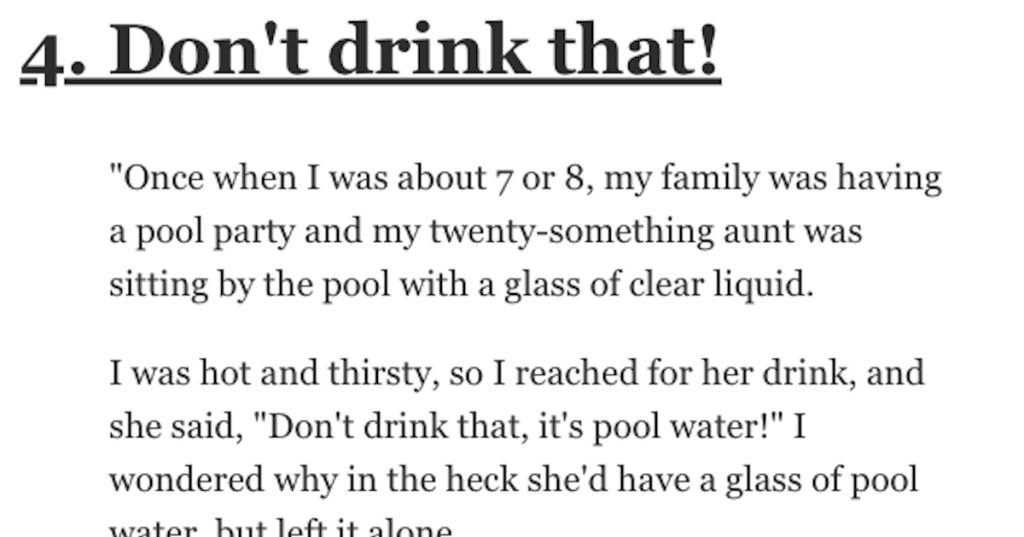 Do you remember a childhood mystery that really stuck with you throughout your life?

Maybe it had something to do with a weird relative or a secretive neighbor or something that was never to be spoken of in the house.

I think most of us had something in our lives like this, right?

Folks on AskReddit talked about childhood mysteries that they ended up solving later in life. Let’s see what they came up with.

“When I was in elementary school, I always wondered what the teachers staff room was like.

It seemed so mysterious – and I remember trying to get a peek anytime I walked by and the door would open.

One day the turtle went missing and my parents told me it climbed the wall in our backyard and went to the creek behind our house. I, being a naive toddler child, did not question this logic.

Fast forward to when I was 17 and driving with my mom in the car. We saw a tortoise crossing the street and I was suddenly thrown back to my memory of us having a pet turtle. I pulled over to save the tortoise and was all “OMG MOM TURTLES CAN’T CLIMB WALLS! WHAT HAPPENED TO OUR TURTLE?!”

Came to find out it had burrowed a hole in our lawn and my dad didn’t notice it until after he ran it over with a lawn mower ? obviously it was easier to pick up the pieces and tell your kid it climbed the wall than admit you murdered it with a lawn mower.”

“I visited my dad when I was 7-years-old at the place where he worked, or so I was told.

I remember people laughing at me because I said it looked like a prison.

The people laughing were the guards and I was indeed visiting my dad at Terminal Island Federal Correctional Institution where he was
an inmate.”

“Once when I was about 7 or 8, my family was having a pool party and my twenty-something aunt was sitting by the pool with a glass of clear liquid.

I was hot and thirsty, so I reached for her drink, and she said, “Don’t drink that, it’s pool water!” I wondered why in the heck she’d have a glass of pool water, but left it alone.

Years later, as my family’s alcohol consumption habits became clearer to me, I realized that she was probably drinking vodka.”

“We grew up poor and at the age of 10 my friends were all having these crazy birthday parties with petting zoos, bounce houses, clowns, etc. so my mother who is very resourceful decided I would have a sleepover for my 11th birthday.

It was great and we were gonna make ice cream cones! So we got all the stuff out with my mom, and my mother opened up the box of cones, and they were all smashed up. She said that we weren’t having regular ice cream, we were having “magic castle sundaes” (because the broken ice cream cones resembles the sections of a castle).

We all thought this was great and we had them. When my friends went home, they asked their parents to make magic castle sundaes. Two days ago I found out that my mother was getting the past sell by foods behind the grocery store (they were not expired, just past sell by date).

She had no idea that the cones were brown up until she opened them with us. She thought of the magic castle idea quickly, and we all loved it. Just goes to show how stupid kids are.”

It wasn’t until I turned 17-18 that I figured out the reason: times got tight towards the end of every month and this was my parents way of stretching the almighty dollar.

“I live and grew up in the Deep South.

As a child from earliest memories until about 8, we would take a winter trip up to Stowe, Vermont to see the grandparents. I would have scary nights hearing ghosts wailing outside the windows. it was terrifying! GPs moved south and we stopped going.

When I was in my 30’s I took another trip up to Vermont. first-night stay, I heard the ghosts!!! Turns out the winter winds up north are waaay different than the winds of southern nights.

Suddenly my general fear of the dark disappeared as I realized fully what the source of the sound was.”

“That the brown part of bread doesn’t contain the nutrients.

My brother lied to me to get me to eat crust when I was a kid.”

“My dad used to occasionally burst out with this one line of a song:

Only ever that line. When I was 6 or so I asked him why and he said it was an old drinking song that was absolutely filthy and I was too young to hear the rest of it. This continued once or twice a year until I was 18.

And then went right back to reading the newspaper…”

“The weird smell that I referred to as a “stinky cheese smell” were probably a symptom of seizures.

I would happen maybe twice a year, it’s not really like cheese, it’s like a smell that isn’t a smell. Idk how to even describe it. It was so minor parents disregarded it. I can remember it starting in 2nd grade.

I suddenly started having it a lot more as an adult when I hit 28 and got diagnosed two years later after symptoms became way more extreme. Makes so much sense now!”

“Growing up I always insisted I liked the mashed potatoes at my grandma’s house better than the ones my mom made at home.

My grandma once told me it’s because she uses a special recipe.

I found out last year that my mom hand mashes her potatoes.

My grandma just gets the Betty Crocker boxed sh*t.

Her special recipe I was gonna get what she dies is Betty Crocker.”

“I remember being about 8, and in the car with my dad. I was in the front seat and we were driving somewhere, and this song came on the radio.

He cranked it and said something about it being the best guitar playing ever. He really jammed out, which was really uncharacteristic because he was usually so stoic. It was the only time I heard the song, and he died before I could ever ask him what song it was. When I asked around, no one knew wtf I was talking about or what song I was thinking of.

So I had this melody in my head for years, but how do you look up a song that has no lyrics? So for years and years, this song stayed on the back burner in my brain. I was afraid to forget it. Somehow this story pops up when I’m like 26 or so, chatting with my husband and we searched YouTube for “best guitar songs”.

After about 15 minutes, we find it. Cliffs of Dover was the song that I’d burned into my brain on repeat for 16 years. Now I jam out to it with my kids.”

In the comments, tell us your own childhood mysteries that you solved when you were older.