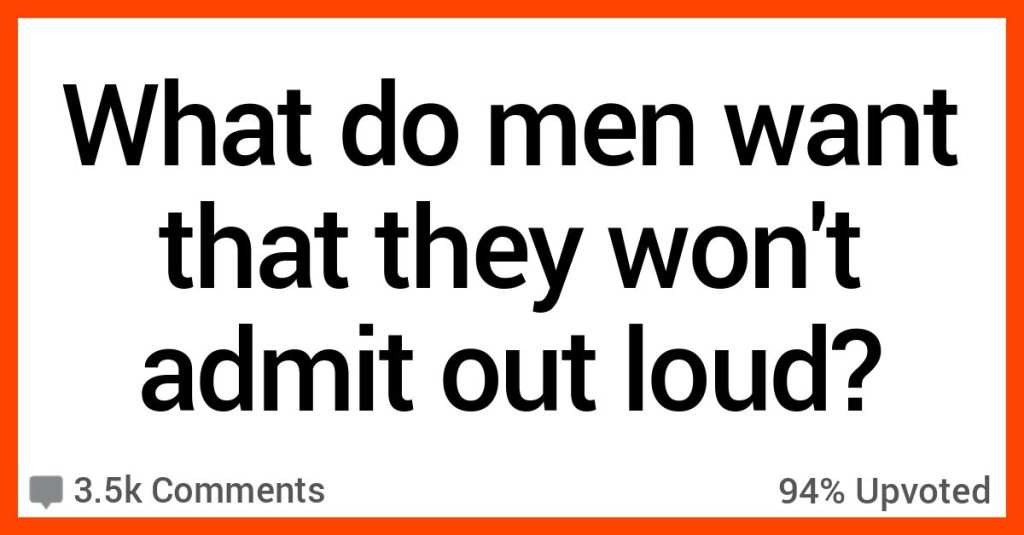 We all know it’s definitely tough to be a woman, but it can be hard being a man, too.

And one of the main issues is that a lot of men out there don’t think there are things they can talk about…but today we’re gonna get educated on what’s going on inside those heads!

What do you think men want but they won’t admit to?

“We like compliments, even though we pretend to not to.

From an early age we are told to not show emotion, as showing emotion is a “feminine” thing to do and a sign of weakness. A lot of guys cringe or have a hard time responding to compliments because we’re not used to it. To any girls out there who is bothered by their boyfriend seemingly not taking kindly to compliments, he actually does truly appreciate it deep down.

If there are times when he’s feeling low, I can almost guarantee he thinks about nice things you’ve said to him and it helps him through those rough patches. I’m speaking from experience.”

Dating over and over again just to face the same problem of your partner not trusting you because of some BS their ex pulled.

Stop lumping me with that piece of s**t.”

“Honestly, to be heard.

I’m a large, bearded, tattooed man that doesn’t look the friendliest even though I’m a teddy bear.

I’m never taken seriously when I tell someone they’ve said or done something that has hurt my feelings or just didn’t like.”

“I want to be valued and respected by default.

I dont want my only value in society to be based on what I can provide.”

“Body positivity for men, too.

Try to tell someone that back hair is natural, or having moobs happens or, God forbid, that it’s okay if you don’t have a monster c**k, and you’re immediately called a shrimp-d**k gorilla.

“To be able to give compliments without looking like a creep.

I saw a girl about a year ago that had her hair dyed blue, an oversized black t-shirt and some awesome emo makeup. I’m not one to compliment strangers but her looks had such personality that I just wanted to tell her that she was rocking the style.

Then I wondered if she was actually going to take the compliment or look at me weird… I understand certain commentaries aren’t cool so they’re, understandably so, frowned upon. But… I can’t help but feel like I just can’t compliment women anymore.”

“There’s a lot of man-bashing these days and personally it would be nice if society appreciated that most of us are okay human beings.”

“To not feel lonely. To be loved and validated because we’re not all self made, independent beacons of leadership.

To have the freedom to say, “I’m depressed, right now.” without being made to feel like a failure.

We don’t balance a ton of pressure and responsibilities because we thrive on it, we do it for survival and sometimes we’re simply terrified… We’re human beings.”

It’s decades into the future and I know it’s not my decision, but I do want them.

Would never tell my kids that though, I don’t want to put that on them.”

Men will admit to wanting to be in a relationship, but wanting to be single that’s something which is definitely wanted but kept under wraps.”

“We want to be comfortable and treated like people instead of like soldiers all the d**n time.

We’re human beings too! Stop assuming we can keep taking insults on the chin and go about our day!”

“To be loved again. Not have to worry whether your partner is loyal or if she is just using you for an ego boost or attention.

I wanna do all the craziest things with my partner. Be able to hold someone again. To love again.

Most of the time men are told to just suck it up and deal with whatever problem that they encounter, but what do we do when we encounter heartbreak? Heartbreak never truly heals. And holding it back, cause we’re told to, only makes the feeling worse.”

What do you think men want but aren’t willing to admit?