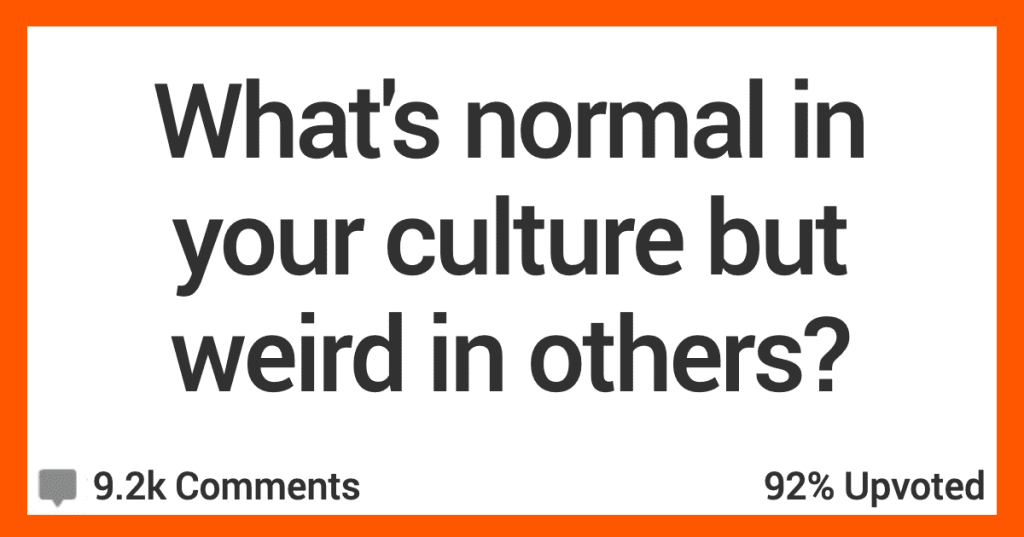 One of the joys of traveling is seeing how people live in other cultures.

And it’s especially interesting when you get to experience a culture completely different from your own.

What’s normal in your culture but would be considered weird in others?

Check out how people on AskReddit answered that question.

“Hot dish and jello salad. Waiting for the bus in -30 degree weather because “it could be worse!”.

The kindest community I’ve ever met. One time I got stuck in a snow bank trying to get on the city bus and everyone around me helped pull me up and onto the bus.”

“Apparently people don’t just walk up to strangers and start a conversation in other places.

Friendly people here tend to do it and most actually don’t mind a little small talk.”

“In my culture it is considered an insult to refuse food offered to you in someone else’s home if you are their guest.”

“Giving your boss a kiss when you arrive at the office,

Drinking one big glass of al**hol whenever we’ll you eat something, even the 6pm snacks,

Getting mad at people who arrive early at your parties or even on time because who the f**k shows up without being at least 5 minutes late,

Giving a nod to the fully-armed military whenever you go out in the city center,

Preparing about three different glasses, four plates of different sizes and three sets of cutlery per person whenever you invite them to eat at home.”

“You could just start talking with random kids and start playing with them.

It isn’t considered an offense in India.”

Mettbrötchen (seasoned, raw minced pork on a bun, optional onions, salt, and pepper) is a pretty cheap and delicious snack or meal in Germany and some surrounding countries. Shouldn’t be attempted elsewhere since raw pork isn’t safe to eat unless you know it’s fresh.

Mett is made specifically to be eaten raw and has to be made fresh on the day and either eaten, cooked or frozen (to cook later) on the same day. If your country doesn’t have this kind of standard you shouldn’t try it unless you trust your butcher with your life.”

“Living with your parents in your 20s, and when you get married it’s still commonplace for the husband and wife to live with the wife’s parents for the first couple of years of marriage.

Al**hol is strictly frowned upon but s**king (even from a young age) is a socially acceptable act.

Eating rice with every meal.

Being late (up to around half an hour to 45 minutes) is societally acceptable and is sometimes expected so invitees would often push the meeting time a bit earlier.

Absolutely stuffing your guests with food.

“Saying “Hey, how you going?” as a greeting. Extremely common in Australia, but apparently it isn’t used anywhere else in the English-speaking world.

Was extremely surprised when I said it to an American one day while talking online and they were confused. “What do you mean how am I going…? By car…?”.

It’s interesting, because it’s like the perfect amalgamation of “How’s it going?” and “How you doing?”, but for some reason it doesn’t seem to register that way for non-Aussies!”

“Where I live in the US, we pull over for funeral processions. It’s a respect thing and everyone does it.

A friend of mine from a different part of the states saw me do this while driving once and was SO confused and made fun of me out of confusion. It’s so common I didn’t realize some people don’t do this.”

“Using a small packet of tissue paper, name card, office access card with lanyard, heck even laptops to reserve a seat at an public eatery.

Once you place those items down on an empty table, it’s known to be occupied and you can then make your way to the food stall to place your food order and come back to the table you’ve reserved.

When foreigners come, some may not understand this local practice and take the seats anyway, or assume that the packet of tissue left there as a form of reservation is for their use, or trash left behind by the previous user.”

“When getting a traditional body tattoo, you lie on the hard floor with strangers “stretching” your skin for the tattoo artist to pierce.

One person is designated to wipe your blood ? and excess ink and the tattoo session usually lasts over a couple of back-to-back days or a week depending on a few things. While you are being held down and your skin stretched, women fan you and sing you songs.

When getting this tattoo, it’s common for you to ask someone to be your tattoo partner. Meaning the other person will have to come with and get the same tattoo as you. This is somehow meant to ease the pain, encourage you, and so they can lend some of their strength to you and also for luck so you won’t die in the process (as many did in the past from infection or whatnot).

The tattoo itself is done with boars teeth or carved whale/shark bones, but nowadays some artists use steel needles. Men are tattooed from the torso to to their knees (also around the p**is and almost to the butt crack). Women get it from the the knees to the top part of their thighs.

After days of pain, you will have to dance for your family party to show your tattoo and to have a grateful celebration in that you didn’t embarrass your family by not finishing the tattoo.”

“Swastikas are very core of Hindu culture and you will find one (if not very many) in almost all Hindu households.

Unfortunately they were hijacked by some crooked people and mean something else in whole rest of the world since.”