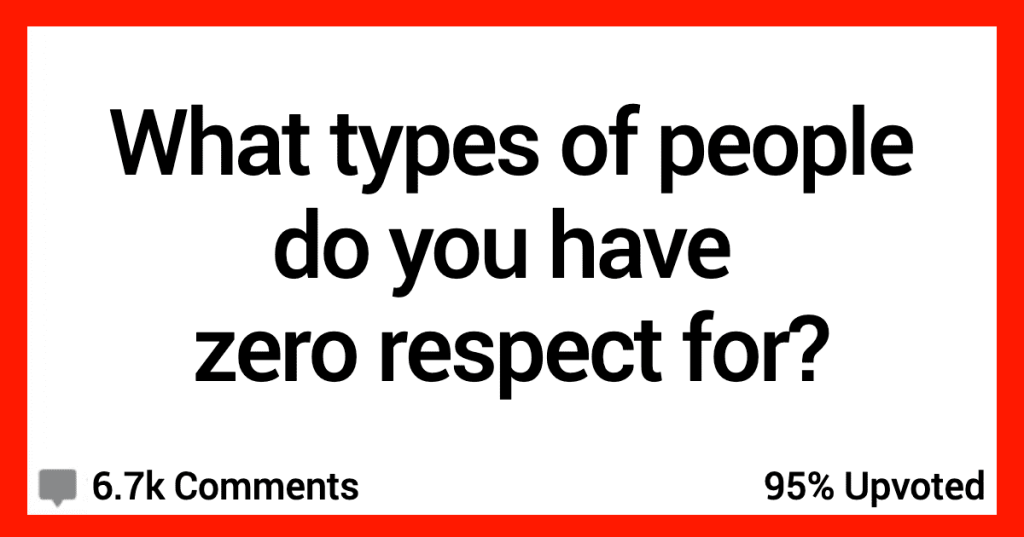 There are certain people out there who I have absolutely ZERO respect for.

But I won’t share them with you today, I’ll just let you use your imagination…

But we are going to hear from AskReddit users on this subject!

Let’s see what they said.

“The person on the top floor of the building I’m currently living in that’s playing sh**ty music way too loudly and it’s about to hit 10pm.

Not to mention she’s got the speakers facing outside..annoying everyone else too.”

“People who make fun of fat/skinny people at the gym.

Coming from a jacked dude, they are there to get help. We all started somewhere.”

“People who constantly ask for validation.

Asking for a compliment is okay but asking too much every single time we talk is just not.”

“People who make fun of lesser fortunate people than them.

People who look down on someone else for no reason.”

“Anyone that disrespects the working class.

Like talking s**t about construction workers, talking down to employees at restaurant, or at a retail store.”

The big name ones that have been educated countless times about exactly what’s wrong with the s**t they spew but never change, the ones who admit that believing the gospels is more important than being correct, the ones that deliberately misquote actual scientists to make them seem wrong, etc.”

“Boomers telling me the reason I can’t afford a house because I have a smart phone and a latte occasionally.”

“Narcissists who don’t know they are narcissists and then play the victim everytime while having a god complex.

Lie, cheat and obliterate everything they touch, including humans.”

“The people that don’t believe or ignore the fact that their pet is in pain.

I see too many dogs get euthanized for being “unable to walk” due to arthritis and have not been given a single joint supplement or pain medication in their life.”

“People who vote based on the personality of the candidate and not the candidate’s views, policies, and the impact those policies have had.”

“People who blame all the ills of society on any racial, gendered, ethnic, religious, political, or s**ually oriented group.”

Like someone who embodies a toxic political trope, but calls everyone out for the same behavior on the other side. Doesn’t have to be political either.

I know a dude who is just rude as can be, but the second someone matches his energy it’s like you slapped him.”

“People who steal things from other people.

What type of people do you have no respect for?