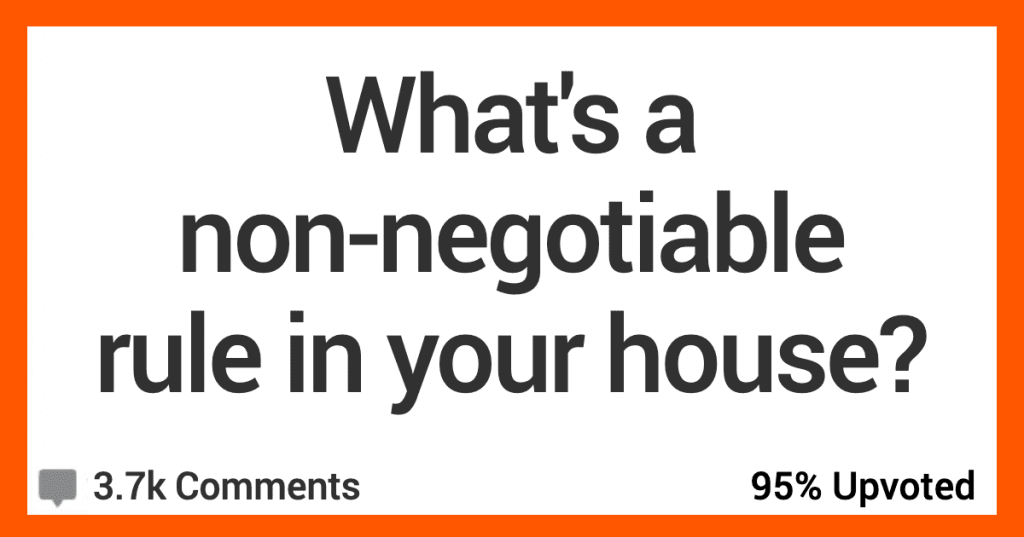 13 People Share the Iron Clad Rules in Their Homes

That’s a rule I live by…and I’m honestly kind of surprised that some people still allow that in their homes.

What’s a non-negotiable rule in your house?

Here’s what folks said on AskReddit.

“Don’t put stuff on the stairs.

Knocking is a slowly forgotten art of respect.”

Remarkably something you have to enforce quite often with small children.”

“If you pee on the toilet seat clean it up!!!

I am a single parent with 2 boys, I know I’m not the one peeing on the toilet seat but apparently they don’t either.”

“Don’t f**k around with someone when they are asleep.

If someone is asleep, they’re off limits, no messing with/pranks and no waking up without good reason.

It wasn’t until talking to my friends who had siblings who would pile things on them, move the bed, wake them up in the middle of the night (just general sibling hijinks) and realised how important the ‘leave sleeping family members alone’ was in our house growing up.”

“Don’t even think about putting my knives or pans in the dishwasher.

I will happily hand wash them myself.”

“Don’t feed my dogs anything.

I don’t care how cute they are looking at you.”

“Unless you’ve explicitly been invited to spend the night go away at the end of the night.

I’ll call you an Uber, I’ll pay your cab if I have to, I’ll give you a ride to retrieve your car tomorrow, but go away.

I like hosting, but only friends who also leave without basically being shoved out the door eventually.”

“Space heater has to be turned off and blow candles out when we leave.

We live in an apartment.”

“If there is food in the house, it is available to anyone.

“Don’t roughhouse with Teddy, he’s a small senior dog with a heart condition.

He sleeps a lot, and when I come into my mother’s room to talk to her and play with him, I always just wake him up instead.

I feel bad about it.”

“One of the biggest rules is actually for when people are leaving my home, and it’s a very simple one, “Text me when you get home safely.””

“Clean up after yourself. Let people have their turn to speak.

If things get heated, take break before you say s**t you’ll regret afterwards.

And always, always, close the dog gate after you walk in lest the dog go on an endless adventure.”