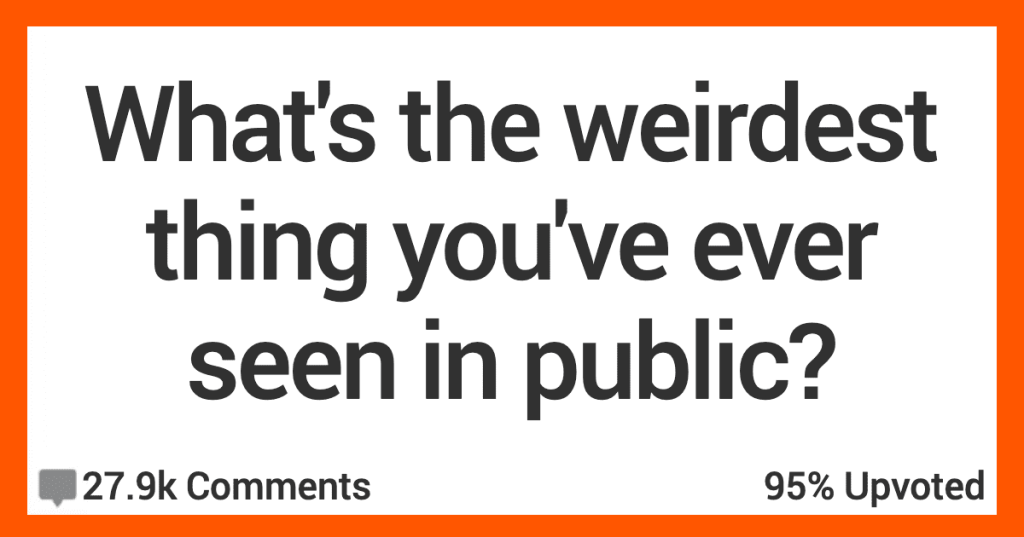 Have you ever been in a public place and you saw something that made you shake your head and say to yourself, “am I really seeing this happen right now?”

We’ve all been there at some point!

And today we’re going to hear stories from people who shared stories about the weirdest things they’ve seen in public.

“I was driving with my family to the beach through a rural area.

When we got to the edge of the beach we passed a guy mowing his lawn naked with a sock on his junk.

My dad and I looked at each other and both burst out laughing. Turns out the guy does this regularly and even has a Facebook page devoted to his ‘yard work!'”

“I was on a driving lesson recently and saw a guy waiting at a bus stop wearing a full face scuba mask and snorkel. Other than that he had on normal clothes.

Don’t know if it’s worth noting but there aren’t mask mandates in the UK at the moment, and there hasn’t been for a while, so I don’t think it was Covid related.

My driving instructor didn’t see him so I wonder if I hallucinated it? So weird.”

“A guy was jogging backwards on the pavement near a busy stretch of road in Trinidad.

It was amazing! His coordination and ability not to bump into anybody or hurt himself was impressive.

“I was a passenger in a car on a French motorway being driven to the airport.

As we overtook a car going slightly slower than the 80 mph speed limit, I glanced at the driver & did a double take. He was casually reading a thick War and Peace type novel and eating a banana.

I exclaimed to my driver who shrugged and said ‘yeah, we’re just laid back about driving in France.'”

“I saw a guy walking his rabbit on a leash through a park in Tokyo, which was quite odd.

I guess it might be quite normal in Japan, but I’ve never seen that before. It was cute though!”

“A guy holding a bag of his own vomit. He kept on opening it and rubbing it all over his clothes.

“I once saw a woman on public transportation discretely smell her fingers and then proceed to get a rollerball perfume out of her purse and roll it on each of her fingertips.”

“I was in a hotel lobby in Sicily when I saw this older moustached gentleman in a pinstripe suit discretely knock on the wall. A panel on another wall opened and he walked through.

It seemed like a scene out of a movie, like there was some mob-run poker game or something behind that wall. I’ll always wonder about that guy.”

“One time I was paying inside at a gas station when a guy pulled in driving a loud truck connected to a boat.

I continued talking to the cashier and then glanced up to see the guy cleaning his windows WITH HIS TONGUE.

You read that correctly ladies and gentleman, a grown man was licking his car windows clean at the gas station on main street in Hicksville USA. I still tell this story anytime someone says they’re embarrassed.”

“I remember at work this woman decided to change her baby in the middle of the dining area instead of going into the bathroom and using the changing table.

I was so disgusted because it was a poopy diaper and i don’t know why no one said anything.”

“I sat down to relax at a park in NYC.

After a few minutes, an older man came into view, spread his arms out to the side, and just stood there.

Immediately, dozens of pigeons from the entire park flew over and landed on him.

They were on his arms, sitting in his hair like a nest, and at his feet. He wasn’t giving them food or anything, he just stood there for a few minutes letting them perch on him. Then, he walked away and they spread out around the area.

When he got to the other side of the small park, he spread his arms again and the cloud of pigeons flew back over to him. It was so bizarre and nobody reacted because it was New York. I think about him every time I see a pigeon.”

“A woman was outside my house at her car with her two toddlers.

The little girl needed to pee, so she pulled down the girl’s shorts and pants and lifted her to a face down horizontal position and she peed straight down into the gutter.

Literally never seen anyone hold a kid that way before. Genius or weird, I can’t decide.”

“Once I saw someone do a perfect cartwheel on the pavement at a busy intersection in the heart of town.

I’m talking flawless execution. I’ve never been able to do a cartwheel without toppling over, head-first, of course! Definitely made me question my life choices.”

What’s the weirdest thing you’ve ever seen in public?