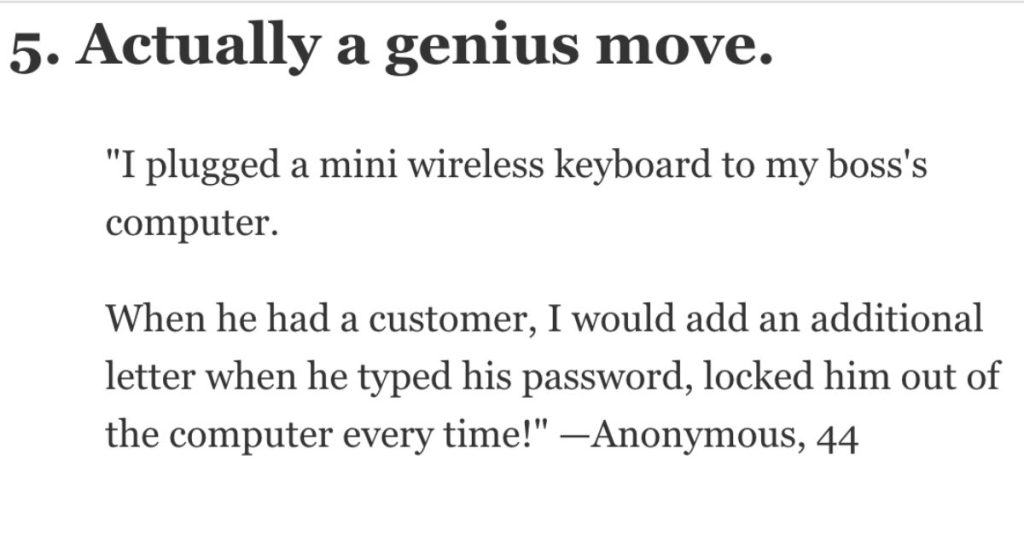 14 Evil Geniuses Who Got Petty (But Satisfying) Revenge At Work

They say that the best revenge is living well, but is that always true?

Some people might say yes, but in the event that “living well” is a way off (or poorly defined), perhaps something more satisfying (or petty) might be achieved in the moment.

These 14 people would definitely agree, because after being slighted at the office, they just couldn’t help themselves.

14. The gift that keeps on giving.

“My husband was the sole IT guy for our small school system. I had a principal who was harassing me daily.

So, my husband changed my principal’s passwords. It still makes me smile 20 years later.”

13. Some people get the cake they deserve.

“I incorporated a penis into a wedding cake. It was a dual stroke for my old boss and the bridezilla.

The bakery I ran was a nightmare, and after giving the owners a month’s notice, they started very verbally giving everyone raises in front of me. Part of the reason I was leaving was because they offered me a $17/hour raise if I stayed, after not giving me one for three years — where was that money the last three years?

They also started to allow my front staff to collect tips, which I had been fighting for for five years.

The bride for my final event was a nightmare, so I snuck a drawing of a penis in the middle tier of her cake which was covered with scroll work. The wedding was my last day, so I delivered it and never looked back.

I heard someone in the wedding party noticed and the bride had a fit. There was my raise.”

“My friend and I were finally leaving a very toxic job after many years of abuse from our boss. We created fake emails to leave very detailed negative Google reviews of the shop.

The boss advertised everything was fresh and made that day, though really it could be four days old baked goods. We called the shop out for this and so many other things. It got to the point where our boss was stress-reading the reviews to us in meetings.

In my last two weeks at the job, I was tasked with retraining every employee with these reviews, which were written by us, exclusively in mind for the training.

Instead of training the employees, I just talked sh*% with them about the job, our boss, all the inside drama, and secrets at the shop.

I also disclosed everyone’s salary, so everyone could know how disgusting our boss was about who they gave raises to because he only gave raises to his favorites. More than half the staff left within three months after I left.

I’ll never regret it, and I’m not sorry.”

“I am a classroom scheduler at a university. One faculty member, in particular, treated me like a doormat, constantly asking for ‘little favors’ last minute, and never thanking me.

So one semester, I put her giant lecture in the worst classroom on campus — five flights of stairs with barely any room to maneuver between the front desk and the board.

She didn’t get any better, but it did make me feel better to listen to her complain about the room all semester.”

“I used to work in retail management but was looking to transition to a new career because customers are largely awful. I managed to find a new job and had turned in my two weeks notice at my current employer, so I was in that nice period of just coasting at work.

Late one night, around fifteen minutes before closing, a customer came in to return an item that had clearly been worn multiple times. I was the only one working in the store at that time. I informed the customer that I could not process the return since the item was clearly used. She proceeded to curse me out, call me every name in the book, and then demanded to speak to my manager.

Again, I was the manager. So, I decided to be petty. I walked into the back room, put on a baseball cap and sunglasses, then walked back to the counter and said, ‘I’m the manager. How can I help you?’ She got pissed and stormed out.

I got a nice talking to from my district manager the next day, but I didn’t care because I only had a week left there anyway. It was so worth it to see the look on that entitled woman’s face when she didn’t get her way.”

9. This person has no regrets.

“I quit a particularly toxic job after just three weeks. Excessive emails was one of my reasons for leaving, so in my exit email, I dropped the worst offender’s email address as the sole contact for all future and ongoing queries.

I flooded her inbox with over 200 extra emails a day, and she deserved every single one of them.”

8. Mild annoyances are the way to go.

“I work at a gym and if someone is being a jerk, I will change their account number on their card so that the next time they come in, they’ll be held up at the door trying to figure out what’s wrong.”

7. This just makes me cackle.

“I used to work at a department store with a woman who was incredibly mean. She was nasty to the younger staff, always demanded people buy her lunch, and was just generally obnoxious.

She always used to keep her purse on top of a tall shelf in our back office. One day after she had been really rude to me, I went and took an ESA alarm sticker that we used on the perfume boxes and placed it sticky-side up on the shelf. When she came back from lunch and put her purse on the shelf, the alarm sticker stuck to the bottom.

For the next three days, she sent the door alarms off at every store she went in and out of, and had no idea why.”

6. I wish there was video of the fallout.

“When I was working for Domino’s we had a regular that would always order five minutes before we closed for delivery. He was always hard to reach once we arrived, rude, and never tipped.

One night, he ordered like five 20 oz sodas. Nothing else. I double bagged them and shook them violently for about three minutes before I knocked on his door.”

“I plugged a mini wireless keyboard to my boss’s computer.

When he had a customer, I would add an additional letter when he typed his password, locked him out of the computer every time!”

4. Be careful who you yell at.

“I worked as a service manager at an auto dealer. We had a drive-in to drop off your vehicle, and you’re supposed to leave your keys. One customer took the keys out of the ignition, even though they used the drive-in plenty of times before.

This was in the mid-90s, so it was just a plain metal key. I looked up the key number, made a key, and charged $5 on the invoice. When the customer came to pick up the car, the customer had a temper tantrum over the charge in front of a lot of other customers.

I took off the $5 and gave them the key. Over the years, that key cost them hundreds of dollars because I kept charging extra for any service performed.

Don’t piss off your service guy.”

“I was told I was finally getting a hard-earned promotion at my current company over a year ago. A few weeks later, my manager and skip level manager told me I was being denied the promotion because of something I said. They wouldn’t tell me what.

Out of spite, I went to HR and reported a previous incident of when my skip level manager angrily grabbed my arm during our company all-hands.

I got the promotion, and that skip level manager is no longer with the company.”

2. Talk about making a stink.

“I’m a nurse in a very busy ER. Sometimes the patient rooms get really dirty because we use a lot of supplies while treating patients, especially if we have to perform blood transfusions or CPR. We are fortunate enough to have housekeepers to clean the rooms, though there was one housekeeper who was so disagreeable.

She refused to tasks that were absolutely in her job description. One of these tasks was to empty patients’ plastic urinal bottles. After a patient left the room, she simply wouldn’t clean the room until the nurse emptied the bottle.

One day I was extremely busy and hadn’t got around to emptying the bottle in one of my rooms. I asked her to please clean the dirty room because I had a lot of medications to give and it’d really help out if the room was clean soon. She rolled her eyes and turned the other way.

I was furious that she refused to be a team player. So, I went in the room and emptied the urinal bottle…all over the floor and toilet. I went to her and told her that the urine bottle was empty, but it appeared the patient had also had an accident on the floor. She finally went in to clean the room, and also had to clean all that up.

I’m not proud of myself for being so petty, but I was happy that she always emptied the urinal bottles in my patients’ rooms after that.”

“One day, I was very strapped for money so for lunch all I had brought was a big jar of applesauce. Someone ate all my applesauce and left the empty jar on the table.

I did what anybody would’ve done — I opened the refrigerator in the break room and proceeded to throw out everything, while yelling at anyone within earshot, ‘If I’m not eating, nobody was going to be eating.’

I was summoned into the manager’s office afterward. The whole thing was captured by the camera directly above the refrigerator.

Luckily, they thought my freak out was hilarious and then they bought pizza for everyone.”

Wow, these are some evil geniuses for sure. I can’t help but be impressed.

Have you ever managed to pull off something like this? Let us know what and how in the comments!