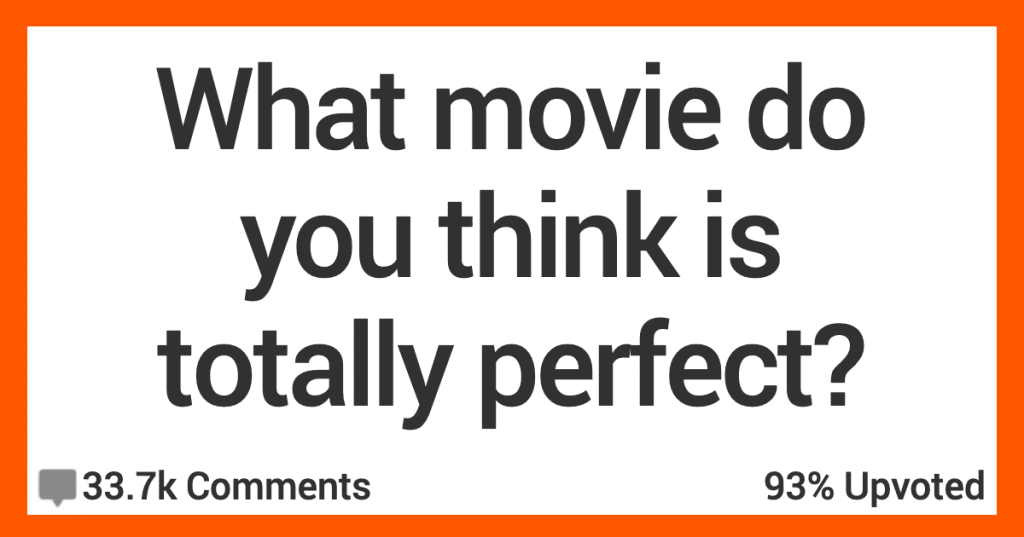 15 People Talk About the Movies They Think Are Totally Perfect

I love these kinds of conversations!

Because there are a whole lot of movies that I think are totally perfect.

Here are a few of them: Halloween, The Texas Chain Saw Massacre, Election, The Warriors…

Instead, let’s hear from AskReddit users about the movies they think are perfect.

Somehow a movie about 12 guys arguing in a closed room is absolutely riveting.”

I can’t think of anything else Disney has done that dives deep into a serious life issue with realistic rawness except Zootopia and a few of the Pixar movies. Lilo is one of the most realistic animated children protagonists with all her little quirks and you can feel and see how hard Nani is trying to balance sisterhood and parenthood.

It also functions well without a villain like an evil stepparent or foster parent. It’s just a social services agent who realizes the tragedy of the situation. Even with comedy from the aliens, it successfully balances the tone and allows you to realize the tragedy and rawness of the situation.”

I can’t really explain why because I haven’t studied films and stuff.”

My favorite movie of all time.

Aliens always gets mentioned, but the original was always the best.

Sci fi horror at its best.”

“One Flew Over The Cuckoo’s Nest.

One of the funniest movies I have watched and I still quote it in regular interactions.”

7. From the Coen brothers.

The performances in this movie by Frances McDormand, William H Macy & Steve Buscemi were all career defining performances but what I don’t see mentioned enough is how the movie is an antidote for Tarantino style of criminals.

Pulp Fiction is out of this world but it led to every director trying to write smart well read criminals who talk about TV & movies, a big example would be Bad Boys, whereas the Coens created idiotic criminals who keep making mistakes & aren’t cool in anyway.

They even start the movie off by messing up the time for their meeting.

I’ve watched this movie so much, I think I could quote it in my sleep.

“I never had any friends later on like the ones I had when I was twelve. Jesus, does anyone?””

I still marvel at the scene where Salieri is looking over Mozart’s music and is hearing the music in his head as he is reading the notes.

Can people really do that?”

The sense of dreary dread throughout the movie is absolutely f**king perfect.

The movie is absolutely fantastic.”

The research station at the South Pole has an annual tradition… at the start of the winter-over, when they’re totally isolated and it’s always night, the whole crew gets together and watches The Thing and The Shining back to back.”

This is my #1 favorite movie.

I’m in awe every time I watch it, every like seems line it’s crafted to perfection.”

Everyone talks about Joe Pesci, but Ray Liotta was a perfect sleazeball.”

11/10 would go back in time to watch it for the first time again.

Still blows my mind it’s 4 years older than me watching it nowadays.

Best movie of all time.”

What do you think is a perfect movie?