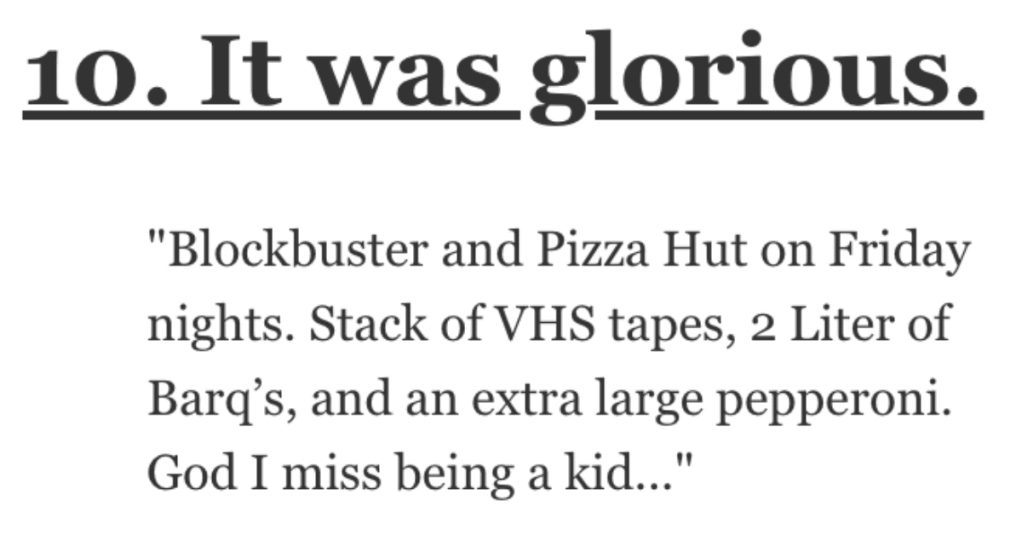 24 People Discuss What They Miss Most About the 1990s

Do you want to know what I miss the most about the 1990s?

No cell phones! And it was amazing!

Listen, I love my iPhone, but there was something really fun

“Really was a great time in music.

The sheer diversity of what was popular was incredible.

On the radio you could hear “Lithium” by Nirvana, and then Chris Isaak’s “Wicked Game” right after it.”

The 1990s was this oasis of calm in between two paranoid decades.”

The pace of leaving school/work and not having to deal with there nonsense till tomorrow.”

I spent so many hours exploring, reading things. Every webpage felt like I was visiting someone’s house, they were so personal  because design standards did not exist yet.

I enjoyed my netscape navigator. And I LOVED my IRC chat rooms. Keep in mind I was like 9 and 10. lol, so I mostly spent time in Pokemon Chat rooms that had bots.”

5. Used to be different.

Loved ones could walk you right to the gate. You could bring snacks, sandwiches, and drinks onto the plane with you. The prices at Hudson News were perfectly reasonable, because if they weren’t, you could just walk out of the terminal and grab something.

I used to fly 3 or 4 times a year, and it was usually pretty easy. Now, I fly maybe once every five years, and I absolutely dread it.”

6. Before the Internet took over.

“We didn’t live online yet. The internet was in it’s infancy and was a fun way to pass the time, but it hadn’t consumed us.

Business was still being done in brick and mortar stores, our social lives were offline, etc. There was almost nothing to be purchased online, other than the online bookstore called Amazon.

Pretty cool because they had a bigger inventory than you could fit in a building. And so it began.”

“Going to the mall, and hanging out with friends.

Malls were awesome, and I h**e that the strip mall style has taken over. Especially up in Canada, where it gets to -40 in the winter. Back in the day you could legitimately spend hours wandering the mall, indoors and warm.

Now it is depressing. Maybe the big malls like Mall of America or West Edmonton Mall are still okay, but the ones in my city are s**t.”

“”What should we do tonight?”

(Grabs keys to go to Blockbuster)

The effort in getting up and moving off of your couch made the movie more worthwhile, even if it was kind of a s**tty movie.”

Stack of VHS tapes, 2 Liter of Barq’s, and an extra large pepperoni.

God I miss being a kid…”

I miss taping stuff off the tv, hanging out in my room , still playing with toys, reading cool magazines, going through my card collections.

The hype of the cinema back in the 1990s. Not being a slave to technology, but still having wicked gadgets like Walkmans.”

“Before we had mobile phones, my wife and I would plan to meet at a certain street corner at a certain time after work.

We sometimes had to wait for the other person to show up, but we knew they would.”

I was just a kid/young teenager but I only knew my best friends intimately. The rest of my class I didn’t know or care.

Now it’s like all your followers are in your bedroom/home when you post to social media. Anyway.”

“Magazines! Everyone had their favorites for what ever hobby or interest you had.

For me it was Guitar World, picking up the issues with bands I loved and plinking along to the Tab on my c**ppy electric guitar! For my wife it was 17, checking out the most recent trends! Or Thrasher when it was just a skate magazine and not a clothing brand.

Even Rolling Stone was a big deal for mainstream artists. Then those of us into an alterna crowd there were tattoo mags like Savage. Me and my wife used to scour our local 7-11’s waiting for the new issue of Savage to show up!

I get that you can find blogs, etc online with the same info and most of these mags still exist but it’s just not the same!”

“Music felt more special because you kind of had to take some risks when buying a CD.

At best you could listen to it at one of the stations in the store, but other times you might have heard a song on the radio or watched a music video on MTV.

I bought some albums where only the song I liked was good, but still tried to appreciate it all. And then you had some albums that were legendary and you could bring to friends houses just to share and listen to.

Don’t get me wrong, I am still amazed and appreciate having pretty much any song on my phone, but the lack of access was a fun time. The discovery and sharing was just different.”

“I miss living a non-monetized life.

Presently, I feel if there’s a way to charge someone for doing or thinking something/anything, it’s been or is being implemented.

And f**k subscriptions for EVERYTHING.”

“This is going to sound depressing but I was in my teens and had optimistic hopes and dreams for the future, both for myself and for the world in general.

It’s all been replaced with misanthropy, I’m pessimistic about the future and have very low expectations of what’s to come for humans including myself.”

It was my peak Computer gaming time too with hours spent on several Sid Meyer, Maxis and roller coaster tycoon games.”

“There was a large goth scene.

I like the goths. All the ones I knew cared for each other, were good people at heart.

Might have a tough exterior, but they were the kind of people you want around when you are feeling unsafe, or had a mental health crisis.”

“The variety of music that was popular all at once.

Just look at the lineups for Lollapalooza and the Warped tour.”

“1990s cartoons were so much better than they are today.

Kids these days are like little grown-ups, they don’t have a childhood as we did back then.”

“Honestly the thing I miss the most, and the thing that is so hard to explain to modern kids, is “hanging out.” Before cell phones, people used to just go to each other’s homes, or to some public space, and just spend time together.

This continued well into the internet era but smartphones large k**led it. Early cell phones were very basic and functional, basically just like having a landline in your car/bag/pocket.

You could call someone or receive a call, but what did you say? Most of the time it was just making plans to hang out in person. You weren’t using the cell phone for long phone calls just to chat–those minutes were expensive.”

“I miss that there was less pressure to be perfect.

Nowadays due to social media, especially sites like Instagram, so many young people feel like it’s necessary to always be dressed well, always wear a full face of make-up, etc.

Sure, we had unrealistic beauty standards and plastic surgery before, but to me it feels like it’s gotten much, much worse and also much more uniform than before.”

“Pearl Jam, U2, Radiohead, and the Smashing Pumpkins consistently putting out good music.

Not having to worry about every movement you make being tracked on cameras.

If we go pre-Contract with America, politicians working across the aisle. Blockbuster.

The world before 9/11 and the Patriot Act, when Echelon and Carnivore were in their infancy and not an existential threat.

Nerd culture being a well guarded insular fiefdom that outsiders didn’t understand or care about.

The incessant cage match of Brit Pop bands working their a**es off to outdo each other.

Local retail businesses that hadn’t been wiped out by big box mega corporations.

That’s the tip of the iceberg, but that’s what comes to mind.”