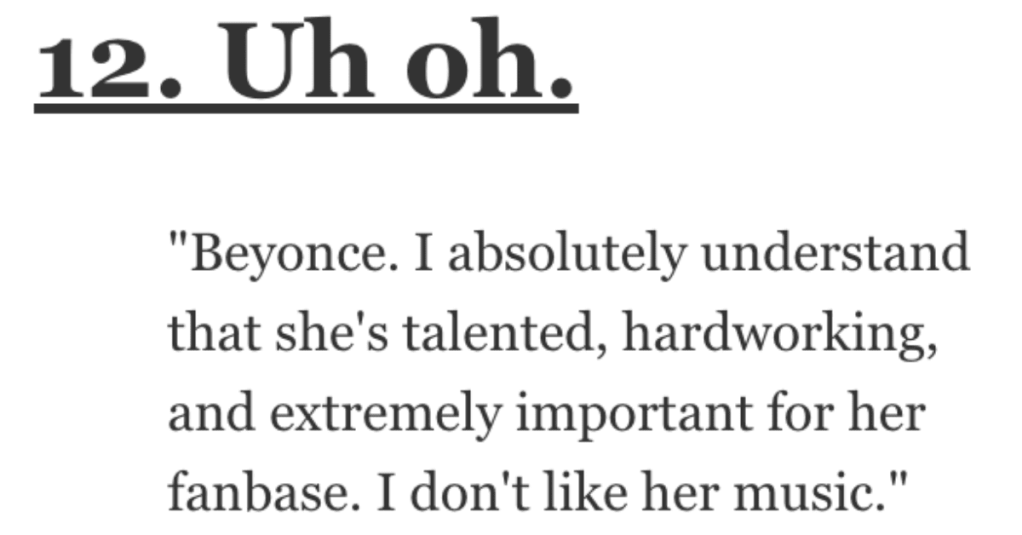 I know what I have to say about this…

I really can’t get into jam bands.

And a lot of my friends are super into that stuff…but it’s not happening for this guy.

Let’s see what other things AskReddit users can’t get into despite their popularity.

Its a good show, don’t get me wrong, but I don’t get all these people who are making it their entire personality.”

“Drinking. And the bar culture. Never got into it.

Always just bummed me out seeing all the same people at bars every night. Not for me.

Everyone raves how it’s so good but I could never get into it.

Survival was too slow and boring, and creative is sometimes fun for building lavish houses.”

I watched it once because my friend wanted to and I’m nice. It was just ladies eating salads and giving each other meaningful looks.

They are all very pretty but not interesting at all to me. I don’t get it.”

I always thought the two brothers looked like people I’d avoid in the street, and their singing style was similar to that of a dirge.

So glad they’re not in the charts anymore.”

Watched the first episode and felt meh about it.”

I’m just a blank face when people rave about it because I’ve not seen it.

Think I watched one walking dead episode and it was just beyond gore, despite loving Andrew Lincoln from Afterlife.

Seen quite a few episodes, as have been in the room when other people are watching it, and just can’t understand why so many people find it funny.”

A lot of people I know date a lot, I don’t really see what’s so great about dating around as much as they do.”

“I never got a Facebook account back when it was all the rage. I couldn’t have cared less about it.

I always thought it was funny that people bragged about how many “Facebook friends” they had, like that equated to friends in real life.”

I absolutely understand that she’s talented, hardworking, and extremely important for her fanbase.

I don’t like her music. I don’t care for voice. She just doesn’t do it for me.

I don’t find something like Lemonade personally appealing. Part of it is my age: I grew up on Tina Turner, Aretha Franklin, Whitney Houston, and Donna Summer, so I didn’t need Beyonce the way that Millenials did.

I think that’s actually spread to a lot of currently popular musical artists. I wanted to like Taylor, Billie, Lizzo, Cardi, but I’m just not clicking with a lot of contemporary music, and contemporary female singers specifically.

I think it has a lot to do with not caring for current production styles. That means that, come 2036, I’ll discover all of today’s music and it’ll be brand new to me, but in the larger historical contexts I love.

Now cue all the Beyonce insanity in the comments.”

Someone I knew in college told me about Bitcoin back in 2011. She encouraged me to throw $100 into it “just in case it takes off.”

“Game of Thrones was a phenomenon so extreme that for nearly 8 years it was all anyone talked about, an instant conversation starter.

Many people hosted watch parties with large diverse groups of friends and family. There is no reason we all should not have rewatched it like 4 times by now, but the ending was bad.

It was so bad that it retroactively ruined the beginning. I’ve never seen something crash so hard.”

Which makes me think im getting old even though I’m not that old.”

“As a guy, being an enthusiastic sports fan and watching sports a lot on TV.

I appreciate athleticism and can enjoy watching a game or a match, especially live. I’ll attend a football game watching for social reasons and for the beer.

But I have never even gotten close to the commitment, knowledge and passion that most guys seem to have about watching other men play a game.”

I never like the overall style of them and seeing as there are so many of characters I like, it looks like I’ve saved a small fortune by not getting into collecting them.”

“There are some funny tweets, sure, but it’s not nearly enough to make me go into it.

I just can’t get what’s so cool about it.”

I don’t know what is wrong with my eyesight/visual acuity, but I cannot process things that move fast on a screen (don’t worry – I don’t drive either).

My parents didn’t let me read the books as a kid because “witchcraft,” and I’ve never gotten enough motivation to make the time to go back and read them now as an adult.”

“I tried SOOOOOOO f**king hard to get into Fortnite because I loved the concept and it sounded really fun.

I spent about a month playing a couple games a day, thinking it’ll grow on me, but it never did and eventually I just kinda forgot to play it

I still love the concept behind it l, but the gameplay just felt so dull

This isn’t a case of me being had at the game, I actually won a few times, which was part of why it took me a month instead of a week or a few days.”

“Fidget Spinners, back when they were popular.

I appreciate what goes into making them and understand the appeal but even after landing a small role in one I couldn’t get as excited fans around my age.”

“Reality shows. Every one of them.

All the way back to MTV’s Real World.