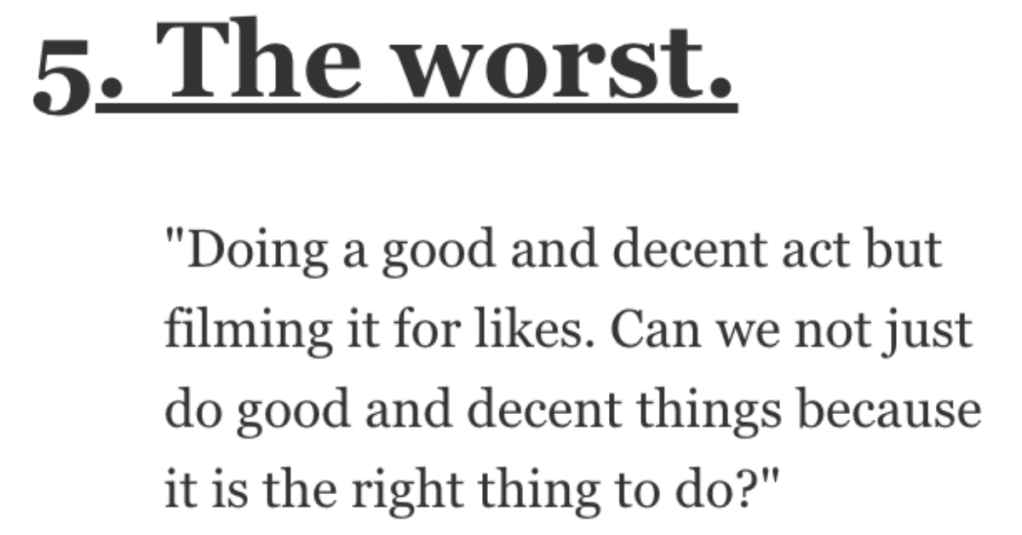 25 People Talk About Toxic Behaviors That Are Socially Acceptable

Maybe it has to do with how prevalent social media is in our lives these days, but it sure seems like people don’t really know how to treat each other with respect anymore…

And I wonder what’s really behind it…

Whatever the case, take a look at what these AskReddit users had to say about toxic behavior that is socially acceptable.

And see if you agree with them!

“People one upping your hard times after you tell them to someone, “oh your day’s been bad? Well you wouldn’t believe mine”.

“The idea of keeping contact with toxic family members just because they’re family and the pressure that resides around it.”

3. Dads have emotions, too.

“Not caring how the dad is doing after pregnancy.

I struggled with depression and no medical expert really gave a s**t.

I brought it up and was met with eye rolls and “oh yeah its so hard for the dad” not saying its as hard but dads have emotions, too.”

“Snooping in your S.O.’s phone or social media.

“Doing a good and decent act but filming it for likes.

Can we not just do good and decent things because it is the right thing to do?

I understand filming for safety sake or for awareness. However, all these ‘feel good’ videos circulating on social media just make me sad.

You are using somebody in a bad situation for internet likes.”

“As of late, narcissism. Almost everyone is guilty of it to an extent, but we’re getting to a ridiculous level of it.

News flash, no one’s perfect, and sometimes the people telling you that you’re wrong are your best friends, and the ones telling you you’re right don’t care about you.

It hurts sometimes and I know I’ve been on the receiving end of it, but I’m always thankful for the friends who told me what they honestly think of my behaviors instead of just being yes men.”

“Casually joking about disliking your partner or wanting to leave them or wanting something bad to happen to them and also jealousy or threatening harm if your partner literally exchanges words with another person.”

The worst part of this is there’s a weird exception for anger. Like men are supposed to suppress all their emotions except the most destructive one.

I’m a fairly stoic person, I never show my emotions, but I also apply this to anger.”

“Making everything a competition. How much you work, how much you earn, how much money you have, how much time you spend doing x, how much faster you are at y, etc.

Who cares if it doesn’t make you happy? If you’re only happy because other people are, by your subjective metrics, worse than you, you should probably seek psychotherapy to help balance your life in a healthy manner.”

Everyone looks like a model these days (only on social media, though).”

“Taking your work with you on vacation.

I mean if you enjoy working then that’s your thing, but I get sick of people like going through paperwork and having meetings while on vacation.

“Interrogating someone about their private relationship.

I had a girl tell me I shouldn’t be with my boyfriend because we didn’t talk 24/7 and she couldn’t understand why I wasn’t glued to his hip.”

“Telling someone “you need a boyfriend/girlfriend.”

No one needs a bf or gf, some of us are happy single, and I know what’s best for me more than you do.

Just because you are insecure or unhappy on your own doesn’t mean that I am.”

“Trying to make people drink/smoke or drink/smoke more when they have firmly declined the offer.”

“Humiliating your kids by making videos of you pranking/fooling them and then posting it online.”

“Overworking yourself and then collectively judging others who don’t do the same.

The fact that some people are proud of getting very little sleep is sad, especially since the effects of sleep deprivation are d**dly.”

“Oh my god there’s this thing right now where some Latina women are like unashamed and calling themselves “tóxica”.

They’re admitting their jealousy, their pettiness.

And then there’s guys, even calling their girlfriends toxic. “La tóxica de mi novia” but like it’s funny, like it’s cute and or just normal.

“People tend to give drunk people misbehaving a pass if they regularly do it.

That just reinforces that toxic behavior.”

If I could change the laws tomorrow I’d encourage businesses to ban pieces of garbage like these who can’t operate in public.

The Starbucks barrista shouldn’t have to pay for your s**tty attitude.”

And then the companies blame the victim and say things like, “Well, they just didn’t fit in with the ‘culture’ here.”

I’m sure culture in some workplaces is important, but whenever I hear employers or recruiters talk about “culture” I just hear “a**se.””

People need to be doing simple, harmless stuff, like rotating plates of food when people aren’t looking, or hiding post it notes under computer mice with confusing messages on them.

Not this s**t that causes jump scares and risks people having a heart attack or stumbling and hitting their head.”

“Pretending that everyone has to be perfect 24/7.

We can’t have mistakes or bad days or just be an a**hole without people grabbing their pitchforks.”

I just got asked this the other day. It was awkward af explaining that it’s a bit late for me age wise, and kids just aren’t for me, anyway.

People need to mind their own d**n business!”

“Burning yourself out for ‘the hustle’ and/ or ‘the grind’.

I realized that my workaholic tendencies were actually a subconscious distraction from facing my emotional and psychological traumas.

And I was falsely chasing the “high” of achievement for external validation and the dopamine hit of self-worth.”

“The whole attitude of going to work sick, even with something like the Flu or Pneumonia, and that employee wearing it like a badge of honor. WTF.

I’m about to start a round of Prednisone for an autoimmune flare and this ‘ol boy without a mask waltzed into our office yesterday bragging somewhat how this is his 2nd time getting Covid and he apparently tested positive right over a week ago!

What is wrong with people?!”

How do you feel about this?