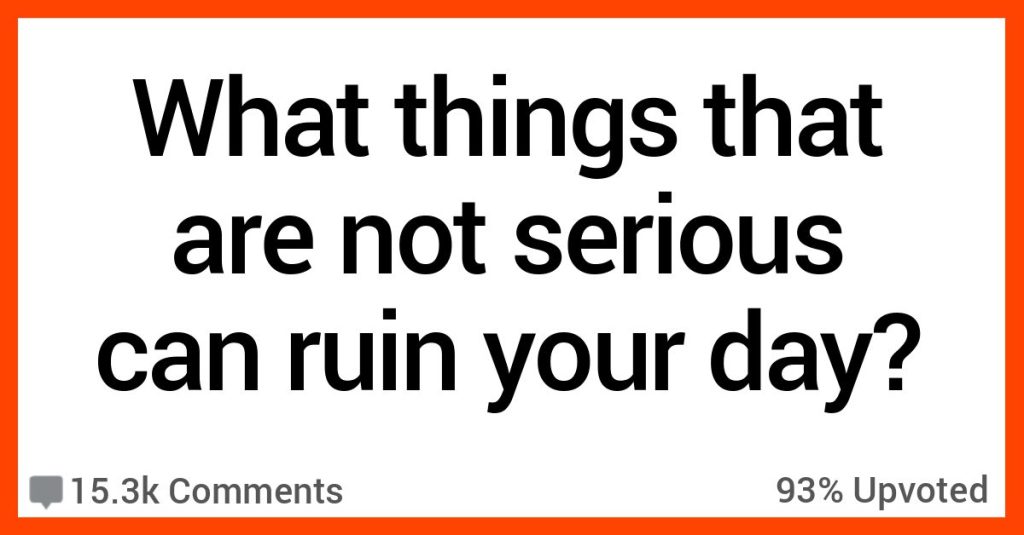 If you happen to be like me at all, sometimes you let little, dumb things ruin your whole.

I know that it’s not a good thing and I’m trying to work on it, but I’m still guilty of letting it happen from time to time…

Do you let things that are not serious ruin your day sometimes?

“Having to get gas before work.

The worst part is that you knew you needed gas the night before, but thought, “I’ll just get it in the morning”, but overnight you forgot about it and then realize once you’re in the car again.”

“We need to talk”

Those two, one variation for work and the other for personal, are the worst. There’s no context, no stated reason for needing to talk. Only dread.”

“Being excited and extremely happy about something and then telling somebody, only to be met with either a disappointing reaction or even being told that what you’re excited about is “childish/silly/not interesting”.

Happened way too often to me so I don’t share many things with others anymore.”

“I know this isn’t true for all people, but I know I’m not the only one:

When someone takes my parking spot at work.

It’s not a big deal at all, but whenever it happens I feel like my day will suck.”

“My dryer not drying my clothes all the way before work in the winter.”

“Dropping something or getting your earbuds caught on something and yanked out of your ear.”

“Thinking the to-go lid on your coffee is properly secured when it is not.”

“When you hit any part of your body on an inanimate object.

God, I just get so mad at the object/myself.”

“Not finishing a good dream.”

“For me, it’s that moment you drop a spoon or something, physics breaks, and it just bounces off every single surface on its way down making as much noise as a spoon like object could possibly make.

It just feels like it takes forever to finally stop moving.”

“When you’ve already left the house for the day and realise you are wearing undies that give you a wedgie.”

“Accidentally biting the inside of your cheek HARD when chewing your food.

For some reason when that happens to me it repeats itself about 3 times shortly after. It’s like a small electrical jolt that makes my jaw suddenly snap shut on that cheek even though I was trying so hard to avoid it.

“You ever been craving something and postpone it for a certain day, and then when it’s that day something happens and you don’t get to eat that?

Made a steak one night, I had half then put the other half away for the next day. I got home, after craving it and thinking about it all day, open then fridge and my roommate had eaten it.

“Getting in the most comfy position in my bed, but the sudden urge to pee arises.”

“Waking up to the wet choking sound of your cat or dog puking on carpet, with just enough time to hear it happening but not enough to prevent it.”

“It’s going to sound stupid, but back before the times of all online schooling/social distanced sxhooling – someone taking your seat in class.

Doesn’t matter if it was high school or college I would get very put off from not being in my seat in class. I was told once it’s probably connected to anxiety or something but ehhhhh.”

“Food I had left at home that I was looking forward to eating after a long day at work being guzzled down by a family member.”

“Wrong coffee order. It kills me for the day.

I know it’s not a big deal and I can’t get mad at a little mistake but f*ck, not my coffee.”

“Being on hold with customer service for over an hour and then getting hung up on.”

“Feeling good about yourself and then walking past a shop window or something and catching a glimpse of your own reflection.

“Getting a flat tire.

If you know what you’re doing you can have it fixed and be in your way in 10 minutes, but now your day is ruined, your mood sucks, and you’re going to probably have to pay for a new tire.”

“For me, it’s my wife talking about planning things before my 1st cup of coffee.”

“Hearing rumors/ lies about yourself.

“Repetitively getting cut off talked over mid-sentence when discussing things in the work place.

I’m speaking because I believe I have something to add. Being talked over repeatedly then, having folks do it on purpose after they realize it’s my tick completely deflates me.

It enforces the notion of not being valuable to the team, and I shut up.”

“Not being able to sleep the night before.

Spilling coffee on yourself right after you get dressed.

Cat puked on the carpet.

You open a weird book and unleash a demon older than the world, and the cafeteria is out of a lot of stuff.”

In the comments, tell us about the small things that can ruin your whole day.