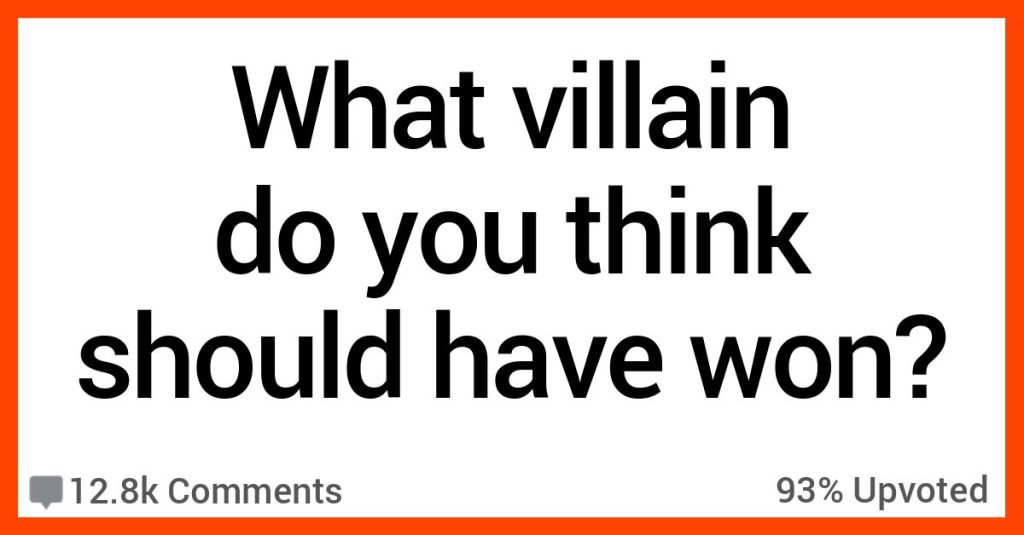 32 People Talk About the Villains They Think Should Have Won

Do you ever watch movies or read books and think that the wrong person won? That the “bad guy” was actually just mistreated or misunderstood?

If so, this is the thread for you.

These people are rightfully indignant about the treatment of these villains, who they think definitely deserved a hero’s welcome instead.

1. I think the U.S. government is the real villain here.

General Francis Hummel, from The Rock

Even he knew they only care about exploiting our deaths for political capital.

That scene in the shower room with the Seal Team tells you everything you need to know about the US military.

The US government sent military personnel to kill other military personnel that they had driven to the brink. Michael Biehn’s line, “We’ve spilled the same blood in the same mud” is an implicit acknowledgement that he recognizes the betrayals of the government as valid. But, he’s still a victim of the indoctrination process that Hummel has been shocked out of. So, you end up with an absolutely tragic, senseless slaughter of young men who probably signed up just out of high school.

Hummel’s only misstep was his unshakeable belief in the loyalty of individual Marines. He assumed that everyone on the mission was as principled as he was, when most of them were just doing what the government had trained them to do – follow orders, and kill people for money.

2. Our kingdom for a different ending.

Night King wins. Humans have to move south after they lose the north. New wall is created out of fire from Daenerys’ dragons.

John Snow becomes King bc hes the only one with enough expertise to lead the humans against their common enemy, and bangs Daenerys to continue the Targeryan bloodline.

Greed from FMA. Technically not the villain but ya know I just wanted to see that guy succeed in his endeavors.

He did kind of, greed was insatiable and could never really win, but he went out satisfied and kind of happy that he achieved one of the things he never expected to get, and he got revenge all at once

Michael Myers in Halloween Kills I hated everyone in that town.

I’m fairly certain he was the hero in that film. Hell it didn’t have a protagonist.

Robert De Niro’s character in Heat … he should have killed Pacino and gotten away …. I cant watch that movie because of the ending !!!

He broke his own code. He said he will drop anything if he feels the heat, except apparently revenge.

Any story where the villain was defeated at the last moment by the hero pulling some deus ex machina out of their ass, or trying some desperate million-to-one chance. Particularly where the villain has been shown to be intelligent, competent, not prone to emotional outbursts, and smart enough to have multiple backup plans.

It’s rather annoying when the author then proceeds to hand them the idiot ball purely so that the hero can win a fight they should never even have been able to make it to in the first place.

Interestingly enough, I don’t actually put the destruction of the first Death Star in Star Wars into this category. The Rebels found a weakness, based an attack plan on it, followed it, and even if Luke hadn’t been there with a skillset very well suited to the plan, any other Rebel pilot might have been able to make the shot.

The end result might have been assisted by Han showing up unexpectedly, but the original idea was still solid.

The Fiend Bray Wyatt against Randy Orton at Wrestlemania.

I honestly thought this would’ve been open and shut. Fiend’s a great character, and he could use some revenge after being (checks notes) burned alive. Also, the Firefly Funhouse Match against Cena last year is praised as one of the best cinematic matches ever, mainly because it covers basically Cena’s entire career, AND an alternative universe where he turns heel.

I thought “okay, Fiend vs Orton, Firefly Funhouse. Fiend wins. Should be good.”

Somehow, it wasn’t a Funhouse match, but instead a normal match. Okay, I can deal. Then Alexa Bliss distracted The Fiend, Orton hits a single RKO, 1-2-3.

Magneto. A Jewish concentration camp kid who grew up in a Nazi filled environment, only to be tortured. Parents gone. Family none. Lost his only real friend over politics. And spent the rest of his life making sure mutants were safe and free from human experimentation.

He only wanted what was best for his people that suffered like he did for having abilitys they never asked for. In the end he got his safe haven, but unfortunately it was all in vain.

Superman’s one weakness is kryptonite, but he can still throw a continent made of it into space?

I know it’s a long time ago but wow, that is some bulls*%t.

Jaws… my man was just hungry- did not deserve to be disrespected like that!

Those people were in his natural habitat- yet they were so shocked when he attacked. Not like he climbed out of the water, went knocking on peoples doors and killed them.

Captain Barbossa. He was vilified for being a better pirate than anyone else, and he only wanted to escape eternal damnation and a hell on earth. I’d be pretty ruthless in that situation too.

Yes, he mutinied Jack, but he’s a pirate! And even then, he has much more class and honor than most of the other pirates.

12. His daughter loves him.

I always liked that even though his ex-wife Charlene paid a huge amount of alimony towards him, they were on friendly terms and that he was trying to be a good father for Vanessa.

The best moment was some guy on a motorcycle hitting on her in front of him and he says “She’s SIXTEEN!” and uses a zapinator on the guy.

13. If only they could have seen the future.

In the social network. Anyone that could have stop Zuckerberg.

The Phantom of the Opera was ostracized and abused for having a facial deformity.

If others had accepted him, he could have been amazing for the theater, both as a teacher and in leading roles.

The Grinch. In the real world his plan would have worked.

In the real world if everyone woke up Christmas morning and Christmas was just gone, they wouldn’t hold hands and sing songs… there would be blood in the streets.

Mojo Jojo. He was actually a really nice person onc e you got to know him.

Honestly there should be a serious movie about a villain winning with their vision to (cleanse the world and bring peace) and actually bringing peace after they win.

Then the story leaves us wondering who the real villain was

I dunno, the villain from The Rock just wanted to get veterans their disability and veteran wages.

He’s just trying to be a f**king whale and people keep trying to harpoon him.

“….That’s why my favorite book is Moby Dick. No frufu symbolism, just a good simple tale about a man who hates an animal.”

The older I get the more I sympathize with Captain Hook.

Peter Pan cut off Captain Hook’s hand and fed it to the crocodile as a joke. Can you believe Hook is hell-bent on revenge? It’s just a prank bro.

Mr. Freeze is a fictional character. He’s spending the money he stole to find a treatment for a fatal ailment.

That Arkham Knight storyline with him was heartbreaking.

Most of the time, he just wanted to chill, vibe, and get rid of that mustache creep in tight clothes who hangs out with kids way too much.

Lazy town is home to a monster who forces hard working tax payers to exercise against their will. Robbie Rotten is a freedom fighter trying to liberate the people and the media has warped the narrative to show the oppressor as the hero

22. We can all identify with a little revenge.

The villain in Sherlock Holmes: A Study in Scarlet. I think his name was Hope? I forgot completely.

Either way, I couldn’t help but sympathize with his quest for revenge.

The Rabbit from the Trix commercials. My man literally spent his OWN MONEY to get this own Trix cereal, and then those dang kids stole his property, saying “lol Trix are for kids!”

Back in the 90’s he did get to finally have Trix after winning a race or something and the prize was a bowl of Trix.

They found out it was the rabbit and you had to write in to let them know if he should or shouldn’t get to have the Trix.

The dad from the LEGO Movie. He didn’t know the toys were sentient and didn’t want to be super-glued, he was just a guy with a hobby who didn’t want his kid destroying his creation.

He got his kids their own Legos so they had no reason to mess with his world. As someone with siblings who used to wreck each other’s lego creations all the time, the end of the movie and portrayal of the dad as a bad guy for just having a hobby bugged me.

Scorpio, Hank. He appeared like such a kind person.

“On your way out if you want to kill somebody, you would help me a lot.”

I say this every time a fellow employee tells me they’re quitting.

He kept his end of the deal but Hercules gets to cheat and punch him in the face, always pisses me off lmao. It’s why I can’t watch that movie.

27. Can you even imagine living next to those two?

Imagine having loud and annoying neighbors on both sides of you, making it difficult to get any peace and quiet in your own home. At the very least, you can have some solitude in your job at this restaurant that no one ever really visits anyway.

…And then your neighbor applies for the job, passes with flying colors, and attracts loads of new customers, not only making your job busier and livelier than what you signed up for, but absolutely decimating that home/work balance you once had.

I always wondered why he didn’t just order ACME catering. I’m sure they must have had freeze dried Roadrunner, tinned Roadrunner and a bunch of other Roadrunner products in that d**ned catalog.

The giant from Jack and the bean stalk even thou he’s not the villain.

Yeah jack just intruded on his home, then f**king killed him when he tried to shoo him away.

Like, what the hell man? What is this story trying to teach? Breaking and entering is ok?

Tom from Tom and Jerry.

Man, when I was little Jerry had me crying. I was going to sleep mad because I couldn’t beat him up.

Me and my brother actually HATED mice because of Jerry and would stay up plotting against Jerry. My parents had to ban Tom and Jerry around and after dinner hours.

I always wanted Azrael (Gargamel’s cat) to catch and eat a Smurf.

There are so many useless smurfs too, he can eat one of them

Pagan Min, Farcry 4, not really a tragic story, and yes he was bit of a royal dictator, but it was either him, who would then pass it off the MC, or the rebellion leaders where it would become an overly religious land that executes anyone who doesn’t share the same religion, or a drug country with child soldiers used to protect the fields

Yeah nah I’d choose the bad guys in this game.

I’m definitely thinking about some of these in a different light, how about you?

Do you have a pet villain you’d love to see flip the script? Tell us your reasoning in the comments!