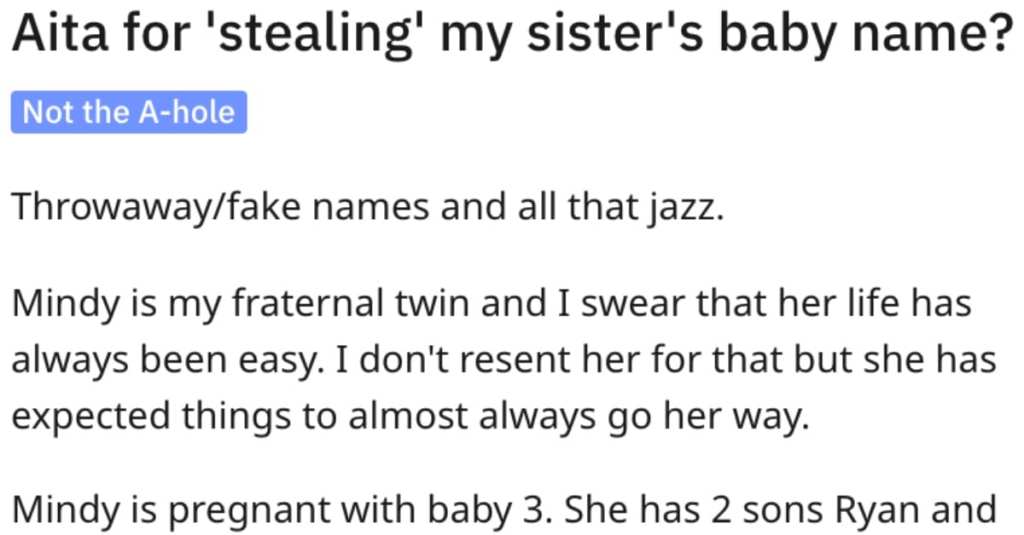 Am I a Jerk for Stealing My Sister’s Baby Name? People Shared Their Thoughts.

I don’t have any kids, but I have noticed one thing…people get really worked up about baby names. And things can get ugly if someone feels like the baby name they had in mind gets “stolen” by a friend or a family member.

And that’s exactly what happened in the situation we’re about to dive into.

This person took to Reddit’s “Am I The *sshole” page to ask for advice from the readers there about a sticky situation with her sister.

Here’s what went down…

“Mindy is my fraternal twin and I swear that her life has always been easy. I don’t resent her for that but she has expected things to almost always go her way.

Mindy is pregnant with baby 3. She has 2 sons Ryan and Dave, who were named after her husband’s grandfather and father. She’s having a girl and is ecstatic. They planned on keeping their name a secret until the birth.

After an awful year, my fiancée Amy surprised me with a cat. She had planned on surprising me over the holidays but a lot of shelters were tapped out due to pandemic adoptions. The shelter had named her “Ellie” and I teared up cuz that was my nan’s nickname.

She died two years ago and my life still feels empty without her. Ellie’s sweet demeanor and loving spirit made me feel as if she were a gift sent by Nan herself. We decided to keep the name as it was as a tribute to her, which Amy thought was sweet and that Ellie was perfect.

I don’t use social media much but I decided to post a picture of Ellie snuggled up between Amy and I as a way to introduce our fur baby to the family. I wrote a small blurb about how fitting it is that she shares a name with Nan due to her sweetness, posted it and forgot about it after an hour or so.

Mindy called me yesterday and started screaming at me for being a coward and ignoring her. Turns out she planned on naming her daughter Eileen after our nan and having everyone call her Ellie. Apparently she unleashed her fury on my private post and berated me for not responding later in the night.

I was in no f*cking mood and hung up on her instead of stooping to her level. She wouldn’t stop calling me so I texted her to chill the f*ck out and until then I blocked her and her husband because he started on me after blocking her.

When Amy came home she showed me all of the awful things that Mindy had texted her. I did my best to calm her down and Amy went to take a hot bath.

I called my mom. Sadly I knew that she wouldn’t listen to me. She told me that she knows I was close to Nan but the name is better suited for a baby. I told her that’s ridiculous, she said Mindy is hormonal from the pregnancy and “to be a good sister.”

I snapped and asked her where Mindy’s compassion was when I learned that I could never carry my own child. I called her up crying that day and she brushed me off, saying I was being overly dramatic. I asked her if she knew what a hysterectomy was. She went quiet. We didn’t speak again until after I had recovered from the surgery and tried to act like nothing happened. I still resent her for this.

My mom told me to grow up, that this name was important to Mindy. I swung low and asked her where Mindy was when Nan died? In Vegas with her friends even though she was told Nan wouldn’t survive the weekend.

Mindy wanted the name for the glory, I loved Nan and won’t rename MY fur baby. Mom called me a selfish little c— hung up and blocked me.

I feel so crazy. Amy and my dad seem to be the only people on my side.

Oh, boy…I bet you didn’t think this was gonna be about a cat, did you?

Well, as you already know, people are strange…so let’s see how Reddit users reacted to this story.

This person had a simple idea about how to resolve the situation. 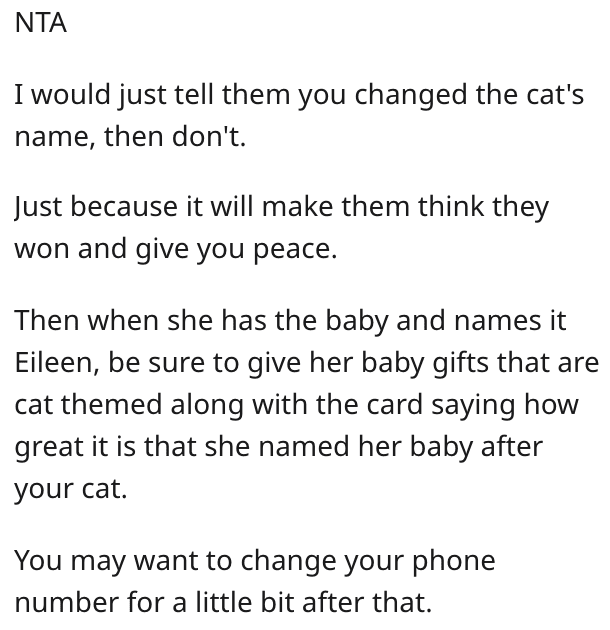 Another reader pointed out the obvious: what’s the big deal? 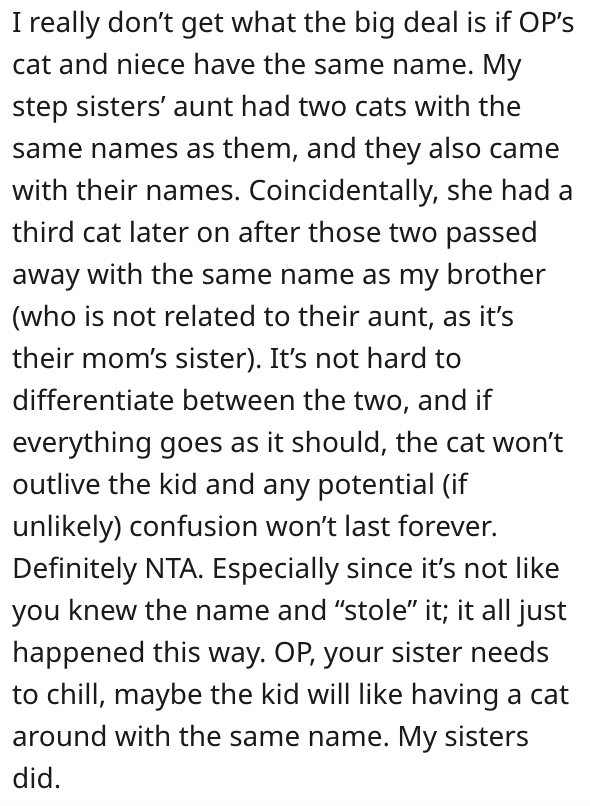 Another person said that people (or animals) all having the same name really isn’t going to affect the world or anyone’s survival. 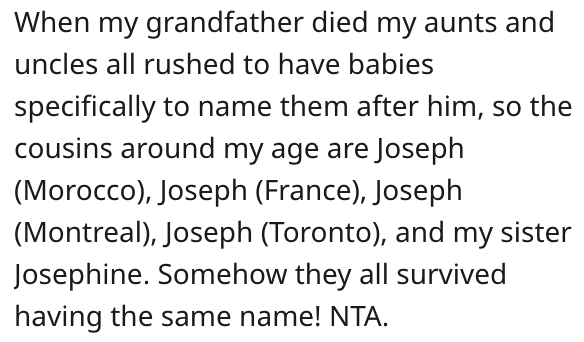 Another individual even pulled this move on themself! 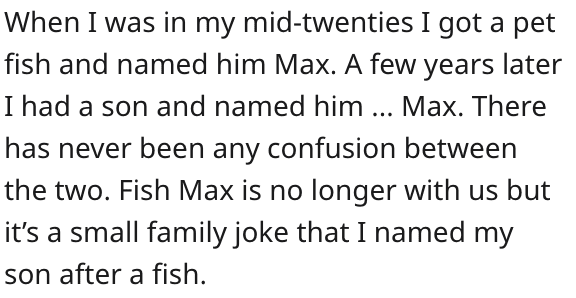 And finally, this reader made a very good point: the writer of the post had no idea what her sister was going to name her baby. 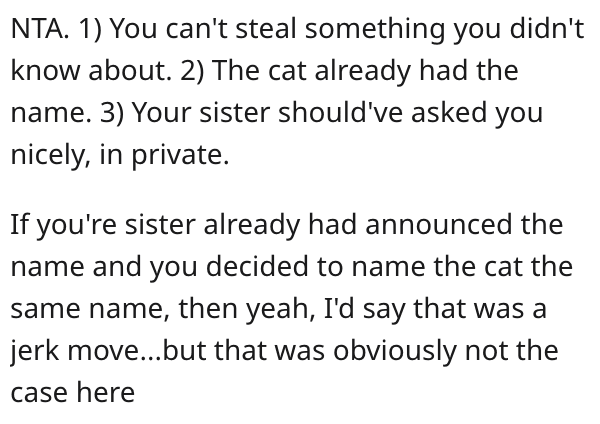 Did her sister overreact?

Or was she justified in her anger?

Tell us what you think in the comments. Please and thank you!