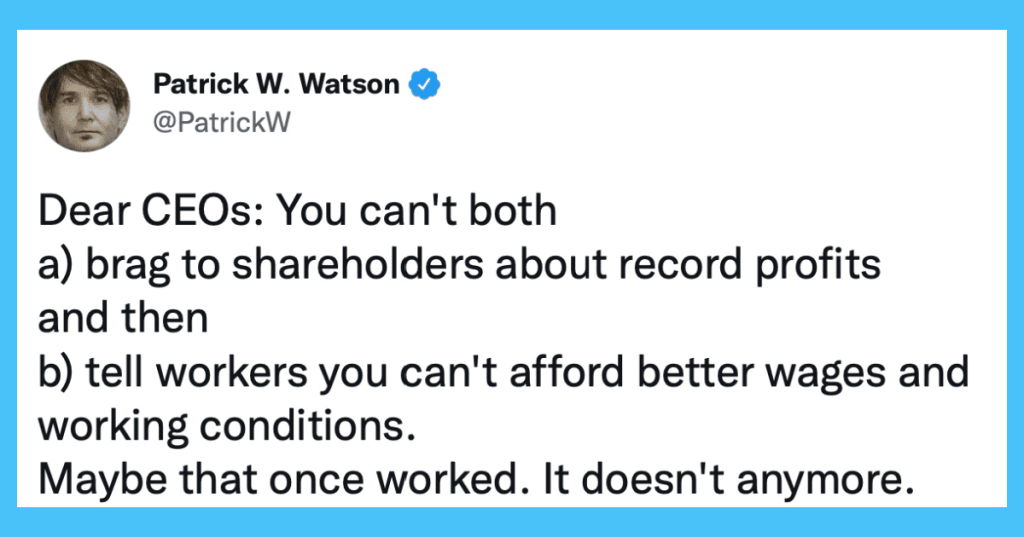 An Eye-Opening Thread About Some Truly Awful CEOs

When we’re young and in college, or maybe starting out at your very first job and learning along the way, we start to realize that the dream isn’t just finding a job we love – it’s finding someone to work for that we can really respect.

These days, people are getting pretty frustrated with the huge gulf that exists between CEOs and the rest of us, and when economics journalist Patrick W. Watson called out the hypocrisy on Twitter, it started a thread that’s pretty eye-opening.

Dear CEOs: You can't both
a) brag to shareholders about record profits
and then
b) tell workers you can't afford better wages and working conditions.
Maybe that once worked. It doesn't anymore. https://t.co/tIcNRDNkye

We’ve picked out a few of our favorite replies below!

I bet they expected them to be grateful, too.

I work on commission only and after helping bring in record profits in 2021 we got a new pay plan which included my company giving us all 20% pay cuts.

To be fair, I don’t think they need any ideas.

Have they seen this? Maybe get some ideas… pic.twitter.com/R69YlTSTkK

But also one that’s pretty telling.

A Big Reason Why John Deere Workers Went on Strike >> Its CEO saw his pay increase by 160% during the pandemic, to $15.6 million

Meanwhile, Deere is offering its unionized workers a raise of just 12% over 6 years. Its starting pay is just $20.10 an hourhttps://t.co/vUyjQcPRCa

There has to be a happy medium.

At least some people are trying to find it.

I constantly clash with minority shareholders about this issue. Of course we want to make a profit but I refuse to do it by ignoring the needs of our employees. I’m proud of the fact that employee morale has risen along with profits and that our turnover rate has plummeted.

Maybe I just think that because I don’t have money.

That’s the best part. They HAVE to brag about just how much money they’ve made, in order to “appeal to investors,” and justify giving themselves egregious raises. They will never stop embarrassing themselves this way. It’s part of the game.

When you put it that way…

It could make you even more angry, tbh.

It’s sad, I work for a small non-profit CEO decides to pay us less than mcds, (competition pays $3+ more than us ). Curiously I looked at 990 CEO makes almost 400k. That explains why they can’t pay us competitive wages. He technically makes more than a paycheck per day.

You can shout it from the rooftops.

No one is going to listen.

Insulting the INTELLIGENCE of the WORKERS that produce the GOODS that make the PROFIT for the huge Corporations is SHAMEFUL & defines along with validating the term CORPORATE GREED!

I think they’re in denial to be honest.

They hate that we’re not taking it anymore.

Things are a little too spot on sometimes, don’t you think?

What would your reply have been? Share with us in the comments!