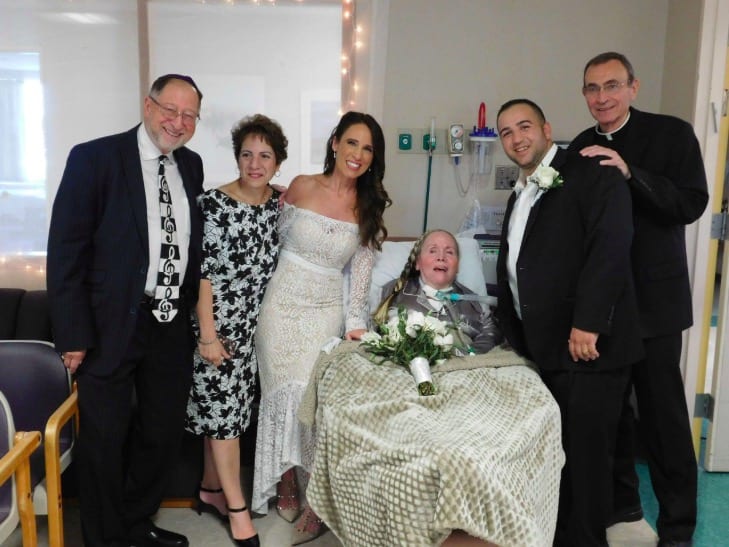 Bride Moves Wedding to Nursing Home So Mom Can Be There

New York woman Nicole Hartstein-Guida was excited to marry her fiancé, Edward Guida, after eight years of dating. But one very important person couldn’t make it to the ceremony: her mother.

Nicole’s mom, Jane Hartstein, is currently a patient at a nursing home in Long Island. She’s on a ventilator after having a stroke three years ago, so she wasn’t able to make the trip to Nicole and Edward’s wedding venue in New Jersey.

So, Nicole and Edward decided to bring the wedding to Jane. They held a special ceremony at the Gurwin Jewish Nursing & Rehabilitation Center.

The nursing home decorated the family room in the unit for the occasion, and they wheeled Jane in for the surprise. She cried tears of joy to see her daughter in her wedding dress.

“I know you wanted to be at our wedding, so we’re bringing our wedding to you,,” Nicole explained.

Nicole’s uncle escorted her down the aisle, and the couple exchanged vows in front of a priest and a rabbi. It was “amazing,” Nicole said.

“This is the best gift anyone could ever have given me,” Jane said.

Nicole and Edward still held their official ceremony in New Jersey afterward, but they made sure to include Jane in that occasion, too — they livestreamed it for her on her TV at the nursing home.

“I just want Nicole to be happy, and I want her mom to be happy, too. We knew we wanted to do this,” Edward said.