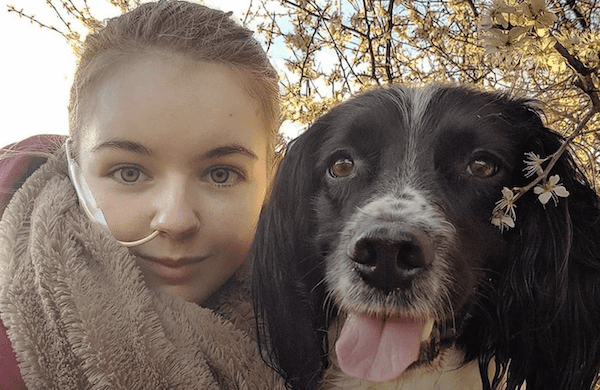 Chloe has been battling illness since she was 13 years old. She has orthostatic postural tachycardia syndrome, which is a rare syndrome affecting her heart, as well as Ehlers-Danlos which attacks her joints.

Fortunately, she also has a springer spaniel named Ted who is her best friend and helper.

Me and my main man ? Super cheesy but there's nothing I enjoy more than sitting on a field with him and watching the sun dip below the horizon. This field in particular is a haven for birds, there's so many! It's lovely listening and watching them. Ted meanwhile loves it because it backs onto a school and so there's a large amount of tennis balls to hunt out that have been thrown over. His current record is seven balls found in one evening, I'm sure he'll beat it soon enough ? We don't play fetch with balls if we can avoid it, it's not particularly good for their joints, instead I prefer to hide them in grass so he can hunt for them. He loves it!

She can’t help but gush about her adorable assistant on Instagram, writing:

Me and my main man. Super cheesy but there’s nothing I enjoy more than sitting on a field with him and watching the sun dip below the horizon. This field in particular is a haven for birds, there’s so many! It’s lovely listening and watching them. Ted meanwhile loves it because it backs onto a school and so there’s a large amount of tennis balls to hunt out that have been thrown over. His current record is seven balls found in one evening, I’m sure he’ll beat it soon enough. We don’t play fetch with balls if we can avoid it, it’s not particularly good for their joints, instead I prefer to hide them in grass so he can hunt for them. He loves it!

Today marks two weeks of being in hospital as an inpatient with Ted by my side the whole way. I'm sorry it's taken so long to post about it, as you'd expect I'm quite poorly and finding the admission exhausting. This is both my own and Teds first admission so it has been a learning curve for both of us! He's being perfect, I couldn't ask for better. You may feel that it's unfair to keep a dog in hospital, but there are many surprising benefits. The first being Ted is a working dog, he loves his job. Ted would hate being at home, even with dog walkers he would far prefer to be with me working. Another benefit is with regards to nurses, the ward I'm on is sadly quite short staffed and help can take a while. Teds help means I often have nurses coming in asking if I'm ok, that I'm quite quiet, don't I need anything? Nope! With Teds help I am able to be almost entirely independent. This also relieves my mum from some of her worries about leaving me. Furthermore when in hospital, it can be hard to maintain motivation and a upbeat attitude, but when you have to take care of a dog, it provides a focus, a distraction and a way to break the day up. Not to mention a positive discussion point with any staff! I firmly believe there are countless benefits animals provide to patients.

Ted came into Chloe’s like when he was five months old. Since their first day together, when he was too fearful of her wheelchair to even approach her, Chloe has trained Ted using hand motions.

Yesterday was my 21st birthday, I couldn't miss out on a photo with my best mate could I ?

Now, he helps her with everything, including bringing her shoes and other things, and taking off her socks.

Those big, brown eyes, though.

During the last 24 hours we've had a pretty massive influx of new friends on both Facebook and Instagram, so we just wanted to make a post to say hi! We've received thousands of lovely messages, I've shared virtual pats and kisses with Ted all the way. It's probably going to take us a couple of days to get through everything so if you're waiting for a reply, don't worry, I'll get to you ? In the coming weeks we'll be sharing more about Ted, myself (Chloé), what we do for fun, how Ted helps me, why I need his help, ect. If there's anything you want to know specifically, feel free to drop us a message and we'll address it! Thank you so much for joining us, we can't wait to show you more of our adventures ❤️

Not only does he fetch the items she needs to get through her day, but he also brings her comfort, especially when she must endure medical treatment.

A year ago yesterday I went into a hospital appointment and was told I would be admitted for tube feeding. The first thing I said was "Ted will be coming with me, that's ok right?" I was in such shock, but even still, the very first thing on my mind was Ted. I couldn't really comprehend what I was being told, but I knew that with Ted by my side, I could handle anything. My consultant said to expect to be in for a few weeks, 12 weeks later we were finally discharged. I firmly believe that having Ted by my side changed my entire mindset, I wasn't able to wallow in misery, it was time to take Ted out. I still can't commend the hospital enough for how amazing they were regarding Ted. But also, all of you. The support we received over those 12 weeks was phenomenal and truly helped so much. What could have been something absolutely awful was made bearable with the best support system I could have asked for. Without Ted, and by default everyone here, I don't know how I'd have done it.

Now Chloe works with the non-profit Dog Assistance In Disability (Dog AID), helping others train their own dogs to assist them because of their limited mobility. When you have a dog’s love and devotion, you can face any challenges.

4 years ago today we went into our final assessment with @dogaidpics and passed, making Ted a fully qualified Assistance Dog. The following 4 years have been the most fantastic whirlwind, I'm incredibly excited to see what the next 4 bring. I hope I've made you even a quarter of how happy you've made me, my little legend ❤️❤️

Ted, you’re a good boy and a great help.

What do you think of Ted? Tell us in the comments!