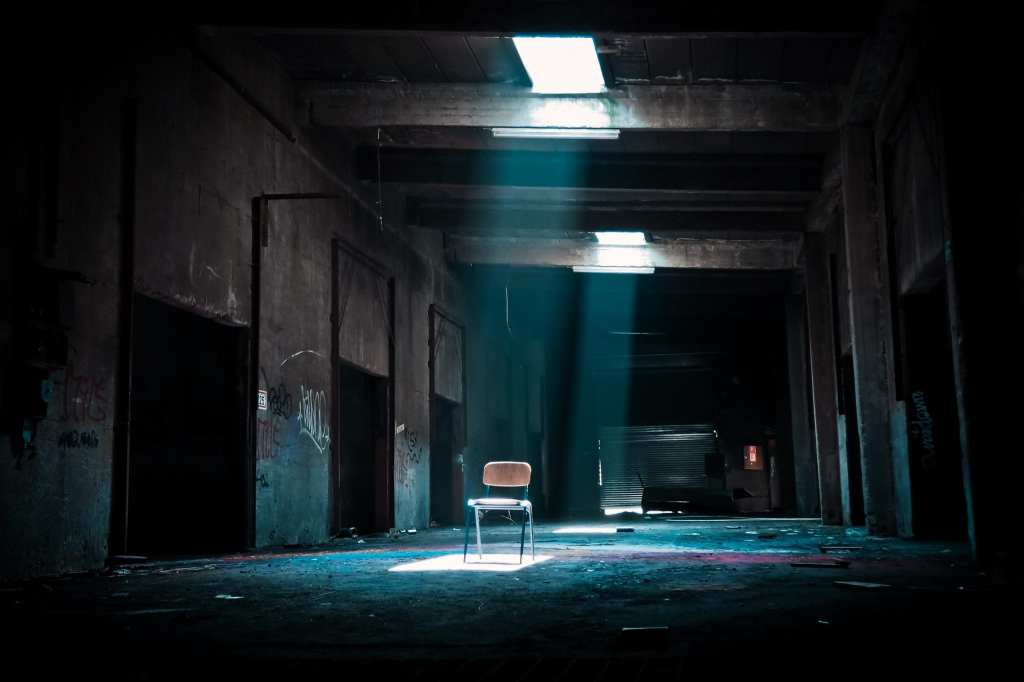 Girlfriend Flips Out When She Learns About Boyfriend’s Secret Room

We’ve probably all dreamed about having hidden compartments and secret rooms in our homes, the kind you can only reach by pushing on one particular spot in a bookcase or by tilting a light fixture to just the right angle.

That dream was actually a reality for one man, who renovated an apartment to include a secret room. Not long after that, however, he soon found himself in hot water when his girlfriend learned about his “secret room” after they moved in together. She was furious with him for keeping the room secret from her and she felt like he violated his trust.

Now he wants to know: is he the asshole for keeping the room secret?

Read the full saga below:

AITA for not telling my fiancée about a secret room in our apartment?

I recognize the title sounds a little ridiculous. The situation is less so.

I was very fortunate to be in a position to buy an apartment straight out of college. It’s a weird unit on a high floor of a weird building, but I’ve gut-renovated it and made it really nice.

One aspect of my home was created just to fulfill a childhood fantasy. A secret room! It’s simple— a flush mount bookcase put in the doorway. It leads to what would otherwise be a windowless very large closet or a very small room.

I made it into a cute secret lair / reading nook, but with no windows… it never got used. Ended up being more long-term storage.

I never told anyone about it… because it was a secret room!

I kind of figured at one point I’d tell my girlfriend, Emma, but I didn’t want to tell her until I had a reason to. (I had finished it shortly before meeting her.)

I figured maybe one day if we had a kid, I could remove the bookcase and bam, we’d have plenty of space to put in a changing table setup. Or a craft-nook for her.

But I largely forgot about it, except when I needed to pull something out from back there… which is rare.

Emma, now my fiancée, has been living with me in my (now our!) apartment for eight months.

During this time, I’ve kept the secret room… a secret.

It’s not like I was thinking about it all the time. I only consciously did something sneaky maybe three times since she’s moved in, to get Christmas lights, a spare coffee maker, and to put away a novelty item she probably thought I threw out.

And the reason I was sneaky at those times was because again, I didn’t want to waste the surprise on Christmas lights!

We’ve both been working from home lately, and we aren’t really able to leave very often, due to circumstances… And she jokingly announced we needed a new room to shake things up from her normal commute. (Bedroom to Living Room.)

So of course I excitedly pulled open our “built-in” bookshelf and showed her our room!

…And she flipped out.

She is furious at me. She sees me keeping this secret as a major betrayal of trust, given that this is her home. She’s acting like I cheated on her. I tried to explain I was waiting for a special moment, but… she thinks that makes it worse.

I have no idea if she’s being unreasonable or if I am.

Reddit decided he was likely not the asshole, but he really didn’t take into account his fiance’s feelings at all, either.

But from the big-picture perspective, comparing it to another woman seems a bit … much: 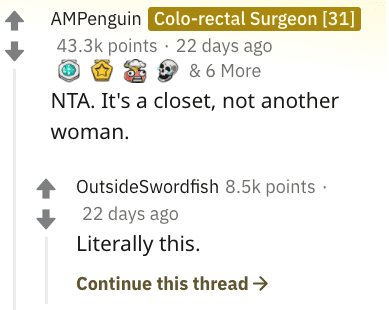 Other people chalked up her overreaction to cabin fever: 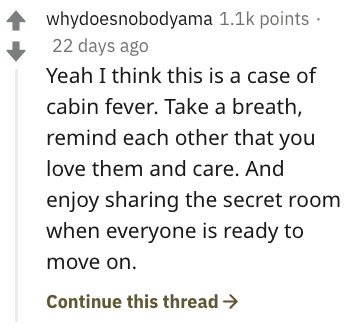 Some people wondered if her behavior now was a symptom of some larger problem: 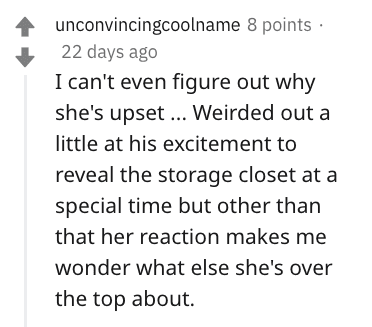 While others said they would’ve been thrilled to learn they had a secret room in their new home: 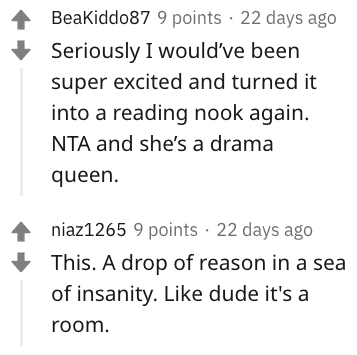 Still, some people thought it was a bit creepy and weird. Like why was he waiting to surprise her with a secret room anyway? 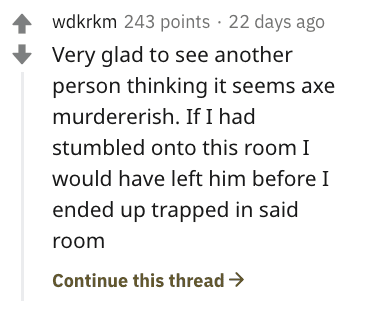 Moving in together can be tough, no doubt, but this situation just seems downright bizarre. Sure, you’re not an asshole, but why are you hiding stuff from your fiance and why do you have a hidden room that’s so sacred to you?

Do you think this guy was the asshole? Or was his fiance overreacting? Some mix of both?