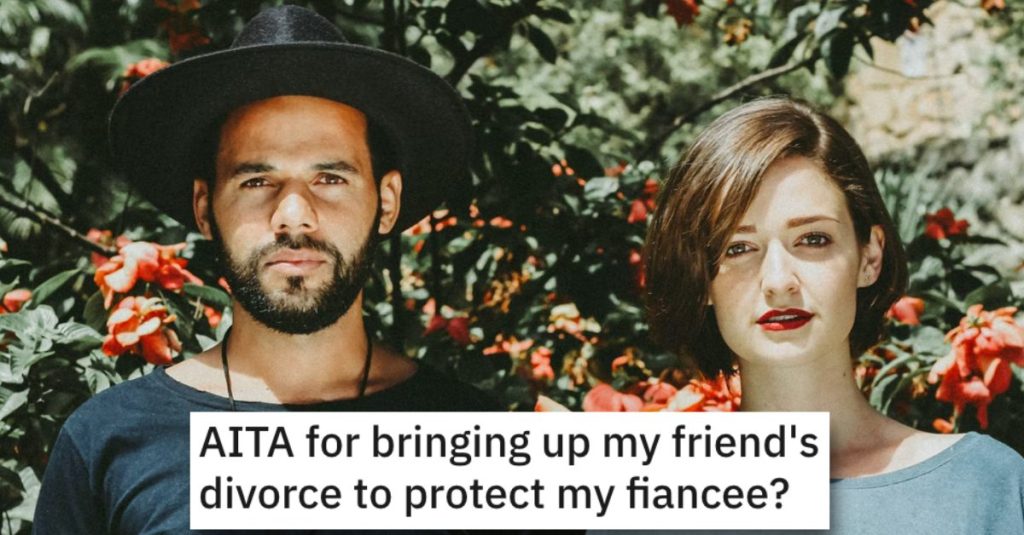 He Brought up His Friend’s Divorce to Try to Protect His Fiance. Was He Wrong?

But that’s what you get sometimes with stories from Reddit’s “Am I the A**hole?” page.

Let’s take a look at this story and see if this guy was out of line for what he said to a friend.

AITA for bringing up my friend’s divorce to protect my fiance?

“I (m28) have a friend group back from high school, that I don’t really hang out with but we’re still in touch. We haven’t seen each other in a while, so we decided to meet up.

We all agreed that we would bring our partners, if we have one, so that our wives/husbands/girlfriends/boyfriends could also meet each other. I brought my fiancee with me, she was very happy to meet my friends and hear about stories from my teenage years.

My friend group from high school consist of mostly men, but there are also two women that we were close with. One of them was my high school crush, let’s call her Sarah. Sarah rejected me when I confessed to her.

She bragged about it to everyone & made fun of me, but because she was friends with my friends I just dealt with her. I quickly realized that it was just a stupid, passing crush – the moment she became mean to me was the moment I realized, that I don’t even find her pretty anymore because of her personality. You might say I was young and stupid.

When Sarah met my fiance she decided it would be a great idea to be a complete b**ch to her. She went from bringing up my crush on her, to saying that my fiance is an obvious downgrade from her – she isn’t, my fiancee is absolutely gorgeous and natural, unlike Sarah.

I told Sarah that she should really think about what she’s saying, because being almost 30 there is no excuse for being so d**n stupid. She started deflecting, the topic of me having crush on her in high school came up again so I said, that she should stop bringing up things from a time when I was young, stupid and obviously BLIND.

Sarah became visibly angry, I guess she never really grew up from our time in high school, because she was still going at me and my fiancee, saying that I have to watch what I say (lmao), because I might come crawling back to her. I replied by bringing up the fact that she’s currently going through a divorce & she might want to sit back and think about why is that.

She left to go to the toilet, came back after few minutes, grabbed her purse and left. The rest of my friends were divided on my reaction – some thought I did the right thing and was only defending my fiance, some thought that bringing up Sarah’s divorce was a blow below the belt. The more I think about it the more conflicted I am, my fiancee agrees that I was kind of harsh, but she’s also very grateful for standing up for her.

Am I the a**hole for bringing up my friend’s divorce to protect my fiance?”

This person said he’s NTA and he did the right thing. 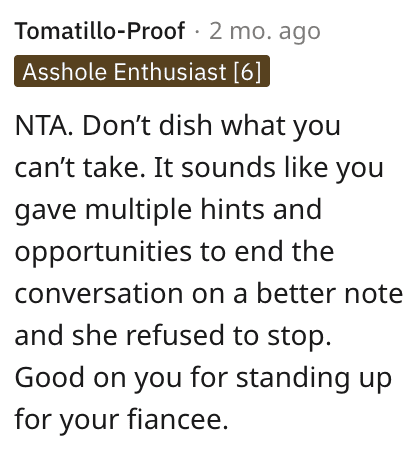 And this individual agreed and said this kind of thing seems to happen all the time. 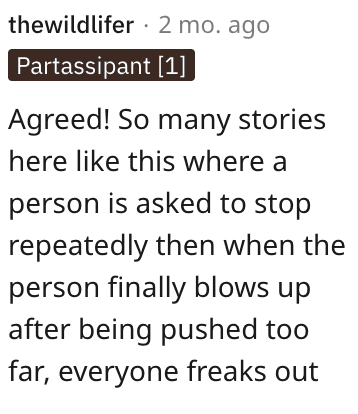 And this Reddit user said Sarah deserved this and she should be ashamed of herself. 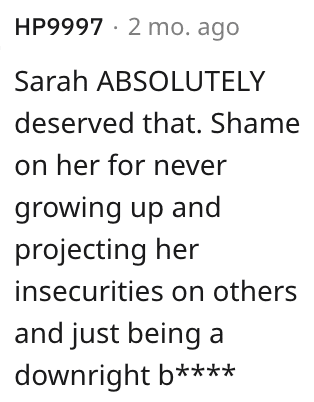