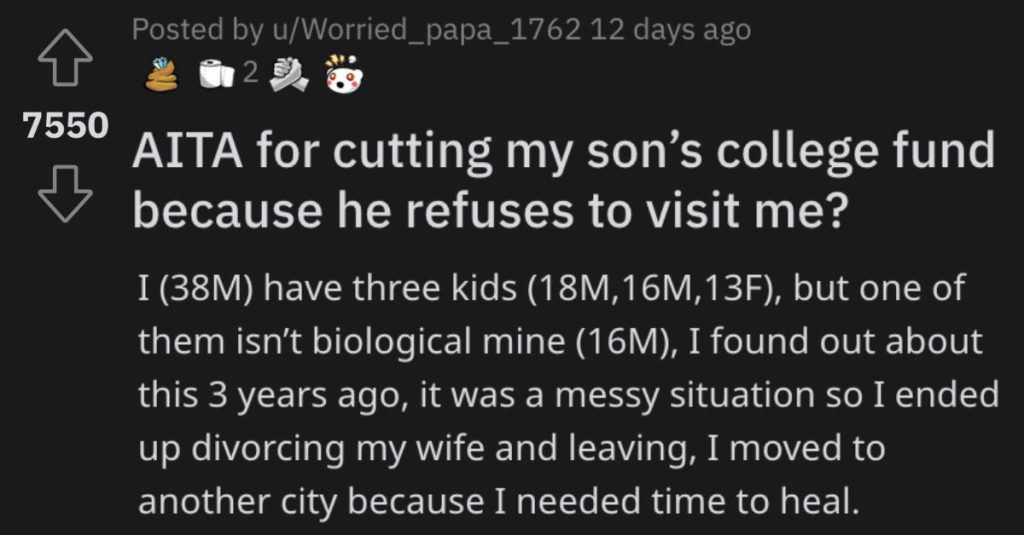 He Cut His Son’s College Fund Because He Won’t Visit Him. Is He Wrong?

It seems like every time I turn around I’m hearing stories about people who are cutting off someone’s college fund because they got offended by something they did.

And here’s one more for the record!

Let’s see what happened in this case…

AITA for cutting my son’s college fund because he refuses to visit me?

“I (38M) have three kids (18M,16M,13F), but one of them isn’t biological mine (16M), I found out about this 3 years ago, it was a messy situation so I ended up divorcing my wife and leaving, I moved to another city because I needed time to heal.

I wasn’t physically involved in my kid’s life for two years but I called them every day and talked to them, I also paid child support for the three of them, here is where I know I did a terrible thing and maybe that’s why Alexander is mad at me and doesn’t want to see me.

When I called my kids, I only called Sophia and Raphael (13F, 18M) because I felt uncomfortable talking to Alexander, one day he was angry and grabbed the phone crying and said: “Don’t you love me, dad, why are they more important to you?”

I politely replied and said “Honey, look I love you but I need some time to heal, I’m still your father and I’ll be back soon” (He knows I’m not his biological father)

I talked to him thru messages because I didn’t feel completely comfortable doing a facetime, I moved back to my city last year with my new partner to settle down, and my kids (13F and 18M) came to visit me immediately but Alexander didn’t come so I went to his mom to see what was going on and I talked to him and also apologised for treating him that way but refused to come to my house and said that he only wanted to hang out with me and we did that.

When he found out my wife (he refused to come to my wedding) was pregnant he told me not to visit him again, then I found that his mom was seeing Alexander’s biological father so I thought that my son wanted a relationship with his bio dad instead so even if it hurts I respected his wishes until I found out that he rejects this guy, Raphael says that one day this guy was trying to spend time with him but Alexander said: “Look dude, no hard feelings but don’t try to force a fatherly role on me because you are not my dad and I already have one” So I decided to invite him again to live with me because my other two kids live with me 80% the time and he is the only one who refuses.

My daughter was born 6 days ago and he hasn’t come to see his half-sister so I called him and said that if he doesn’t come to see me I’ll be cutting his college fund, he told me to f**k off and then hung up.

My mom says I’m being an AH for threatening him that way.

AITA? Seriously I don’t see the point of paying a college fund for a child that doesn’t even want to see me.”

This made said this guy is nothing but a selfish a**hole. 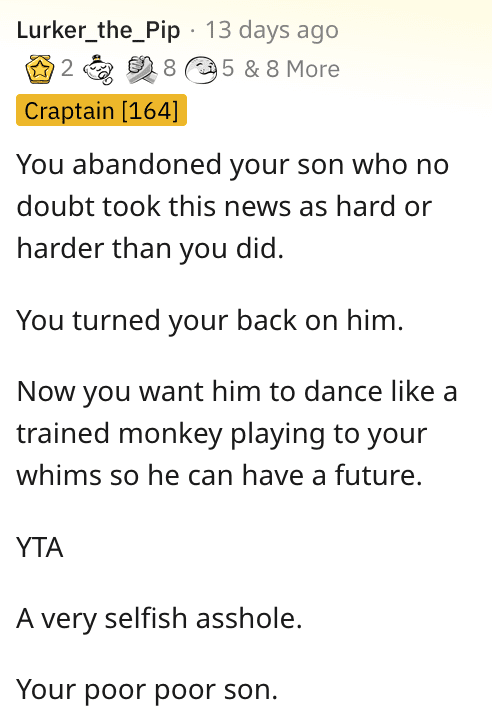 Another individual agreed and said he’s using his money to try to manipulate his son. 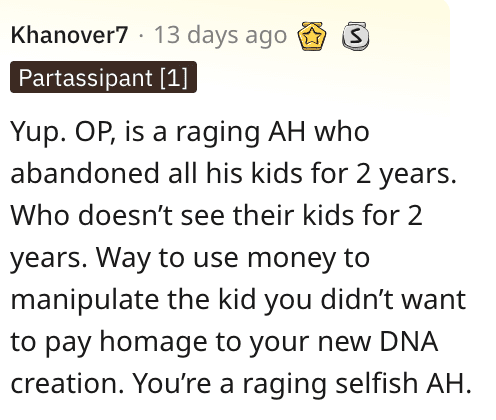 And this Reddit user had some strong thoughts about this situation, as well. 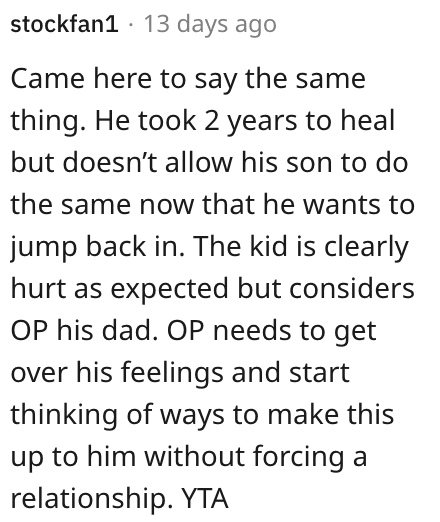