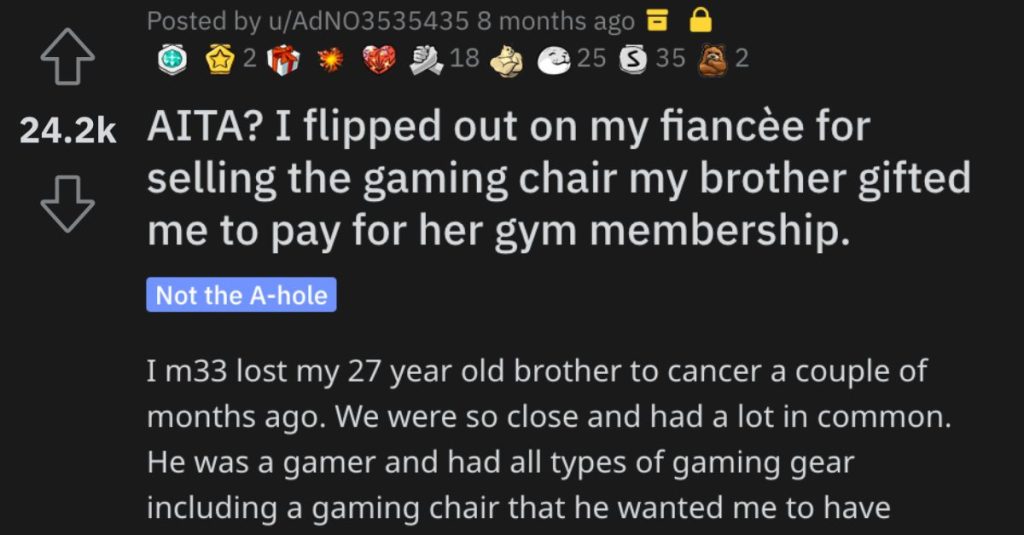 He Got Mad at His Fiancèe Because She Sold a Gift He Received From His Late Brother. Was He Wrong?

Do you want some solid life advice: don’t sell things that aren’t yours!

Even if those things happen to belong to your spouse…trust me on this one.

And while you let that sink in, see if you think this guy overreacted when he flipped out on his fiancée.

AITA? I flipped out on my fiancèe for selling the gaming chair my brother gifted me to pay for her gym membership.

“I m33 lost my 27 year old brother to cancer a couple of months ago. We were so close and had a lot in common.

He was a gamer and had all types of gaming gear including a gaming chair that he wanted me to have before he died. It’s devastating because we were really hoping and had plans to spend Christmas 2021 together. This chair I consider special because it was my brother’s favorite of all gear and it remindes me of him whenever I sit in it (I don’t play anymore) It just brings me closer to him to a degree I can not explain and it brings me so much comfort.

I keep the chair in my office and days ago I found out that my fiancee who has been out of job and complaining about no longer being able to attend the gym took the chair and sold it online to be able to pay for her next month’s gym membership. When I found out I flipped out hugely and had a very negative reaction. She told me that she was desperate for money and after selling all she had she had no choice but to sell the chair.

I reminded her of who this chair belongs to but she said I already have tons of keepsakes from my brother and so I shouldn’t act like it was the end of the world. She also vented about her past eating disorders and her anxiety when it comes to keeping fit and claimed I was dismissing that she is struggling. I yelled at her and called her inconsiderate and selfish and told her she should have never ever took and sold any of my stuff for a gym membership when she literally could-ve kept working out from home.

She started crying as we argued then she went to stay with her mom who tried to give me a stern talk about my attitude and but I didn’t answer that and haven’t been talking to my fiancee since then. Things haven’t got better and I got called overdramatic for reacting and treating my fiancee like that over a gaming chair. I feel guilty because I’ve never yelled at her in my life before. 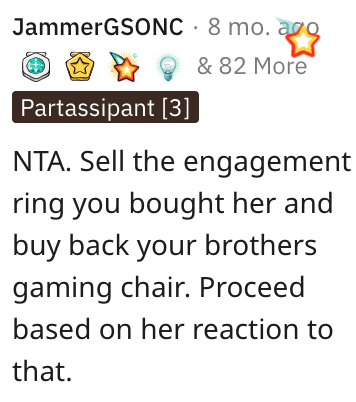 This reader said what the woman did is definitely NOT OKAY.