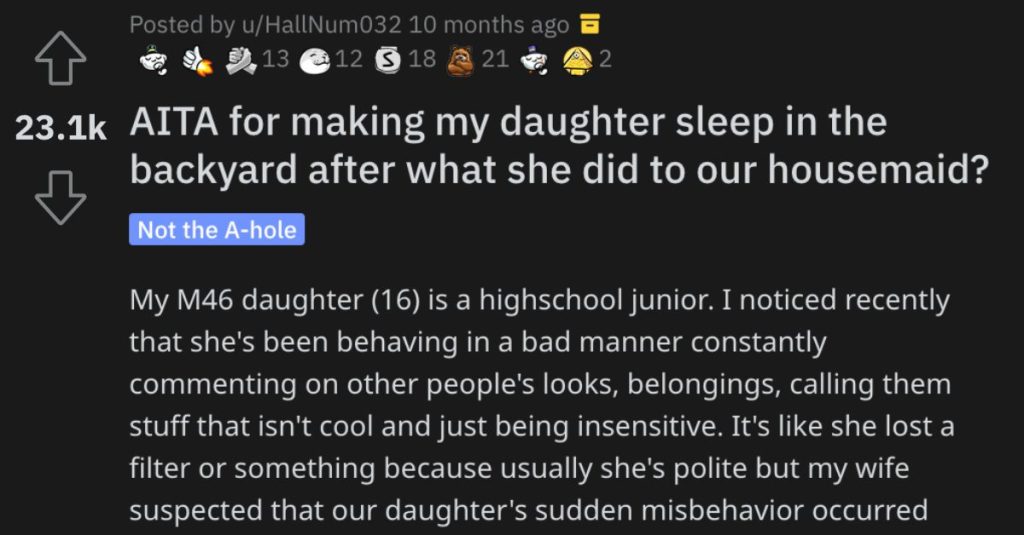 He Made His Daughter Sleep in the Backyard as Punishment. Did He Go Too Far?

I got punished quite a bit as a kid, but my folks never made me sleep in the backyard…that’s a new one!

AITA for making my daughter sleep in the backyard after what she did to our housemaid?

“My M46 daughter (16) is a high school junior. I noticed recently that she’s been behaving in a bad manner constantly commenting on other people’s looks, belongings, calling them stuff that isn’t cool and just being insensitive.

It’s like she lost a filter or something because usually she’s polite but my wife suspected that our daughter’s sudden misbehavior occurred after she started hanging out with new girls from the school. Basically the mean type and have picked on their behavior. I’ve sat with my daughter and had many discussions about how her behavior has been negatively affecting everyone around her.

Our housemaid is the person most affected here and my daughter has chosen her to be her target for hair, clothes, “etiquette” criticism. She has complained about our daughter calling her offensive names like filthy and gross for cleaning certain areas in our house. I took a stand and explicitly told my daughter I’d punish her if she ever said stuff like that to our housemaid again.

Days later my daughter came to me saying she couldn’t find her iPhone after looking everywhere. She asked me to call her number and I did. My wife and I were stunned to discover that the iphone was ringing inside our housemaid’s bag. I had an confrontation with her immediately and she denied and cried saying she never touched the phone nor had any idea how it got there. I noticed my daughter calling her theif repeatedly so I told her to stop and go to her room.

I checked the indoor camera before continuing the argument and saw my daughter place her iphone inside our housemaid’s bag, I was livid. I apologized to the housemaid and gave her the rest of the day off. I then showed the video to my daughter and she was absolutely speechless. I said what she did was immoral and straight up offensive to tamper with that poor woman’s livelihood over a petty party she couldn’t go to.

I told her she was grounded and will have to spend the night in the backyard (she is a germaphobe) but she cried begging me to not make her sleep with the dirt, insects and hot temp. I refused to discuss it or I’d make it 2 nights. My wife said I should go easy on her but I said calling people filthy and accusing them of stealing wasn’t ok in fact it was the absolute worst, I then went through with my punishment.

The reason I chose this punishment was because of the fact that my daughter says she is a germaphobe and use this as excuse to insult others hygiene and appearance, our backyard has dirt and bugs in it and this kind of things get her uncomfortable but other than that the backyard is 100% safe.”

This person this guy is NTA and he should make his daughter do the maid’s work for a week. 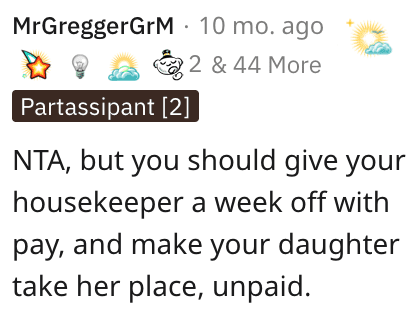 And this individual had some thoughts about what he should do to get his daughter in line. 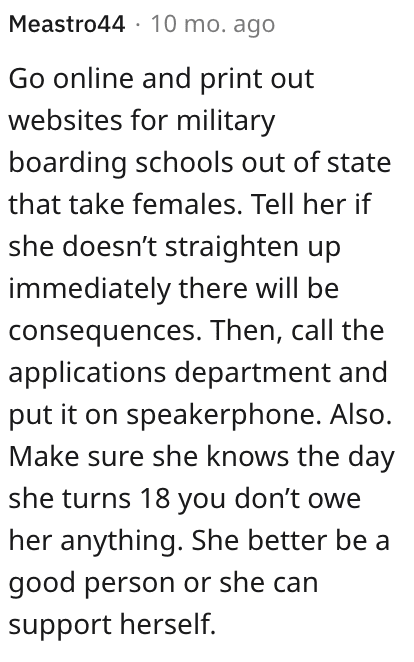 Another reader said his daughter actually belongs in jail. 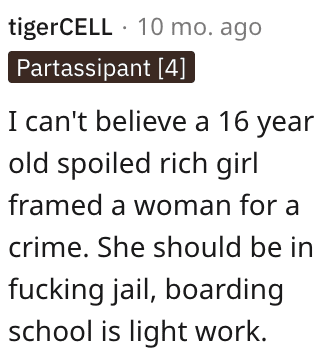