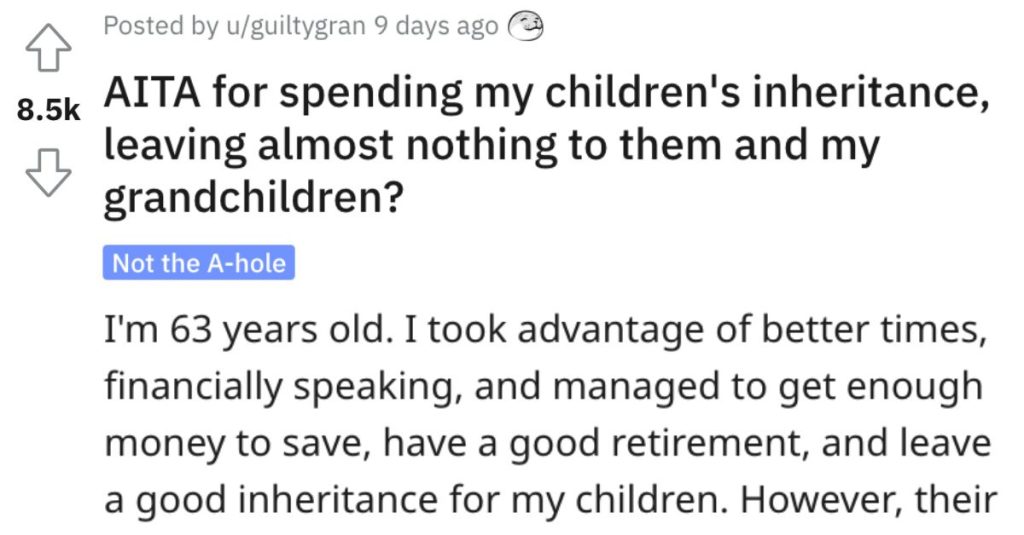 He Spent His Children’s Inheritance. Was He Wrong?

Or, maybe it’s LESS money, mo’ problems, depending on how you look at the situation…

But whatever the case, we’re gathered here today to read a story from Reddit’s “Am I the A**hole?” page and to determine if this guy acted like a jerk for spending his children’s inheritance.

AITA for spending my children’s inheritance, leaving almost nothing to them and my grandchildren?

“What you are about to read, is a recent cause of emotional distress for me, regret, and I’m doing this post with the help of my colleague and his son, whom insist I’m doing the right thing.

I’m 63 years old. I took advantage of better times, financially speaking, and managed to get enough money to save, have a good retirement, and leave a good inheritance for my children. However, their actions in recent years has broken my heart.

My oldest daughter is a lawyer, married to an attorney. I have another son who is also a lawyer, a third who became an engineer, and the youngest, who is a salesman.

I have been a **oker for many years, and, the predictable outcome has finally caught me, so I may not have many years left. After knowing this, my children began stabbing each other’s backs, trying to get their inheritance earlier. Initially were frequent verbal discussions, that escalated to legal battles.

The boiling point came when my daughter forged her brothers’ signature to take their part of the inheritance while I was being treated at the hospital. Now, none of the siblings can see each other in the eye, and only talk through lawyers.

Saddened by this situation, decided to spend the money, thinking that if all of it is gone, they would have no more reasons to fight. I donated to charities, bought my wife beauty items, went on vacations with her paying for the better looking hotel rooms (no planes because of covid travel restrictions), gave my grandkids expensive gifts, bought my dearests friends and colleagues better equipments to improve their work. We bought a huge TV, prepaid for my funeral, tasted some fine whiskey, among other things.

Right now, about 65-70 percent of my saving are now gone. I plan to keep enough for the time I have left, and leave my wife a good cash amount.

However, my children are noticing that I’m spending a lot, and started to ask questions. My daughter figured out what happened on her own. I had no rebuttals, since I’m guilty of all the accusations she made, but then she mentioned that her children will suffer because of my selfish acts, not only that, but I am cursing all of her grandchildren by doing this.

That made me think, that my grandchildren shouldn’t be punished for their parents’ sins, and maybe, I was too self-absorbed to realize it sooner. That’s my dilemma now.”

One reader said he’s NTA and that he can do whatever he wants with his own money. 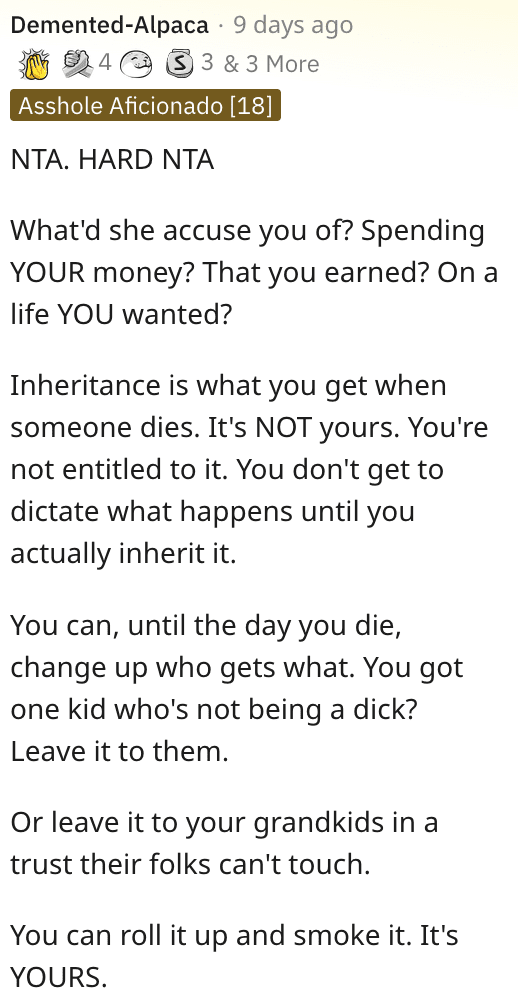 And this Reddit user agreed and said he doesn’t need to have any further conversations with his kids. 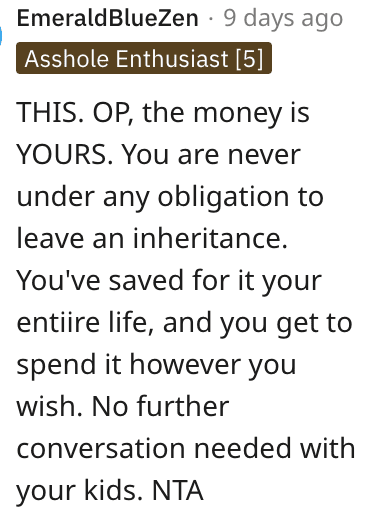 Another individual said he’s NTA and that his kids have good careers and shouldn’t be counting on money from him. 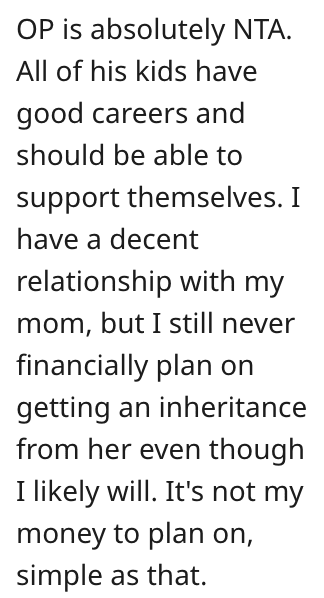