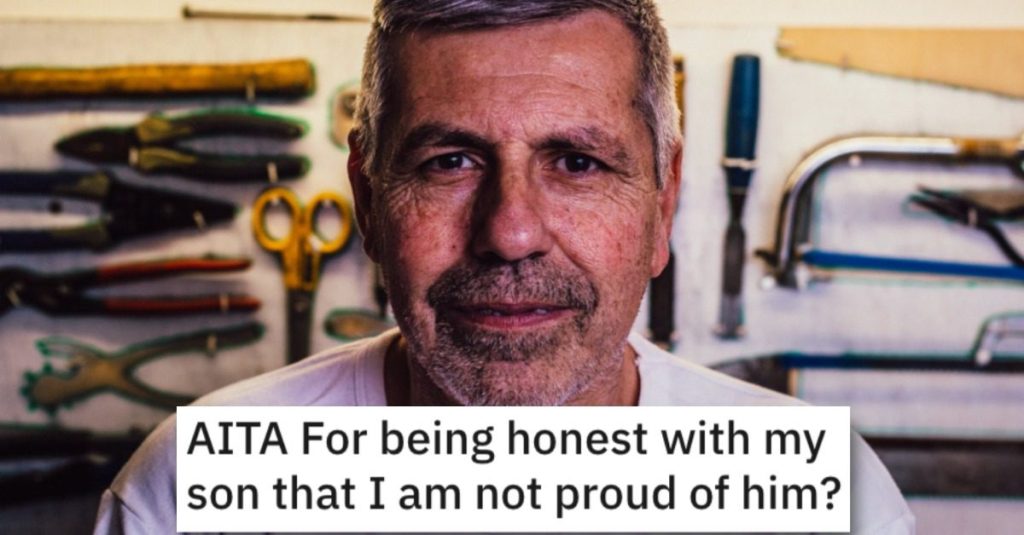 He Told His Son He’s Not Proud of Him. Did He Go Too Far?

Have you ever had one of your parents tell you that they’re NOT proud of you?

I definitely have not, but I can imagine that it’s gotta hurt and cut pretty deep.

Take a look at this story and see if you think this father acted like an a**hole when he told his son he isn’t proud of him.

AITA For being honest with my son that I am not proud of him?

“My wife, Nina, and I became pregnant with our son, Jason, when we were both twenty.

We will admit it was an unplanned pregnancy, but we loved our son and kept him. We did our best to raise Jason to be kind, respectful, and treat others well, and we thought we succeeded. Jason worked hard to attend an elite university. Jason and his first wife, Sara, had a daughter, Simone.

Unfortunately, Sara passed in a car accident before Simone’s third birthday. Jason raised Simone until Simone was four. At that time, he met his second wife and moved two hours away. Simone lives with us. Jason visits once every two months at best. He and his wife would stay for the day, buy Simone a present, then Jason would say it was time to leave. Nina and I suspect he only visits and buys Simone the present because his wife makes him.

His wife, Iris is a lovely lady; She insists that Simone should move in with them or they should move closer to us because she wants to be Simone’s stepmom and spend time with her. But Jason shots the idea down because he says Simone moving in or them moving would hurt his career and it is best Simone stay with Nina and me.

Simone is eleven now, and she adores Jason. She makes drawings and cards for him, constantly bakes treats to send to him. It is devastating for her, because her daddy is her hero, and he does not want to spend time with her.

Her birthday was in July and she cried when Jason did not call her to wish her a happy birthday. Iris tried lying to Simone to make her feel better that the phone lines went down and Jason did not forget, but Simone did not believe her.

Simone is at summer camp all this week, and Jason invited us to a party to celebrate receiving a promotion. During the party, Jason told me about how much more money he makes with this promotion and his job title and he asked “You should be proud, old man. (Job Title) and an (elite university) alumni.”

I sighed and told Jason that I honestly have not been proud of him as of late. He may have a well-paying job, but he treats his own beautiful daughter as if she doesn’t matter. Simone is his own little girl.

She loves him so much, and he doesn’t even seem to care. Nina came back with drinks and Jason told her what I said. Nina told him that she agreed with me and he does not treat Simone right.

Most of the family says that I and Nina were in the wrong to tell Jason I was not proud of him. They said I should know how much that statement hurts at any age because I was never good enough in my own father’s eyes.

They said that Jason is probably focusing on stabilizing his career and Simone can move in with them after. They also said Jason’s own promotional party was not the time or place to call him out and I could have just congratulated Jason on working hard and saved the drama for another day. I feel what I said needed to be said. But most of the family is disagreeing with Nina and me.

One person said all this guy did was tell his son the truth. 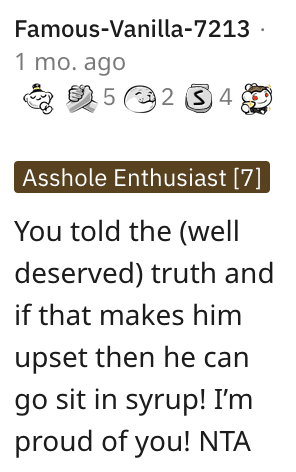 And this individual said he’s NTA and that his son has no integrity. 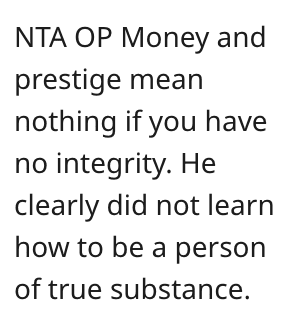 Another Reddit user said his son is a bad father and his dad just gave him a kick in the a**.