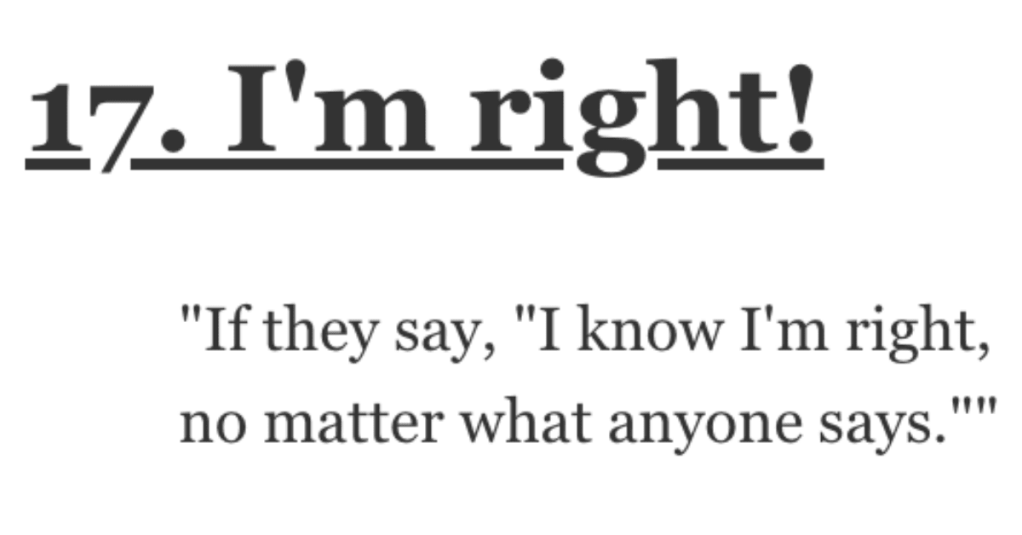 How Can You Tell Someone Doesn’t Have Common Sense Without Speaking to Them? Here’s What People Said.

Actions speak louder than words, and when it comes to how smart a person is, the saying sometimes applies.

I say sometimes, because for some reason the stereotype exists of a quiet person being dumb when most of the time I think it’s probably the opposite.

That said, there are plenty of ways people think they can tell if a person is not quite bright, and none of them require any conversation at all.

1. It just saves the rest of us some time.

Having a shirt that says “I’m stupid” so you don’t have to say it.

Putting politicians on a pedestal.

3. Let your car do the talking.

Reving your car when you’re mad.

not accepting anyone disagreeing with you ever.

shows you aren’t willing to learn, and want to stay stupid which is stupid.

Screaming at the customer service agent because the thing you ordered the week before Christmas won’t arrive on time.

Screaming at the customer service agent because you can’t get a seat when you show up unannounced at a restaurant on Valentines Day/Mother’s Day.

Screaming at the customer service agent when your card declines because you’ve got no money in your account.

Screaming at the customer service agent.

For all intensive purposes

(Looking at cars on ebay) break/brake mixed up

These people are some of the worst. They have no ability to comprehend things outside of how they see things.

If they say, “I know I’m right, no matter what anyone says.”

Omg my sister at every restaurant “do you have brown rice? No? I’ll just have water.”

“I got a yoga teaching certificate. I’m a yogi. I’m a spiritual being.”

My sisters best friend, “I am an empath! I feel more deeply than normal people.”

I ran into a glass wall once…

Trusting your life with some horoscope.

I think astrology is ridiculous, but I’m a Libra and that’s so typical for us.

“I don’t need to listen to you, I’m the parent and you’re the child”

Walking around with a mask on but the nose hanging out. It’s a chin diaper!

Usually being the loudest person in the room.

Arguing with someone who is knowledgeable in the topic you’re discussing just to save your pride.

You’re the recipient (usually posthumously) of a Darwin Award.

Those are hard to get, too, you really have to work for them.

Not vaccinating your kids.

Absolutely, and protesting about vaccines in you underwear like some Melbourne residents did over the weekend.

Loading your groceries in your car then abandoning the cart in the middle of the next parking spot instead of putting it back.

The shopping cart is the ultimate litmus test for whether a person is capable of self-governing.

A person who is unable to do this is no better than an animal, an absolute savage who can only be made to do what is right by threatening them with a law and the force that stands behind it.

The shopping cart is what determines whether a person is a good or bad member of society.

19. Remarkable is one word for it.

I was at the grocery store yesterday, and a woman pulled down her mask to ask the stocker, who was standing right next to her, a question.

I don’t really care about your thoughts on masks, but to wear one EXCEPT when you’re 1 ft away from strangers and talking with them is remarkable.

20. Fifty bumper stickers at all.

21. There’s being skeptical. Then there’s…this.

Not accepting any source as at least somewhat trustworthy and just going with the middleground of what you’ve heard.

“I don’t know about the safety of Medicine X”

“It’s really safe, the claims about certain side effects are bogus. Here is a gov. funded Study without conflict of interest and with over 10000 participants and not a single person had that side effect”

“Yea, but I mean if people are disagreeing with that they’ve got to have a reason though, so I am not so sure.”

Being sceptical about sources is fine and well, but it doesn’t mean that you can’t trust anything and always have to sit on the fence.

22. I wonder if he’s counting the cents.

There’s this guy from high school that goes around facebook saying “I make six figures” without supporting his statements beyond that, like him making six figures supports any argument he makes.

I’m not stupid, your!

Arguing about company policy with a worker who is at the very bottom and can not do a single thing about it.

26. A blessing in disguise.

A friend who works in call centres says that folk saying “I’m taking you to court!” is a great outcome because she no longer has to deal with their bullsh%t.

“Okay, if you feel that’s the right course of action you should do that. I can no longer talk to you. Our legal team’s contact details are on the website and you should instruct your solicitor to contact us through them. Have a blessed day!”

27. They just can’t believe they could be wrong.

Piggy backing on this. Customers who say “You guys always move the items in the shop around, it’s no wonder I can’t find anything”.

No mam, it’s in Aisle 8, halfway up, righthand side, eye level, just like it always has been for years…

“Yeah no worries, that’s over in Aisle 8 about halfway up on the righthand side at eye level”

“Well it wasn’t there last week when I came in to do my shopping! It was in Aisle 7!”

Honking continuously when stuck in a traffic jam.

Nobody has ever said anything insightful then followed it with hmmm…

This, and inching forward every other second at a red light.

“Europe is a country”

“The UK is a continent”

“The UK is no longer part of Europe”

There are more but those are 3 I can think about.

32. Those things are ridiculous.

Wearing those extremely elaborate and specific t-shirts that say things like “Don’t mess with me, because I’m a 42-year-old wife to a mechanic who loves guns, eats steak, and isn’t afraid to tell you your breath stinks on a friday afternoon.

I only learned Elon musk was a “real person” two days ago.

I thought he was from Star Trek.

Screaming at retail workers when they’ve already told you they can’t do something.

Like they’re magically going to be able to do what you want all of a sudden just cos you’re screaming at them.

Those shirts that advertise bad attitude……

Having to look in the fridge every time you lose your phone because you’ve left it there three times before.

Imagine being above the age of 13 and thinking that it would be cool to wear that.

I’ve seen two grown men wearing those shirts at the grocery store. Hope they don’t hurt themselves with all that edge!

Believing any FaceBook “mom posts” that start with: “This is the secret doctors don’t want you to know about!”

Standing for 10 minutes in line at a fast food joint only to be called up next and not knowing what you want.

When people are unwilling to change their opinion based on new information.

These are all fairly true, I think, though of course your mileage may vary.

What would you add to this list? Do it in the comments!