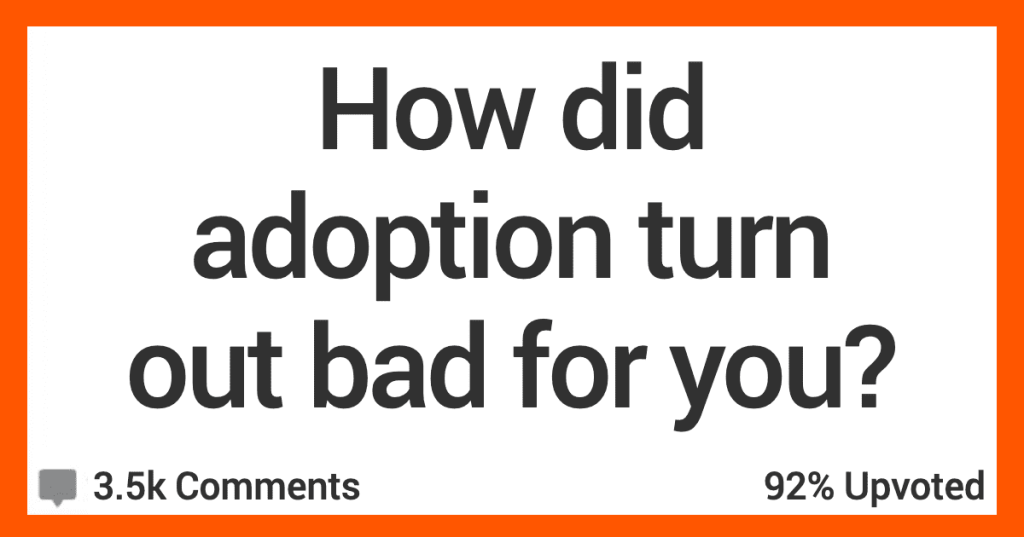 How Did Adoption Turn Out Bad For You? People Shared Their Stories.

I can’t imagine how difficult it must be to adopt a child and then end up regretting it.

And today we’re gonna hear from folks on AskReddit about why they feel this way after they adopted children, were part of families that adopted, or were even adopted themselves.

Take a look at their responses below.

“I’ve told this story a few times, but we adopted a 3 year old. He had a few behavior issues, which we attributed to trauma and sought appropriate help.

He did well for several years, but when he turned 9 he began displaying dangerous behaviors. Hurting animals, hoarding things in his room, making suicidal comments, s**ually inappropriate. We ramped up the doc visits and therapy, but he was still admitted to the hospital 3 times before he turned 10.

When he was 10, we woke up to our house burning down. He thought it was a party. Spent a few years in a facility, till insurance got sick of paying. They told us we could pay $40k a month to keep him there or bring him home.

We have other younger children and his therapist agreed it wasn’t safe. So we refused to pick him up, and now we have a child a**se (for abandonment) record.”

“We adopted twins and the experience destroyed our family.

Psych admissions, drug use, school expulsions, threats on our lives, starting fires, involvement with gangs, wrecked cars, etc. I could go on. It’s the one thing in my life I wish I could undo. We’re not alone.

I knew one mother in town who deadbolt locked her bedroom door and slept with a knife under her pillow out of fear of her adoptive daughter. Another family had to send their adopted daughter off for a year of residential treatment.”

“We have a girl we adopted as a newborn who was unexpectedly (by us) born with FAS.

Her v**lence and impulse control issues as a 4 year old scare me to d**th for the teenage years.”

“I was about 5, sister was 9. Our mother always wanted a big family, but had difficult (near fatal) pregnancies. So they looked into adoption. And that was how a 16 year old (I think) girl came to live with us, on a trial period.

She ended up being a rebellious manipulative individual and as a family we decided not to continue the adoption. I was 5, so I was pretty much suckered… I wonder sometimes what happened to her.”

“I was adopted and sometimes I regret it.

I’m a Korean adoptee living in America and let me tell you, I wish I was still in Korea. Besides the racism and stuff that came from living in a white community, the endless questions like “Are you adopted?” really cut deep.

Sidenote: sometimes I get the worst flashbacks ever and they’re mainly because of racism and stuff against Asians in regards to the fist parts.”

“I have two adopted sisters (biological sisters) who came to live with us when they were 3 and 4. Within the first week they were calling both my parents “b***h” and using other foul language.

Over the years we discovered they both had FAS, one is bipolar and one has Borderline Personality Disorder. They made our lives a constant living nightmare. Any family event that wasn’t focused on them would BECOME focused on them, because they do anything to get attention, especially negative attention. I grew to h**e most holidays, and especially my birthday, because it would turn into a great big fight.

I don’t think my mom regrets adopting, but maybe regrets how she handled things. She’s a very forgiving and benefit-of-the-doubt kind of person. I know my dad regrets it, and the majority of their biological kids do. I certainly regret telling my parents I’d be ok with them living with us.”

“My parents adopted my brother after 5 years of marriage since they couldn’t conceive and really wanted a kid.

They adopted him when he was almost a year old, that was mid-80s back when nobody even thought that babies need to be picked up and held to ensure correct mental development. Some time after that they got pregnant and I was born.

So my brother (3 yo at the time of my birth) had some developmental issues and having a sibling made it much worse. He became jealous of the new baby and started b**lying the little me. B**lying was only the start and he quickly grew into a classic example of an a**ser.

We have endured 25 years of mental and physical a**se, and all the while my parents did nothing, just took it like martyrs, because they thought that they picked him so they have to stick to that decision until the end.

My brother’s behavior was one of the contributing factors to my father’s heart attack and d**th a few years back. My mother tried coping by developing a drinking problem. One of my grandmas d**d of a stroke the same day he went over to torment her.

I have left them all to rot with each other and moved out a long time ago. I don’t want anything to do with a family that sentenced *me* to a life of a**se because of *their* decisions and stubbornness. I think that man belongs in an isolation ward and not a family home.

I’m sure after all the pain he caused my mother regrets ever adopting that child.”

“I’m not the parent. But the sibling of the adopted.

We adopted him when he has 5. Right away there was some behavioral issues but that is to be expected. I mean this kid is getting thrown into a new family and needs time to adjust.

As time goes by, he starts to steal things from me and my biological brother. Lies a lot, and then does some real red flag things like hurting our cats, hit my mom in more than one occasion.

My parents did everything they could for him, therapy, rehabilitation centers, even kept in contact with his biological sister and set up meet ups for them to stay connected.
He was just a terror to my parents, I can’t even explain how much it destroyed me to see my parents be put through everything he did.

In his teens he ends up getting arrested for robbery and destruction of property. When he gets out, Somehow the court systems awards custody to his biological mom and has my parents paying child support to the biological family because legally he is still my parents responsibility. This broke my moms heart.

We(the siblings) are all now adults in our 20s-30s and my dad unexpectedly passed away and when it was time for the funeral, we offered to pay for my adopted brothers flight and he said he would rather have the money that the flight costs then come.

The whole situation is sad. My parents were/are awesome, giving people who completely were dragged through hell emotionally by this kid who doesn’t care.

My dad did admit to me later in life that he does regret adopting him due to the stress it put on him and my mom and how his behavior took away from me and my biological brothers childhood by constantly having to deal with problems he got into which lead to a lot of attention needed to be directed toward the adoptive brother. And my mom won’t admit it, but you can see she has definitely come to terms that he just can’t be saved and he doesn’t want to be.

If I’m being honest, I can’t stand the guy. Haven’t talked to him in 7 years and don’t ever care too.”

“I’m the adoptee. My adoptive mom had some kidney problems that prevented her from carrying a child. Or so she thought. She was told later that she could have.

She told me that had she known then what she knows now that she wouldn’t have adopted me and would have had “her own” children instead. I was about 12 at the time and it was devastating.”

“My parents’ best friends adopted a son from Russia as a 2 year old. He is the poster child of fetal al**hol syndrome effects.

V**lent, learning issues, the shortest temper, the works. His poor (adoptive) parents tried everything. They are great parents and had already raised 3, (two of their own and 1 foster kid). This boy gave them every issue. He was v**lent and disrespectful towards them, towards teachers, toward fellow students, he couldn’t be controlled.

They cried over him a lot. Legally disowned him at 17 after he s**bbed their other kid with a kitchen knife.”

11. From a sibling’s perspective.

“I’m the older brother to adopted special-needs twins. They were born drug addicted and 3 months premature.

In the 6 months they lived with their mother before being removed they were physically a**sed severely. They came to us at 9 months old and in body casts. I was 10.

They didn’t talk until they were three. Diapers until age 5. Severe learning disabilities and emotional problems.

They scream-cried all day every day until they were 8. (This had now been the entirety of my adolescence) When they cried they would drop to their knees and bang their heads on the ground HARD. This was an all day thing.

They are now in their 30’s and have over a dozen children between them that they don’t care for.

I’m not going to tell you about the difficulty of having broken siblings or how it effected my development.

I am now 40 and I haven’t spoken to any of my siblings in nearly a decade. Crying in any form is a serious trigger for me. I h**e children. I got a vasectomy when I was 23. I’m finally in a happy marriage but I can’t handle conflict at all. I’m cold and emotionless. I feel like my childhood was taken from me. I will never accept by adopted brothers as family.”

I never regret the kids. I completely regret becoming a foster parent, probably mostly because of the county that I did. It’s the bureaucratic b******t and the courts and workers that don’t care about the kids that I can’t stand.

I’ve had some really tough kids, and one had to move because we couldn’t keep him safe, but I’ve loved them all regardless of their behaviors.”