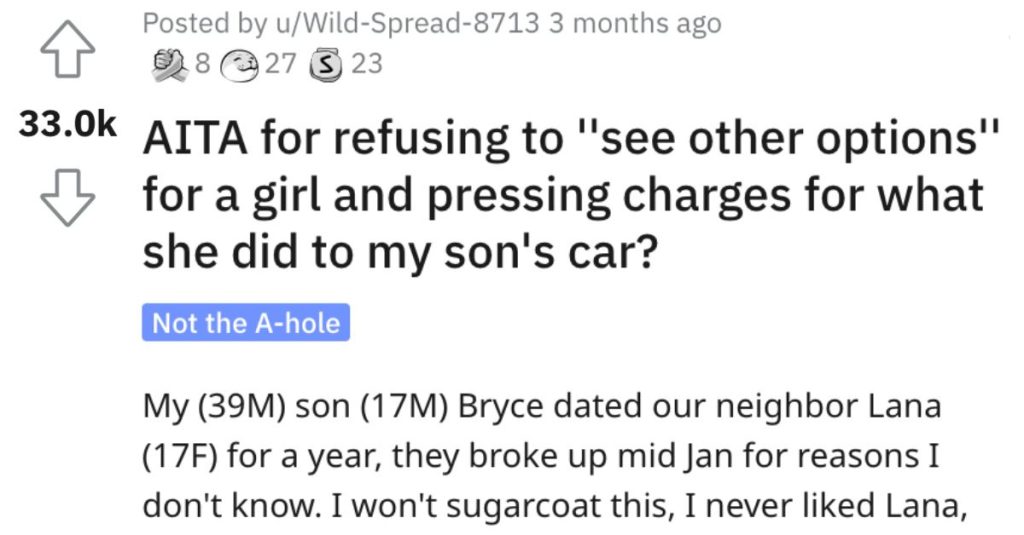 Why wouldn’t you press charges against someone who vandalized your car? Or your kid’s car?

That is the question at the heart of this story from the “Am I the A**hole?” page on Reddit.

Get started now to see what exactly happened here…

AITA for refusing to ”see other options” for a girl and pressing charges for what she did to my son’s car?

I won’t sugarcoat this, I never liked Lana, she always seem a little unhinged, controlling and aggressive, she’s always demanding Bryce’s attention and there were quite a few times when she showed up on our house our of nowhere (whether it was 7am or 11pm) because Bryce wasn’t answering his phone, screaming and calling him a cheater when it wasn’t like that. The thought of our son getting abused by his gf made us worried so much.

My wife and I tried to talk him out of that relationship, we said how that it wasn’t normal nor healthy, we didn’t want to force the break up because we feared Lana would lash out to him so we tried to do it in an sneaky way, we don’t know if it worked but they ended up breaking up.

He said that after he broke up with her Lana didn’t contacted him which was weird because he expected her to go nuts but I told him that if fate didn’t gave him s**t he better not tease it.

Now the problem is that we bought my son a car for Christmas, nothing fancy but enough to get him to school, his job and eventually college, he parks it in our driveway outside our home.

Ever since the month began we had been founding scratches all over the car, we know Lana was doing it but since it was minimal my son decided to not do anything even if we could prove that it was her (we’ve CCTV). Still, something smell bad for me so I decided to switch one of the cameras facing his car directly just in case.

Well, two weeks ago we got up and we found my son’s car covered in a lot of s**t: paint, glue, feathers, confetti, the door handles were wrecked, flat tires, paint all over the windows, you get the picture, Bryce and my wife were so distraught. We called the police and I handled them the CCTV that showed Lana and her brother (23M) destroying my son’s car.

We pressed charges and needles to say, Lana’s brother went straight to jail, but since she’s still a minor her parents want to make a deal but I refused. I don’t think she should get a way out, before the police was here she was laughing her a** off and she tried to play it cool, if she thought this was funny then she’s old enough to face the consequences. My wife and I want to stand our ground, they said they’ll buy my son a better car and put Lana on therapy but is not enough.

One person said this dad is NTA and that his son’s ex and her family needs a wake up call. 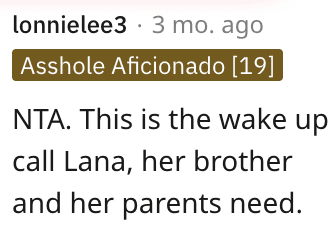 And this Reddit user had some interesting thoughts about this story. 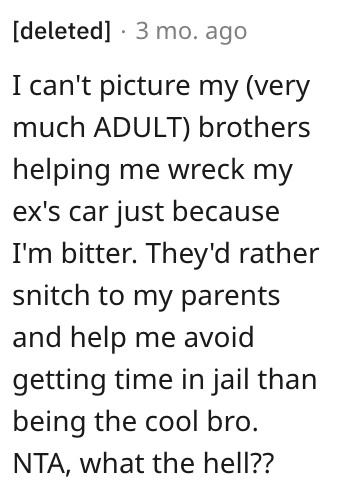 Another individual recommended an arrangement that this guy might want to consider. 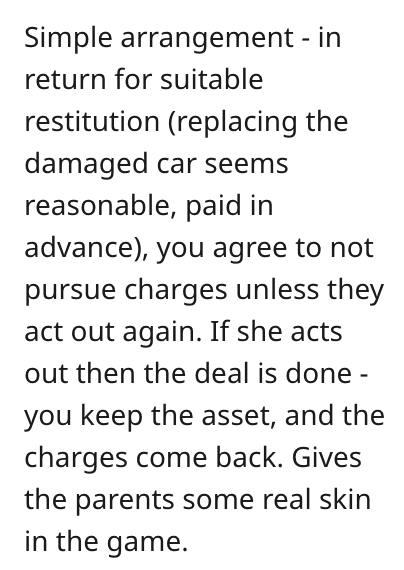