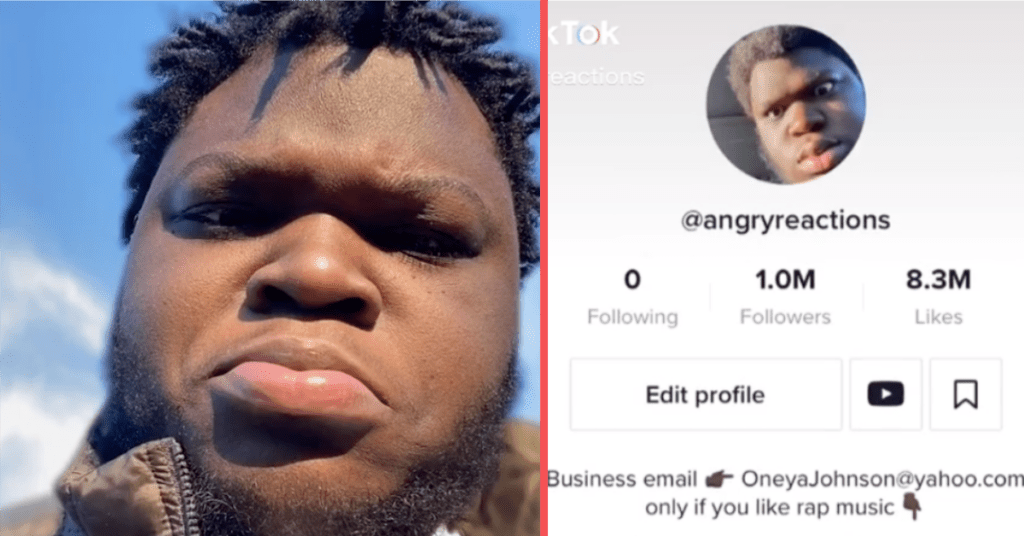 If you’re a TikTok user, have you heard of a guy on there who goes by the handle “Angry Reactions”?

If not, you’re missing out. His real name is Oneya Johnson and he’s become a viral sensation on TikTok. Johnson created the account in late August he incredibly gained one million followers in 24 hours when people caught on to his hilarious personality.

Johnson’s whole schtick on TikTok is just like the name implies: he reacts very angrily to other TikTok users’ content but it’s all meant to be in good fun.

#duet with @bobbysrey that cake is beautiful. #fyp #foryou

And despite his viral fame, many people were very surprised to learn that Johnson has been homeless and was filming the hilarious TikTok videos in his car in Lafayette, Indiana.

He was evicted by his landlord from his previous home in Michigan where he lived with his ex and he made his way to Lafayette because his brother lives there.

Since then, Johnson has been living in his car.

Shouting matches with his ex were ultimately what got him evicted from his place in Michigan, but Johnson said he and his ex are on good terms now and they share two children together.

Never give up ❤️

“I basically took how the world sees me, and how I really am, and just matched it together.

If I passed you on the street and I don’t say a word, I look like the angriest person in the world.

But when you actually get to know me, I’m actually a really positive person.”

Keep an eye on this fella and let’s hope he gets back on his feet sooner than later.

And keep enjoying his funny videos!