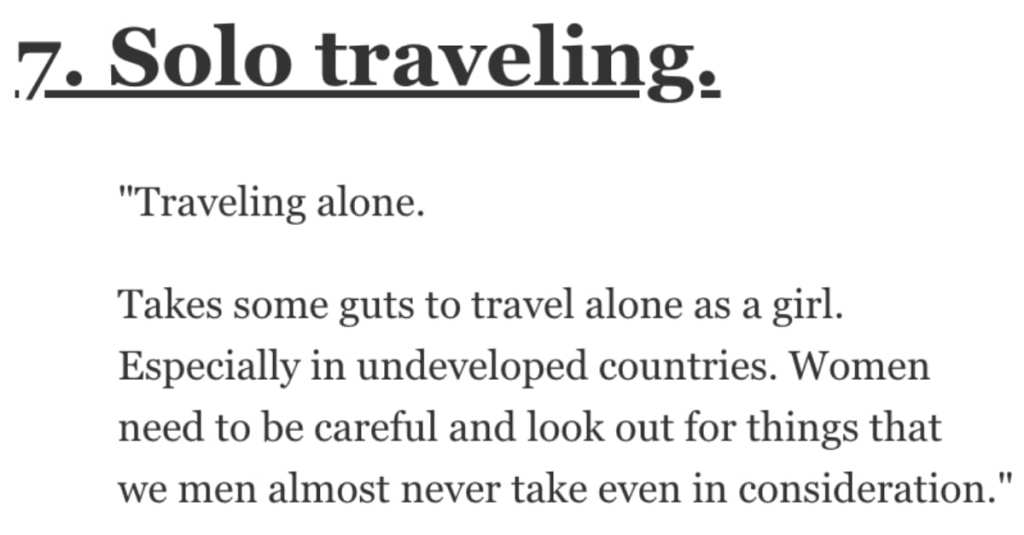 Men, What Can You Acknowledge Is Harder For Women? Here’s What the Fellas Said.

But it’s still important to go on the record and recognize that some things are harder for the other side, and it ends up bringing us closer together.

Men, what can you acknowledge is harder for women?

Here’s what guys had to say on AskReddit.

“Not for all women, but many take a lot of time to get ready because they feel it’s required.

Most men brush hair out of the shower and that’s it.”

2. Lots of creeps out there.

“Creepy people following you. My girlfriend walked home from work sometimes. It wasn’t far and it was in broad daylight.

This guy drove by and asked to give her a ride. She declined said she was almost home. When she got home she told me about it and how he kept driving up and down the street looking at her afterwards. He followed her into the apartment complex and parked his car to watch her go into the apartment. I was obviously upset.

I went out with her so she could point him out but he had left. It was weird. I told her to call me right away if she sees him anywhere near here.”

When I began in the military everyone including all the girls were in far better physical condition than I was.

Two Months in I was bringing in a better performance than all but one girl. The difference in muscle growth, etc. is simply at a level where women are never able to keep up with men who put even half the effort in of them.”

“Pressure to be a perfect parent.

My partner would get approached by strangers at grocery stores and parking lots and criticized for random stuff she was “letting” our then-2 y.o. get away with it. When I was public with our child, it was pretty much “Oh look at the good dad!” for just being.

The wicked stepmom trope pretty much reinforces how the expectations are set at a huge bar for women, while deadbeat dads make it a shrugging “oh well, that sucks but what are you gonna do?” bar for men.”

My wife will occasionally get a UTI after s** and has to suffer the discomfort and the irritation of trying to get a GP appointment (UK) while convincing the witch of a GP receptionist that you want an appointment today.”

“Large b**bs seem like a curse to me (I wouldn’t want to own them if I were a girl but they sure look cool).

They can cause back problems and just look unwieldy and the only upside of them making you more attractive to many people is also a major downside when it comes to creeps/unwanted attention.

In general they get s**ualized more explicitly than men, with more of their value being tied to appearance than men deal with. Both can be insecure with their bodies but society definitely puts more pressure on women.”

“Traveling alone. Takes some guts to travel alone as a woman.
Especially in undeveloped countries.

Women need to be careful and look out for things that we men almost never take even in consideration.”

“The risk of dying when having children. Yes I know men can’t have children but hear me out.

I work in a maternity theatre and see hundreds of births every year. It amazes me the amount of s**t and pain and risk that women have to go through to have kids. Seriously, my respect for women has no bounds. I see what they go through during childbirth and I think I could never do that.

By the time they get to the emergency theatre they’ve usually already been struggling to progress for various reasons for HOURS!!. They arrive tired, scared, upset, worried, bleeding, in extreme pain and feeling a million emotions in between. Add into that that things can take a turn for the worse very quickly and it is quite scary for the theatre staff as well.

Ladies, just know, if you come into the theatre when I’m on duty, I got your back. I don’t think us men appreciate this quite as much as we should do.”

I have a friend who has irregular periods caused by a hormonal thing and I can’t even think of dealing with that.”

“The prospective weight of s**ual encounters.

What is fun for one could be a life-altering disaster for the other.”

“The constant talking down to and the constant looking down upon. I’ve seen this in all areas of my life but it became prominent when I was a technical trainer at a large web hosting company.

I had a handful of incredibly brilliant women techs that were berated, insulted and man-splained to on an hourly basis by customers either via phone or chat.

I mentioned this to the director of our department who didn’t seem to believe me. Unbeknownst to him, I allowed several of the women techs to change their names in our chat program to more male sounding names.

Nothing else about their approach changed but the results were astonishing. Within the span of the first week, all of their NPS scores skyrocketed. A month into it, several were nominated for employee of the month awards.

My manager asked me how we were able to turn things around and I confessed that I let them change their names. I graphed several KPI’s to show that nothing else about what they were doing had changed.

I would listen to calls where men who would fall just short of saying they didn’t believe a woman could know such technical things, only to be transferred to a male tech who provided the exact same information. Only then was it accepted and acknowledged as believable.

My hats off to all women but a special shout out to women in tech. The amount of bullsh** I’ve seen you all have to deal with is astounding and embarrassing.”

“No one talks about Menopause at all but it truly does suck.

Imagine having to go about your normal life with all of this s**t and then smiling and pretending everything is normal because otherwise you’re a b**ch.”

Now we want to hear from more men out there.

In the comments, please tell us what you think is harder for women than men.