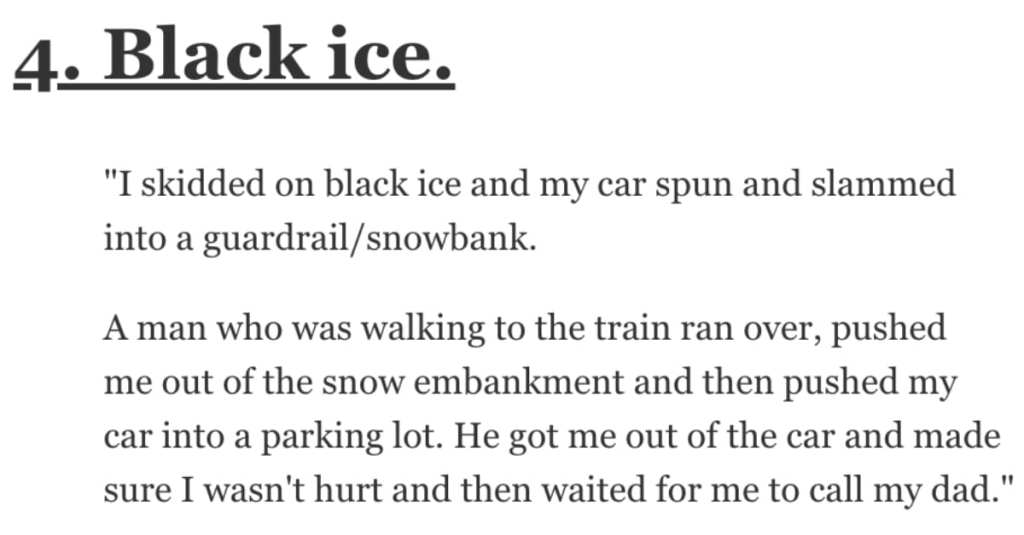 Like you, I’ve had experiences that really run the gamut when it comes to dealing with strangers: good, bad, weird, and ugly.

But I try to keep an open mind and be nice to everyone when I first meet them, even if it’s a random man or woman on the street.

You just never know what will happen when you encounter folks you don’t know.

AskReddit users talked about the encounters they had with strangers that they’ll never forget.

“When I was in elementary school I fell through ice. A man who was walking his dog saw me fall and rushed to the shore.

I frantically swam back to the shore, I was only about 5 meters in to the pond so it wasn’t a long way, but it took some with soaked winter clothes. When I reached the shore, the man pulled me up by my jacket. It would’ve been difficult to get up, as there was a steep incline.

I didn’t thank him, because I was in shock, but I bet he knows I was grateful, and 20 years later I still hope I would had thanked him.”

“I was waiting for my appointment with an optometrist when an old Haitian man walked in with a grocery bags.

The receptionist knew him so he walked up to me and proceeded to ask me riddles. When I finally got the answer to one he reached into his bag and gave me a snickers then left.

To this day I’m really curious as to what would motivate a man to become a wholesome riddler.”

“I was doing tech support and my customer was so happy with my service she offered to marry me to her daughter.

“I skidded on black ice and my car spun and slammed into a guardrail/snowbank.

A man who was walking to the train ran over, pushed me out of the snow embankment and then pushed my car into a parking lot. He got me out of the car and made sure I wasn’t hurt and then waited for me to call my dad.

I lived close so he listened to me confirm my dad was like 3 mins away and then took off running to catch his train.

There was so much black ice and cars were sliding all over. He very easily could’ve saved my life. I wouldn’t be able to pick him out of a line up today but I will never ever forget his kindness.”

“The gentleman in a business suit handing me his umbrella in the middle of a downpour.

We just were passing each other on the sidewalk, our eyes met and he just handed over the umbrella with a “hear ya go.”

“I was on a tram and I didn’t have a ticket and the ticket inspectors came on.

I got asked to have my ticket seen and I said I “couldn’t find it on me” and he said he’ll come back so I can look for it. There was a stranger sat on the seat behind me who had a ticket, he gave it to me and he got off at the next stop.

Guy gave me his ticket so I wouldn’t be issued a fine.”

“When my wife and I first started dating, we were walking into a Trader Joe’s holding hands.

This elderly woman looks at us and says rather loudly “CUTE COUPLE ALERT!!”

My wife and I still laugh about it, it’s been 12 years at least.”

8. Nice people down there.

I was fiddling with my camera on a train platform in Melbourne, Australia, trying to take an artsy shot of the trains or something.

I noticed through my viewfinder a guy about my age (early twenties or so at the time) full-on flipping me off on the train on the opposite platform.

I lowered my camera, laughing, and flipped him off back. He laughed. The train started to pull away, and I waved, and he waved back.

“When I was younger, I went grocery shopping with my dad.

As we were walking, an old man stopped us and handed both me and my sister a shiny one dollar coin. He told us that he wanted us to have them and to have a Merry Christmas.

I never saw him again, but I think of that kind old man from time to time.”

“I was at a pool bar at a resort in Jamaica.

A British lady next to me asked me the most random question, which turned into a nearly three hour conversation.

The question: What is a redneck?

It was a lot more difficult to explain than I thought it would be.

I didn’t realize that was an unknown concept to a lot of Brits.”

“I was driving down south with my girlfriend, we have a blowout so I put on the donut. The donut blows out while we’re exiting the very next exit.

So there we are maybe 19 and at least a hundred miles from anyone we know at a gas station in the middle of nowhere. I’m thinking on what to do next, and probably looked like there was something wrong so this older man offered to help. He drives me 20 or so minutes to a junk yard to get a cheap tire.

Then he puts the tires on the rim with no more than a pry bar and some soapy water. Had a compressor on his truck so he aired it up and I put it on. And we went on our way.”

“The lady who told me I looked great in blue, and that it was clearly my color.

To this day if I’m deciding between shirts to buy, or wear, I’ll go with blue.

That compliment was about fifteen years ago at least.”

“When I was super overweight, I was just starting to workout somewhat regularly. Being morbidly obese at the gym is terrible – I have never felt more eyes on me before in my life.

I was on a treadmill, grinding out some inclined walk/ light jogging, and a super fit girl got on the machine next to me (this was all pre-COVID). She did a short warm-up, and before she got off the treadmill she turned to me and gave me a high five and told me to keep it up.

It was so encouraging to have that support, when I was used to getting stared at by everyone else in the gym. Her small, kind gesture went a long way!”

“The biggest one was when I was homeless and asked a lady for the time. She told me and asked if I wanted to share her sandwich and the paper.

She was the first person to treat me like a person, like I was worth something in years. I never got her name but I will remember her fondly for the rest of my life. I know that she’ll never, ever know what a difference she made in my life.

Just that one simple thing she did and the humanity she showed me changed my life. I got sober just a few days later and completely turned my life around.

One person, one smile, one kindness that you may never think of again in your life can change someone else’s life beyond measure.”

Have you ever had an encounter with a stranger that you’ll never forget as long as you live?

Talk to us in the comments and share your stories with us.