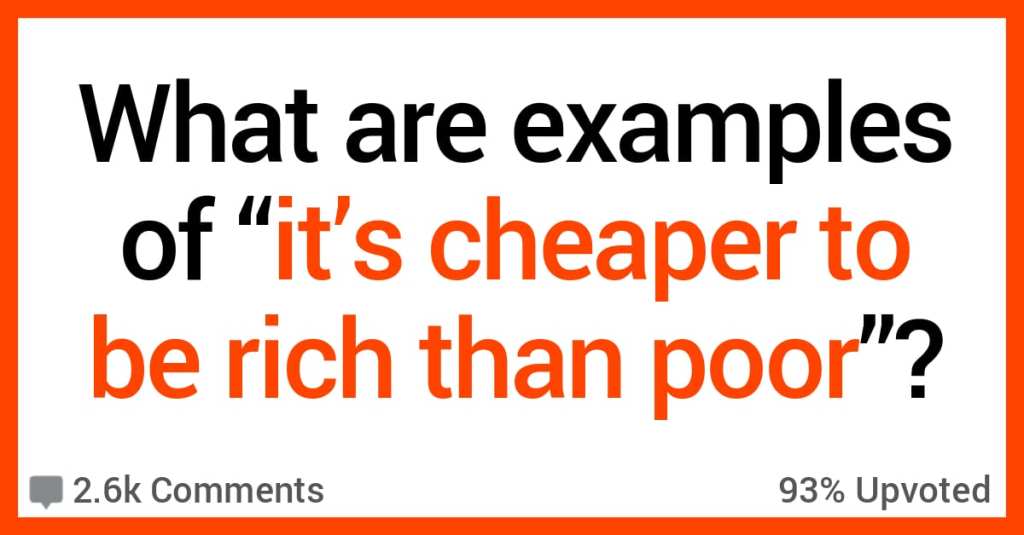 If you live a relatively comfortable life, you probably don’t think too much about a lot of things that poor people do.

Like lugging your laundry to a place to get it done while you wait. Or having to repair the same car problems over and over again. Or always renting things instead of owning them.

Those things really add up and make being poor a real grind.

AskReddit users talked about why it’s cheaper to be rich than to be poor. Let’s have a look.

“I worked in the business/accounting office of a car dealership for 2.5 years. I remember going through files and thinking “Man, I wish I could afford to write a personal check for $28,000.”

And that person who had $28k to spare is going to be paying less overall than the person who makes half that amount in a whole year, who gets forced into a 14%+ interest rate (yes, really. I’ve seen 24% at times) just so they can have a car to get themselves to work when theirs breaks down beyond reasonable repair.

We once had a guy (almost) max out four different credit cards paying for his car, and when our finance director tried to tell him “You’d qualify for a much lower interest rate on a loan with [manufacturer] than the interest rate on these cards,” the guy brushed him off and said “I’ll have all of these paid off in two weeks.”

So presumably he had the money to just hand us a check, but was getting a lot of cashback on these large purchases on his (very high limit) credit cards.

The difference between that and a 24% interest rate on an already used car is just so unfortunate.”

“I used to rent this apartment in Manhattan on Thompson St. by Washington Sq.

I’ve also lived in Chinatown, UES, Brooklyn, East New York, and Ridgewood, and always used coin-operated self-service laundry because “why would I pay more for someone to do my laundry?”

Well, The first day I moved to Thompson street I wanted to clean some sheets and clothes—good thing there’s a self-service laundromat across the street. I popped in and filled two medium size machines.

It was something crazy like 30 quarters for each machine and 4 minutes per quarter to dry. All in all it cost me about $45 and 2hours of my time to wash and dry everything. I told a few coworkers who live fairly close-by this story and they asked me why I do my own laundry because it’s more expensive.

The next week I canvassed the 2 block radius of my apartment and found a korean dry cleaners and laundry service. I started bringing my laundry to them, who export it out to BK or NJ, and they bill me $19 and tie a bow on top. I still can’t believe how much cheaper it was and that the self-service laundromats in “nice neighborhoods” are a scam

Poor me would never think a rich move like laundry service would save money over doing your own.”

Best job I ever had was at an engineering firm that got so many applications, if you weren’t referred by a staff member, your resume got tossed.

My dad was drinking buddies with the hiring persons husband so she referred me, hired me and was my supervisor for 2 years.”

I used to travel for work, expensing meals, hotels, flights, etc. on my personal card and then expensing them later.

I rack up so many airline, hotel, and credit card points that I can generally do at least one nearly free vacation a year or at least pay for two international flights.”

Medicaid is cheap but isn’t taken everywhere. But my platinum plan costs me nothing (no copay, no deductible, no coinsurance).

Most jobs that have this benefit pay really well.”

Rich people with better credit ratings, when they DO need to borrow money, don’t pay as much for it.”

There’s been a debate in my country whether they should have them freely available in schools for everyone up until their 25th birthday (as we already do with contraception in pharmacies), since 40% out of all 14-25 year olds cannot afford them.

The amount of people saying that “they should just buy reusable pads if they can’t afford the single-use ones etc”…! They completely disregard the fact that one reusable product is more expensive than a pack of single-use pads, which 40% can’t afford already.

Not to mention the “they shouldn’t buy iPhones and make up then”-folks. Some people just don’t know what it’s like to be poor.”

“Getting arrested costs way less if you have money.

Paying out of pocket for a lawyer may cost more up front, but if you can’t afford one (or even bail) you will be in a much harder spot. You could easily lose your job if you have to stay in jail until your trial. Court appointed attorneys are often incredibly overworked and will not work as hard to get you a better deal.

Then if you can’t afford the legal fees to seal your record that arrest could prevent you from getting a job that pays well enough to afford a lawyer.”

“Growing up without a computer makes poor kids fall SO behind their richer peers.

My friend works as a teacher for inner city high schoolers and most never owned a laptop until the school gave them one for covid. They don’t know how to use the essential applications. At one point my friend literally explained to them how to Google anything they need. They were kind of dazzled.

In comparison, my boyfriend’s son is 9yo (middle class) and literally making spreadsheets and video games. He knows how to Google anything he wants and works a computer as well as an adult.

This gap in knowledge is going to greatly affect poor kids in the future as computer knowledge will be a must in almost any job.”

“Everyone’s gonna say rent vs mortgage, but there’s more to it than just equity.

Another aspect is that there’s an opportunity cost to buying that’s not immediately obvious – and that cost is significantly reduced, if not outright inverted to a benefit, the better off you are.

And that is jobs.

Say you and your neighbor are competing for a job. The job is in another city with a comparable cost of living — it’s not going to be any more or less expensive to live there rather than here.

Except… you can’t really afford both a mortgage and rent. You need the proceeds from the sale of your current home to buy a new one. And that’s on top of the huge expense that is moving your stuff to another city.

It’s going to be a pretty significant hardship to actually accept the new job. Sure, once you’re there it’s a clear benefit but you can’t actually afford the transition.

Your neighbor, on the other hand, is a bit more well off than you, they have more savings, pay a smaller % of their income in housing. Even though the job is only a 10% raise for them, they can actually afford to move and take it.

They can afford to pay rent and the mortgage for a couple of months while waiting for the house to sell so that they can buy a new one while maintaining adequate reserves.

Your other neighbor on the other hand, makes even more money than either of you and has even bigger savings. Sure, the job is only a 5% raise, but they can afford to just outright buy a new house in the new city and retain the old one, hiring a rental management firm to get in some tenants.

Sure, between landlord expenses and the management company’s cut they don’t even pay for the mortgage from the tenants, but it’s close and they keep on building that equity for very little cost.

You other other neighbor makes more than all of you. He gets a management job at that company for a 10% raise, but the company pays for all of his moving expenses, including 4 months in an apartment while he secures a new house.

He has basically zero cash outlay to move except for the fast food and gas on the drive over to the new city. He doesn’t understand why some people turn down jobs that pay better because they can’t afford to accept.”

“Being sick. At least in the USA.

The sick policy is usually more generous the more $ you make and if you’re an hourly employee with no sick days you work or you do not get paid.

If you have to seek treatment or, god forbid, go to the hospital then you better hope you have decent health insurance or it will cost you an arm and a leg.

Many Americans are one medical emergency from total financial ruin.”

What do you think are some prime examples of this phenomenon?