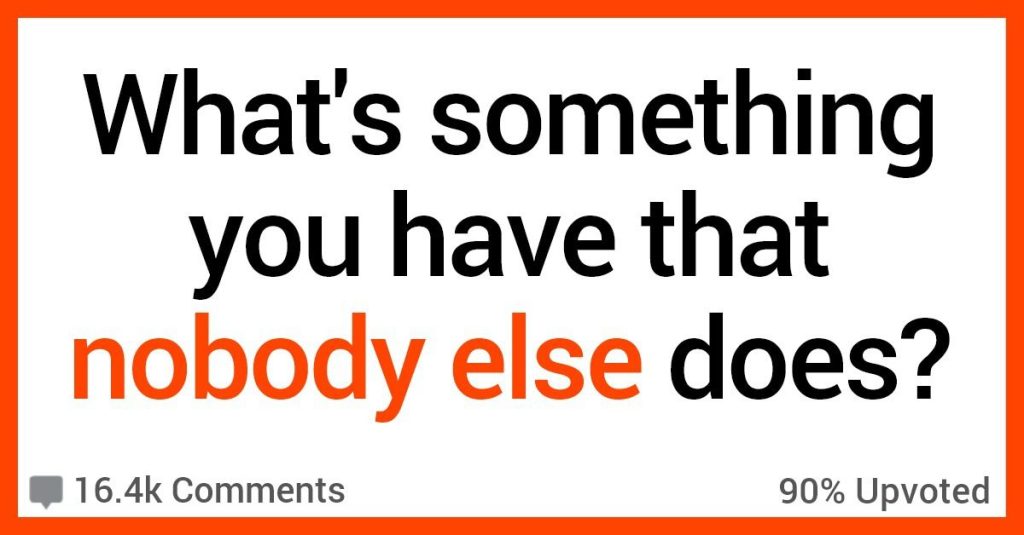 People Reveal the Unique Things Only They Have

Some things are priceless. Others are worthless. And it’s very important to know the difference between the two.

But even among possessions, there are some to be prized simply because they are unique. And there’s no better place to go on a unique treasure hunt than Reddit.

What is something you have, that your pretty sure no one else has? from AskReddit

My grandfather was on the USS Indianapolis during WWII and was transferred off of it before they delivered the bombs and it sank … he happened to take a book from the ship’s library and never returned it.

I inherited all of his books and happened to stumble across it while going through them… it’s stamped with the ship’s library stamp.

So unless any other sailor took a book from the library of the USS Indianapolis before it sank and then held onto it all these years, this may be the only one in the world.

25yrs ago my then bf was working as the lowest ranked barrow pusher on a building site. Foreman knew that ancient bones may turn up and knew he was supposed to send for the archaeologists if so.

Bones turned up, foreman said f**k that, we’re filling in, not getting behind schedule for some old s**tty prisoner bones. BF tried to say something but would have been fired if he pushed it.

He was pretty horrified but couldn’t lose his job, and crept back to take a bone after the site closed. In his mind it was a way of saying we’ll remember you, even if you’re under concrete.

We were only teenagers, so didn’t really know what to do with it for the best. I have kept it in a box ever since. I know I should do something with it.

I have tickets to some MLB playoff games that never happened. My Grandmother worked for Ticket-Tron back when that was a thing. She left behind a bunch of memorabilia. Some used tickets to events and such. Ticket-Tron handled all the Mets affairs back then, too. So, we would always get tickets to games.

In all of the things left behind are two different bundles of three tickets each for The Mets 1985 playoff games. Only, the Mets didn’t make the Playoffs in 1985. I am unsure if it was a printing error for the 86 baseball year, or they were printed off in expectation of them making the playoffs…but either way, I have them.

I inherited a real Apollo 11 patch (that went to the moon) from my grandfather who worked on the mission and my aunt gave me a Mercury Astronaut test helmet worn by Alan Shepard.

My father works for a ball bearing company. They developed the world’s longest spinning fidget spinner for the Guinness Book of World Records as a PR piece.

He got to keep the spinner after the trials and it now sits at my desk at home.

Bluejacket’s didn’t change nearly as much as the BSM did.

7. A Can of Emergency Water form the Korean War

I was racking my brain because I/my family have a lot of interesting things, but I feel like this is something that very few people would have.

I’m a descendant of Meriwether Lewis (of Lewis and Clark). I have 2 of his journals that he wrote in before his famous expedition in America.

They are priceless and have been passed down by and through the men in my family until they eventually found their way to me.

I have a movie magazine for the god awful 1987 Garbage Pail Kids movie.

Had a choice between that or a collectable magazine for the Tim Burton Batman movie.

10. A Finger Painting from a Chimpanzee

My mother was friends with a woman who worked at the local zoo.

For enrichment, they taught the chimpanzee how to finger paint.

I was obsessed with chimpanzees when I was younger, so my mother asked her to save a painting for me.

It’s hanging next to my bed. The chimp is dead now (old age) but his artwork will live forever

In 2006 I had surgery to correct hammer-toes.

The ortho surgeon told me my bones had a “blue tint” to them.

Me: hmmm, well what does that mean?

MD: You know, I am not really sure.

Me: Maybe it indicates some sort of weird condition?

MD: I wouldn’t worry too much about it.

MD: It certainly is curious.

A is for anomalous. I can’t give or receive.

Born with hemophilia but developed platelets around age 3.

My blood has been used to develop treatments and pharmaceuticals.

13. A Zelda: Link to the Past Painting

With Link holding the master sword and his back turned to the viewer as the game’s title cuts through him.

​Apparently only two were ever made, and I have one.

When I was 10 I won a contest at a booth in a Kmart in Upper Michigan to see who could stack the tallest single tower of Oreos in 30 seconds. The tower then had to stay upright for another 10 seconds or so. I think my older brother beat the old record by one, then on my turn I tied him but I had time left and my Oreos looked sturdy so I threw another 5 on even though my parents told me I should stop. It stayed upright and they took my name and number down.

After a week nobody beat my sweet a** Oreo tower so I got a call saying I won, and had a chance to go to like, some sort of Oreo stacking regionals.

I didn’t know about that, and neither did my parents, so they sent me a cool baseball that says Oreo Stacking Contest 2002 that I keep to this day.

While it’s highly likely someone else has one by the same manufacturer, maybe even of the same style, because it is hand-crafted no one else can have exactly the same piano I have.

Made of cherry wood, with original ivory keys.

Lotta priceless stuff there! Some of it should maybe find its way to a museum.

What’s something unique that you have?