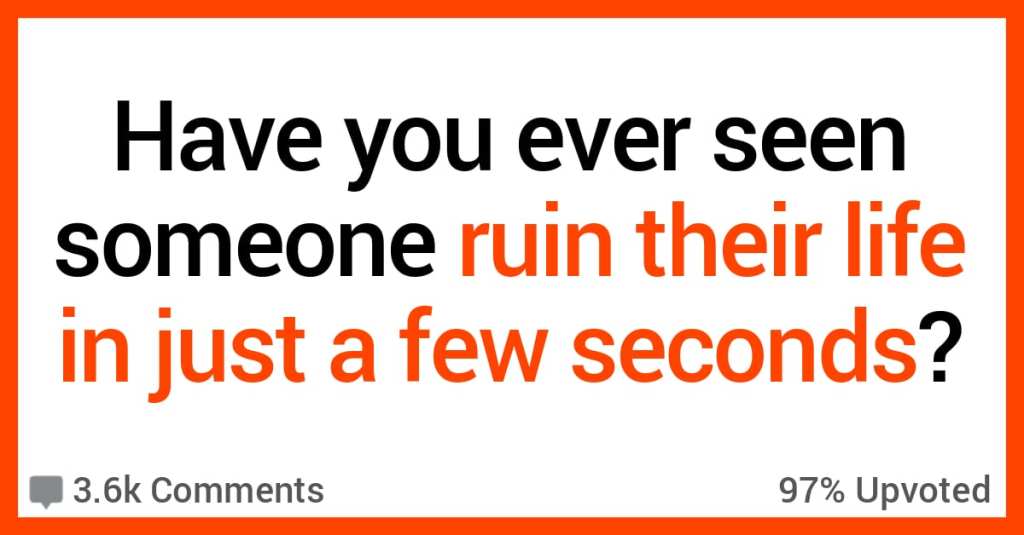 When I was growing up, my dad was constantly telling me cautionary tales about this and that.

Of course, being a teenager, I usually just rolled my eyes and nodded my head, but now that I’m a bit older, I completely understand what he was talking about: everything in life can change in an instant, and you need to make good choices and try to avoid bad situations when possible.

Folks on AskReddit talked about when they saw people ruin their lives in just a few seconds.

“A friend’s kid, just got his license bought a new car but couldn’t afford insurance.

Hit an electrical infrastructure box, wasn’t injured but up for $120,000 and went bankrupt.”

“Growing up I lived across from a large hill. When I was like 14 some older kid decided to try to go down the hill on his skateboard without a helmet. There was a 90° turn at the bottom of the hill. His board slid out mid turn and he hit his head harder than I could imagine.

He was unconscious until about 10 minutes after the ambulance pulled up. Ended up having pretty much no memory, was fully paralyzed, and his brain reverted back to the IQ of a 3 year old. He didn’t even know his name or recognize his parents.

I always felt bad for him as he was just trying to show off to his friends (who were rooting him on), although yes I know it was a horrible decision on his part. Always wear a helmet!”

“A mate of mine was offered crack by a fairly famous musician that he was obsessed with. He wanted to hang out with him so badly that he did.

Got in the car and I didn’t see him until the next week. He seemed fine at first but then over the course of the next few months he deteriorated quickly. Started hanging out with local crackheads. Crack turned to meth, lost touch with him for a few years then ran into him in a park locally and he looked like sh*t, he hid from me.

I found out a few weeks later than he had a kid with another meth head and they had the kid taken off them which sent him off the edge and he completely lost his marbles. Every so often I would run into him in bizarre places but he would look away and pretend he didn’t know me.

Then one day he disappeared completely.”

“I knew a guy, he and his friends were into that trend of going to really high places and taking pictures of them hanging from them.

The guy I knew got to the top of one of those massive crane things and while taking the picture he fell.

He died upon impact with the ground and now whenever I see pictures like that on social media I want to cry and beg these people to stop before they lose their lives.”

“A family friend who was the coolest, nicest MFer you’d ever meet. Had his sh*t together and life just seemed good for him.

One night partying a random person offered him some hero*n.

Fast forward ten years later and his wife has divorced him, took his kids. He lost everything he possibly owned. Sold all sh*t he had left to buy more heroin.

Now is a bitter, shell of his old self living on the street. He’s probably dead by now.”

“This guy was drunk and decided to leave the party, and not wanting to go the long way home, he decided to walk on the side of the highway.

He got hit by a car, and survived but was constantly in pain and couldn’t care for himself. This happened about 4 years ago, and his family “allowed” him to end his life last year.

I can’t even imagine how hard it was on his parents, allowing their own child to end his life so he wouldn’t suffer anymore. My heart breaks every time i think about him.”

“Bartending in Atlanta, had a group come in that was in town from Minneapolis for a work conference.

We got them a round then realized how hammered most of em were and cut off the group. The head honcho was everybody’s boss (I believe he owned the company, he was the only one in his right mind because he was leading the conference the next day, cool guy actually). Anyway they decided to get a ride to a strip club to keep the party going, and I got them some chips and queso to munch on in lieu of drinks.

Queso comes out, the drunkest guy thought it was soup, and wanted to test this hypothesis by putting the d*mn skillet to his lips and burning the sh*t out of his mouth, it was ugly. Head honcho jokingly said “I never should have hired your dumb *ss” and drunk guy immediately punches him in the teeth, harder than you’d expect a dude who can barely stand to be able to hit.

Head honcho goes to the bathroom with a bloody mouth and a tooth in his hand, and the rest of the group got buddy outta there. So in a matter of seconds this guy turned a fun night into 2nd degree burns and a trip to unemployment. I would imagine he was hard pressed to find another job in that field.

“Friend of mine had an old restored jeep from like the 70s. Antique plates and everything.

Ended up driving on the freeway really fast, jeep went crazy and flipped.

Broke his arm, now has neurological problems and had to leave his six figure job to living at hone with his parents.

He was engaged and that ended as well after his accident.”

“Saw a buddy, my best friend at the time, ride his crotch rocket into the side of an apartment building.

We were waiting for a friend to come down. We were goofing off doing burnouts & wheelies in the parking lot. Dumb.

He slipped up & whiskey throttled it right into the building. People from 2 apartments over came out to see what happened. He nailed it. Was doing about 40mph.

Totaled his bike. F*cked up his shoulder. Got hooked on pain pills.

We intervened, tried to help him. He robbed a few friends houses over the years.

Burned a lot of bridges. Last I knew he was homeless.”

“Girl I know went sledding and ran into a tree.

She had to relearn to walk but walking is a generous term for what she is able to do.

Probably won’t ever be able to walk completely normal again.

Sucks because she used to love hiking mountains.”

“Showing off for attention.

We were a group of U.S Marines traveling from LAX to Camp Pendleton in a school-type bus.

A woman pulled up next to us in a Jeep CJ-5 on the I-5, unhooked her seatbelt, and began flashing skin at us.

Of course, we cheered her on. After two minutes, she got bored and drove off.

Ten minutes later, we encountered a traffic jam. As we passed the blocked area, we saw the Jeep on it’s side and the woman laying nearby with most of her brains about five feet away.”

“Friend decided drunk driving was the appropriate thing to do.

He hit two 13 yo girls walking home from school shopping at the mall.

Now he is in prison for the rest of his life.

Ruined their families lives in addition to his and his two daughters who were very young and will never see him outside of prison.”

If so, share your stories with us in the comments. We’d sure appreciate it!