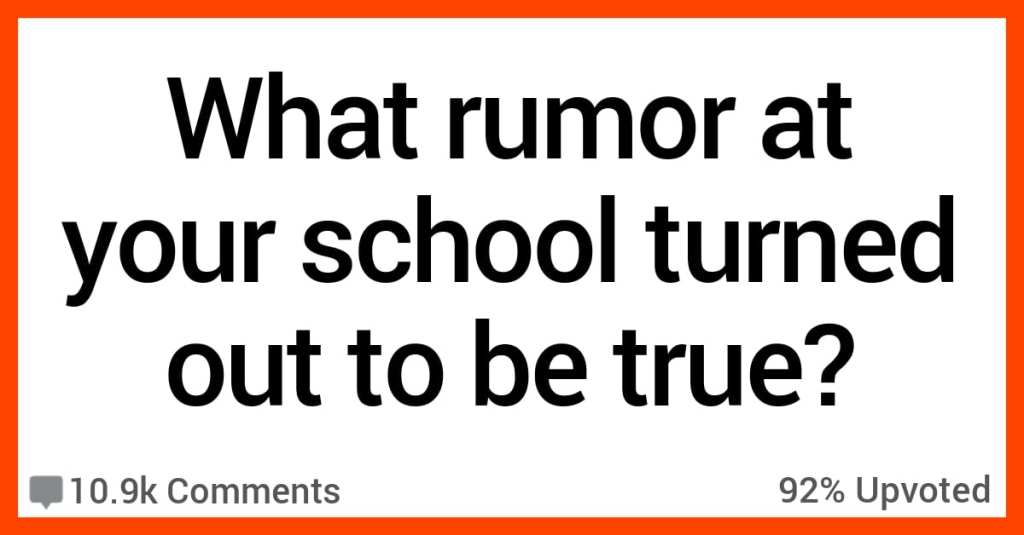 I’m having a hard time pinpointing one BIG rumor that captured everyone’s attention when I was in school, but I think it had something to do with a girl in my class getting pregnant and having to leave school due to her parents’ shame.

And I honestly can’t remember if that was true or maybe that poor girl just moved schools for another reason and had to deal with all that gossip.

Schools are total rumor mills, in case you forgot.

Folks on AskReddit shared stories about big rumors at their schools that turned out to be true.

“In middle school, we had a “cool” Social Studies teacher. He loved the popular boys, especially the athletes, and not only ignored bullying in his classes of unpopular kids, he often took part in it.

He also offered up his services for tutoring to these boys. Everyone always thought he was a child mol**ter, except the popular boys who would threaten you if they heard you talk bad about him. When we came back to school at the beginning of 8th grade, he was gone. As was one of the more popular boys in school. He transferred to an insanely expensive private school.

Turns out, sure enough, he was mol**ted by the teacher several times during tutoring sessions at the teacher’s house. The school district agreed to pay to send the kid to private school as part of a settlement.”

“That this girl at my school who was maybe 16 was banging all the older kids who never left for college.

Well she definitely was and everyone found out when she banged one of the cooler guys still in high school and there ended up being a herpes outbreak at my school.

“Some girl had s** with her half brother.

We all thought it was rumor until she got drunk at a party and told everyone.”

“I had a science teacher that was rumored to get a bo**r whenever he started shouting.

We thought it was a myth until we noticed it for real, he would always try put one leg up on a chair to hide it”

“At our school this one kid was rumored to be a son of one of the local gyms amateur boxer teacher.

None of us had no real reason to think twice about it. Once we got to high school this kid started teasing that kid. I had a couple of mutal friends with the bully so I warned the guy he might want to let up on teasing him. A couple days go by the dude didn’t stop. And the boxer’s kid proceeded to give this guy one of the worst one sided fights I have ever seen.

The bully learned his lesson and never bullied anyone else for the rest of our high school years. So it turned out to be true.”

“In middle school, there was a rumor my 7th-8th grade Social Studies teacher owned a pet donkey.

Turned out to be true.

The donkey’s name was Pedro the Donkey.”

“Paige WAS pregnant….none of us believed her.

We were 13 and we were just about to start S** Ed classes in a few weeks to learn about s** so we all thought she was making it up. Then she started to gain weight but she had always been kind of overweight and so no one really believed her then either.

Then she brought sonogram pictures in because she was sick of people not believing her. Most people believed her after that. Then she got taken out of school and this was back when FB was super popular and everyone was talking about her baby a few months later she had posted all these pictures.

Sorry I didn’t believe you Paige….I looked her back up when I was 15. She had a second kid.”

“A girl in my Economics Class lost her dad but a rumor started going around that he didn’t d**…he was arrested as a ser**l ki**er.

Turned out to be true and was featured a few years ago on the “Evil Lives Here” show.”

“The new teacher was rumored to be a pe**phile.

We found out it was true when he got arrested just a couple days into the second semester.”

“There were rumors that there was a network of underground tunnels that connected every building on my college campus.

Didn’t believe it til I walked through them myself.”

“We had heard an underclassman (she was 15-ish) was sleeping with a local army guy, but nobody really believed it until the day our school got locked down bc her boyfriend showed up with a knife.

The boyfriend (in his thirties) was intending to force her go get an abort**n, but our principal was a bada** who locked her in his office, then took the boyfriend DOWN and held him in a headlock until the cops arrived.”

“That the Biology teacher decided to use the scientific method to personally prove or disprove to himself that humans could photosynthesize.

He did this by laying bare a** nak** on his front lawn, landing him a public nudity charge.”

Were there any big rumors in your school that turned out to be true?