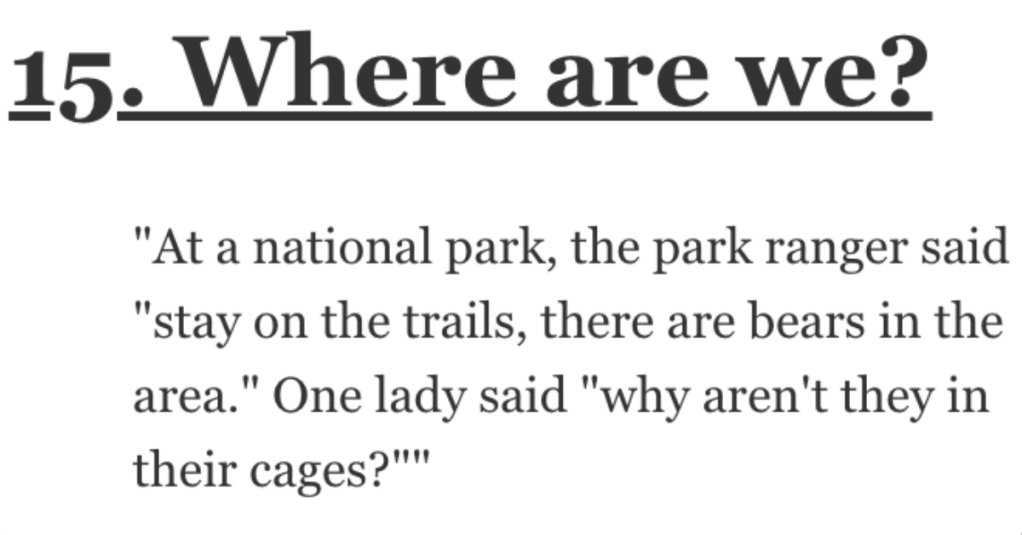 I once had a roommate who didn’t know how to make macaroni and cheese. Yes, he was an adult…

I was confused because he also wanted me to give him a lesson on how to do it. He was so blown away that I’d made this exotic dish that he just had to know how to do it!

I told him I was in a hurry and that he could just read the directions on the box to figure it out.

When did you realize someone didn’t have a clue about how the real world worked?

“Sat in on an interview with a guy who was 18 or 19. He was applying for a job because his parents were going to kick him out if he was unemployed.

That’s fine, he’s applying for entry level. When the hiring manager asked him how many hours he’d be available to work in a week he said he’d be comfortable working not more than 72 because he only wanted to work 3 days a week.

When she clarified that 72 hours is literally 3 full days he replied that he knew but in that tone that tells you internally he thought she was an idiot for asking. No big surprise but we did not hire him.

Ran into him a few years later, he worked up to be the assistant manager at the car dealship I bought my most recent vehicle from.

He remembered me and when I asked how he got the job he said he started dating a guy a while after not getting the job I’d seen him interview for that set him straight pretty quick so at least he got over it.”

“Work at a vet and a woman, late 20s owned her first puppy and we had an argument over the bill because she was sure her dog was covered under Canada’s health care system.

I said it was impressive that her dog paid his taxes.”

“One of my friends fantasized about having ten kids while also being an actress.

When I asked her about her kids, she said she’d just get a nanny to take care of them and that she didn’t need to worry because they’d still love her.

I hope she grew out of that.”

“In class years ago, we were learning about something that had to do with creating tunnels through the mountains and how dangerous and laborious it was at the time.

I don’t recall what we were learning about, but what I DO remember is this one girl raised her hand and said “Why didn’t they just move the mountains”. The entire class stared at her in silence until she realized what she said and burst into tears.

“I used to have a couple coworkers that called out regularly who complained about not having enough money.

We get paid by the hour. If you don’t work, you won’t get paid.”

“My family was visiting Arlington National Cemetery and this Karen lady on our bus asked the bus driver if “there was a place to buy snacks and drinks inside the cemetery”.

Then she got all pouty.”

“I had a friend that thought they could finish their four year degree in two years by just taking double the amount of classes per semester because “they are smart enough to”.

They are now in year five.”

“I’m a senior in highschool.

One of my 19 year olds classmates was complaining about one of our teachers because she gave a syllabus. “How am I supposed to remember to look at it?” He said. “she needs to remind us, it isnt fair.”

“Guy got hired through a community college work program. Came to work late, was reprimanded by the boss.

On break guy was complaining to the rest of us “He can’t tell me what to do!” He seemed nice so we gently explained to him that while he was clocked in and being paid, the boss could indeed tell him what to do.

Guy thought it thru, agreed with us, but was amazed at the concept. He didn’t make it.”

“I have a coworker in her 40s whose parents help support her still. She bought a new car recently and told me it was some things on her old car (a 2017) were getting old – “like the tires.”

I mentioned i needed to get a new battery for my car, and she was like “i thought only really old cars need their batteries replaced?!””

“My brother is 26 years old and has had one job (he worked there for like two months). Our cousin helped him get hired.

It was the easiest job in the world; a team of people drilled wells (agriculture) and my brother would come at night and watch the equipment. He had a new RV to sleep in. They let him watch TV, bring his dog, smoke, drink, eat whatever he wanted. The only thing he really had to do was be there. He wanted to go to dinner with his girlfriend and asked for the day off.

His boss told him no because he was the only person they had to stay there at night. He told his boss to f**k off and quit on the spot. To this day, he doesn’t work, pay bills, or do anything with his life.

He smokes weed and plays old video games (like random racing games on PS2). Sad waste of a life.”

“I worked with a girl in her 20s who had her first ever official paycheck.

She was beaming with excitement as she opened the envelope, smile drops and she says, “Wait…what are these lines?”

She had no idea what taxes were. We’re taxed to work, to simply live somewhere, to buy things, to sell things, to flush things.

Welcome to poverty, young girl in a low-paying career.”

“Had a friend who was in some uncredited scam online college for her master’s degree in medical billing or some dumb s**t.

She was on a loan program that was sending her about $5k every 3 months directly to her via check in the mail.

This was her only source of income. She kept calling it a grant that didn’t need to be paid back. She was flat broke as a joke for 2 months but then the check would come in and she would be living the good life for a few weeks before being poor again.

We tried to do an intervention and show her the insane interest rate that would be back dated as soon as her “school” was done but she didn’t want anyone to bust her free money dreams.

She just kept talking about all the money she would eventually be making billing insurance companies…turns out she wasn’t even logging in to the online college or even attempting to get this degree.

She thought the money was free, the degree was automatic and the job was guaranteed. Some people are beyond help.”

“A student working part time at my laboratory at a University came into my office and asked “so what all can I eat in the refrigerator, I didn’t know I was supposed to bring my own lunch”.

I looked at him, stunned and replied “nothing, that food is what people brought for their own lunch, but you can use my grub hub to order”. He DID NOT UNDERSTAND. It took 4 tries to get him to realize he can’t just eat someone else’s lunch.

Same student: I walked into the lab room and told him I made a full pot of coffee in the office and he could help himself. Him: “a pot of coffee? What’s that?” He never used a coffee maker other than a Kuerig before and didn’t even know it was a thing.

He was fired a month later for stealing chloroform.”

“At a national park, the park ranger said “stay on the trails, there are bears in the area.

” One lady said “why aren’t they in their cages?”

It turned out the woman (42) was driving for 7 months with the hand brake on the whole time.”175. Spoiled.

“A dude (18 yo) in boot camp got a letter from home and I can see he is agitated. Being 22 and concerned for his well-being, I asked him if he wanted to talk about it. (I’m thinking a Dear John letter or the Mom and Dad divorcing letter.)

He told me that his younger brother got a Mercedes for his birthday and that he was pi**ed because he “only got a BMW”. Can’t remember what I said, but I knew boot camp was gonna knock his d**k in the dirt. (It did.)”

“When I was in boot camp, some kid put “Mom” on an envelope with a letter inside with no address attatched.”

“My boss told me about a friend of his, who told him about a “life hack”.

She would get her bills in the mail, NOT pay them, and then wait a couple of months to pay. Then she would cry so the debt collectors would feel bad and waive the fees for not paying on time.

That was her “brilliant life hack”.”

“The other day, my 18yo brother-in-law got married to his high school sweetheart in a parking garage so that they can live off campus at college together.

Girlfriend’s, now wife, mother is an ordained minister. His parents, my in-laws, were very upset and he couldn’t understand why because “it’s just a fake marriage for school”.

Oh no, sweet boy. You are MARRIED. I just laughed and laughed. I love him dearly. He is a dumba**.”

“When looking for somewhere to rent after university halls, one of my mates was annoyed because he didn’t like the lounge in the house his parents BOUGHT HIM OUTRIGHT to live in.”

“I worked for a very sheltered and entitled Mother as a nanny.

Shortly after I got hired she called me at 3 am asking me to come in because the baby wouldn’t stop crying. When I said no, she responded with “but you’re the nanny!”.

And that was a constant thing. At one point she got sick of breastfeeding and asked if I could start nursing. All of this was very casual too. Like she wasn’t really mean about it.”

“A first year college student of mine thought that assignment deadlines were guidelines. Nothing was handed in on time.

She emailed me the night before her final exam to see if I’d take some of her late work. I told her hell no. She threatened to report me. I let her.

She failed, got reprimanded and was eventually expelled due to plagiarism.”

“One of my roommates. A 23 year old who is quite literally unable to take care of herself in any capacity beyond ordering fast food.

I once heard her yell at her mother because she was filling out a job application and got stuck on a section. Her mom was trying to help her finish but she got frustrated and screamed, “Can’t you just fill it out? I want to go play my games.”

Before you ask, no. There are no disabilities. She’s just lazy, spoiled and incredibly stupid.”