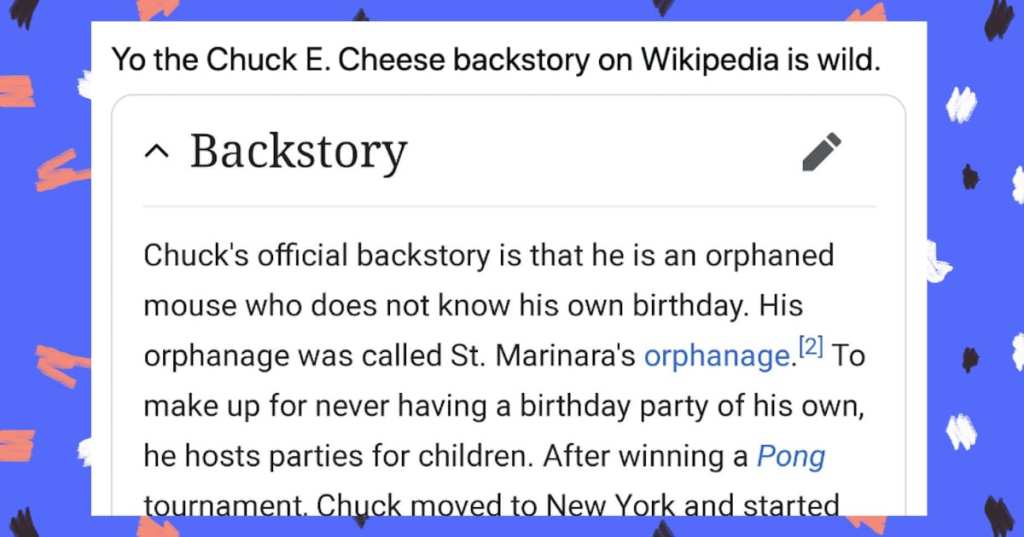 Remember Chuck E. Cheese? 15 Tweets That Bring Back ALL the Nostalgia!

Also, now that you’re an adult, the shine has definitely worn off, right? The place is dirty, there are definitely germs everywhere, and just thinking about the ball pit makes me want to gag.

That said, these 15 tweets might just take you back to the good ol’ days when it was the place to be – the stuff birthday party dreams were made of – and if you ask me, a little nostalgia is never a bad thing.

15. Huh. I never really thought about it that way.

Where can a kid not be a kid?

Chuck E. Cheese commercial: Where a kid can be a kid!

13. No one was going near that stage.

They might be alive. You never know for sure.

But honestly…it doesn’t sound like a bad way to pass a Saturday afternoon.

Hi, welcome to Chuck E. Cheese.
Everything is visibly dirty and our mascot is a rat, eat some pizza near a sneezing child.

Come on down for some rat pizza at our child casino.

Anyone who was weaned on the original Chuck E. Cheese is stone cold.

You think you can scare me? My first job was at Chuck E Cheese. The ball pit changes you.

Our parents were like, “eh, sure. Why the hell not?”

I liked Chuck E. Cheese better when he looked like he might microphone-whip a kid at any goddamn moment and then put out his cigar on their dad. pic.twitter.com/dhp3c3ctpf

9. I’m sure there was a subconscious reason.

8. Did someone just…make all of this up?

Because I have some followup questions.

Yo the Chuck E. Cheese backstory on Wikipedia is wild. pic.twitter.com/iUEx5Gmako

7. Which is really a shame.

4yrs ago today I had a 6ft mouse in a headlock, and till this day you still cannot bring alcohol into Chuck E. Cheese.

Do not, under any circumstances, eat off the floor of a Chuck E. Cheese unless you’re trying to get superpowers. Or kill yourself.

My life can be hard, but obviously not as hard as the dad who just yelled, "FIVE SECOND RULE!" in this Chuck E. Cheese.

Live a little! Dance with meningitis!

Date: You said we were going to an Italian restaurant with live music.

Me: *holding open the door to the Chuck E. Cheese* We are.

I honestly have no recollection.

ordering chuck e. cheese pizza on seamless is the most chaotic thing i can imagine pic.twitter.com/XtTKrg8yYw

At least the skeeball wasn’t broken. That would have been the real day the music died.

"Their lifeless eyes failed to conceal a profound sadness. Terrifying that even an animatronic band seemed to grasp the cruelty of being forced to portray life while not being granted it. Also the air hockey table was broken."

2. Me yelling at every band, to be honest.

Why do they think we’re still buying their records?

PLAY THE HITS, NO ONE IS HERE FOR YOUR NEW STUFF!!

-Me, drunk, yelling at the Chuck E. Cheese band.

1. I have no idea what I just watched.

But I am in no way mad about it.

5 year old at his birthday party: "where is the chuck e cheese mascot?"

Ahhhh I can almost smell the pizza and see the creepy animatronics now.

Did you have a birthday party at Chuck E. Cheese? Was it the best? Tell us about it in the comments!