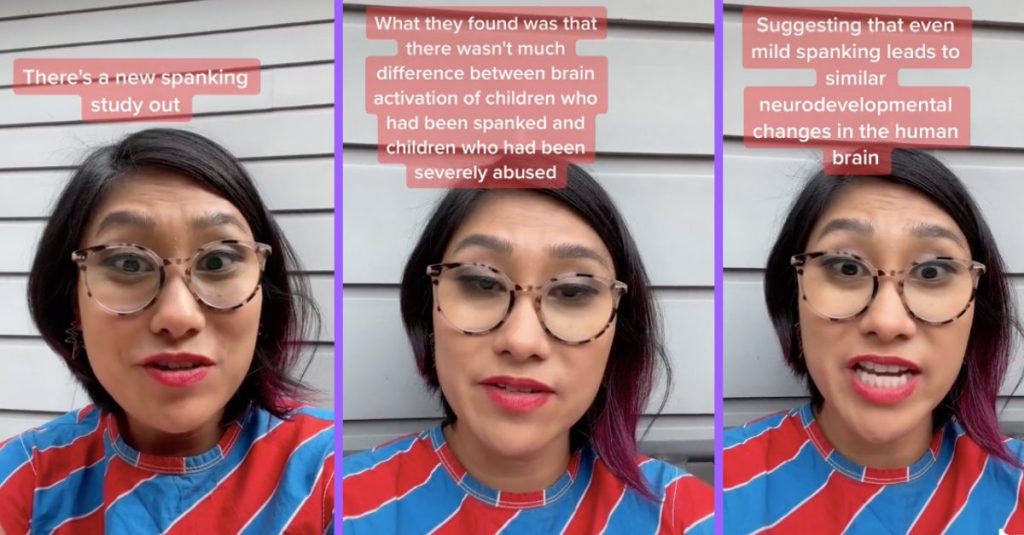 Everyone has an opinion on spanking children as a form of discipline.

In America, there will probably never be consensus.

People are willing to die on both sides of that hill.

Recently, a new study on the subject was released by a Harvard team, and Austin based psychologist Dr. Han Ren took to TikTok to explain their findings

TW: spanking. This is a hill I will die on. #parenting #childdevelopment

They showed pictures of different kinds of faces to school-aged children in 2 categories: those who were never spanked and those who had been spanked in their early years.

By comparing their brain reactivity to known reactivity of severely abused children, they concluded that both mild spanking and traumatic abuse cause the same changes in brain development.

“Those consequences potentially affect the brain in areas often engaged in emotional regulation and threat detection, so that children can respond quickly to threats in the environment.

Preschool and school age children — and even adults — [who have been] spanked are more likely to develop anxiety and depression disorders or have more difficulties engaging positively in schools and skills of regulation, which we know are necessary to be successful in educational settings.”

So spanking children when they are young can set them up for a lifetime of struggle, particularly in school and even workplace training.

Users asked about the demographics of the children involved in the study, so Dr. Ren made a follow-up video, explaining they were about 66% white, which was representative of the population.

Dr. Ren first got involved with TikTok during the pandemic.

As she told Bored Panda:

“I noticed there was a growing interest in mental health and therapist creators on the platform and thought ‘I could do that!’

I also noticed the lack of diversity in popular creators and the dearth of content specifically centering BIPOC individuals speaking to the complexities of mental health within our cultures.

I decided to take a stab at it and my platform grew pretty quickly!”

And her comments section make it pretty clear that her followers value that perspective.

The level of discourse was more elevated than you might expect to find in the comments section of a potentially inflammatory topic.

Users asked more specific questions about cultural differences in research, to which Dr. Ren responded with another follow-up video:

Here, she explained that studies show that some of the negative effects of spanking might be mitigated due to cultural prevalence, however depression and anxiety are still greatly impacted. Maybe this explains why it remains prevalent in certain regions, like the South.

Dr. Ren continued to argue that there are better and more effective ways to discipline children, but surprisingly, she has not done a video on those alternatives yet. She did, however, respond to specific questions in her comments with advice for dealing with certain types of behavioral issues such as biting.

It’s a conversation that seems like it will never go away, but it’s good that we keep having it because it’s such an important issue.

What do you think of her take on the new study? Tell us in the comments.