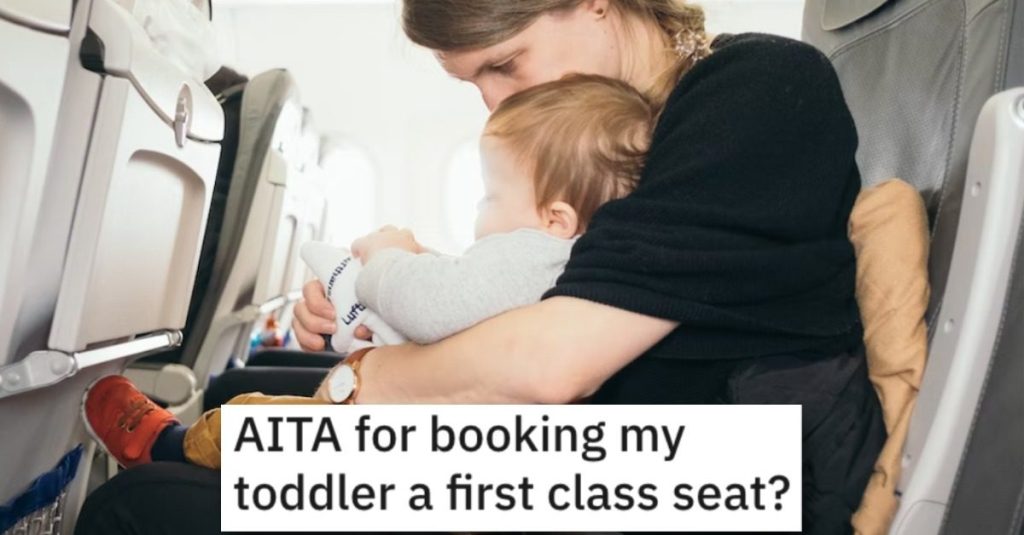 She Booked Her Toddler a First Class Seat on a Plane. Is She a Jerk?

Should kids have first-class seats on planes?

I’ve never really considered that question before, but if a family is flying together and they’re forking over the cash, then I guess that’s their business, right?

Well, it seems like someone had a problem with this woman buying her toddler a first-class seat on a cross-country flight.

So was she wrong?

Let’s get all the details in the story below.

AITA for booking my toddler a first-class seat?

“My husband, toddler (almost 3) and I were flying across the country for Thanksgiving. Since we could afford it due to a nice pay raise my husband recently got, we decided to splurge on 1st class tickets for the trip.

Disclaimer: My toddler has always been a good flyer and has flown a lot throughout her short life. We follow our pediatrician recommendation to give her a dose of baby Tylenol and gripe water 30 minutes before travel and she’s never been disruptive or cried on an airplane, this flight included.

She’s good at staying in her seat and tells us when she a needs to go potty, food, a toy, etc. She stayed seated and quietly playing throughout the flight, only getting up when she had to go potty.

The issue was with another 1st class passenger. We boarded early since my husband is disabled and when another 1st class passenger saw us he started glaring. Shortly after he sat down a flight attendant came up and asked to see our boarding passes to make sure we were seated correctly. We showed her our boarding passes and she was like “cool, yall are good”.

A few minutes later a second flight attendant came up and asked again to see our boarding passes. We showed them and again she was like “cool yall are good”. We take off and all is good. My kid fell asleep in the middle of coloring, husband is snoozing, I’m listening to music when I get a tap on my shoulder.

It was the guy that glared at us as he boarded and before I could even get a word out he told me that children weren’t allowed in 1st class and that we needed to move to our “real” seats. I realized he was probably the person that complained before takeoff that we were in the wrong seats and decided before I got upset I wanted the flight attendants to deal with this.

I told him that I did not feel comfortable talking with him and that I was calling a flight attendant to come handle this. He got flustered but ultimately stood awkwardly next to me in the aisle until a flight attendant came to clear things up.

The flight attendant came and explained to him that we were in the correct seats that we paid for and asked that he sit back down and not bother us again. He did go back to his seat but as we were getting off the plane he whispered to me that I was a “fat cunt” and that he pays too much money for first class to be surrounded by children.

My kid was the only kid in 1st class and she didn’t misbehave or even cry so at first I felt like I was in the right, but after talking to family at Thanksgiving many of them told me that we should book economy next time because people pay extra to relax in 1st class.

Are we really a**holes for flying 1st class with our toddler?”

One reader said she’s NTA and since she paid for those seats, she’s entitled to them. 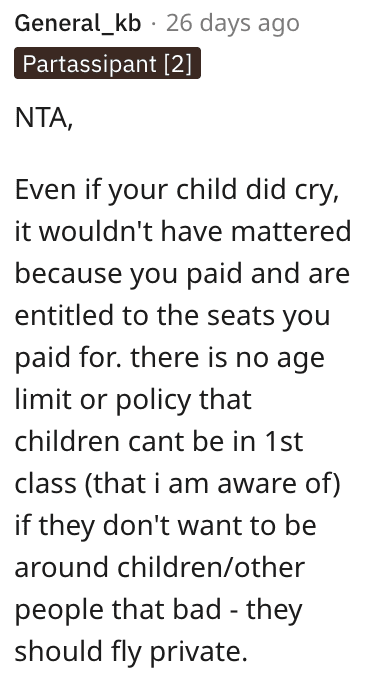 Another individual said she’s NTA and you have to deal with things when you fly, plain and simple.

Another Reddit user also said she’s NTA and that this guy should have just calmed down. 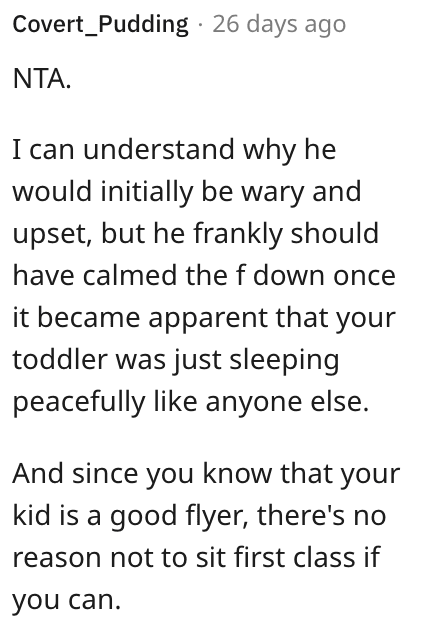