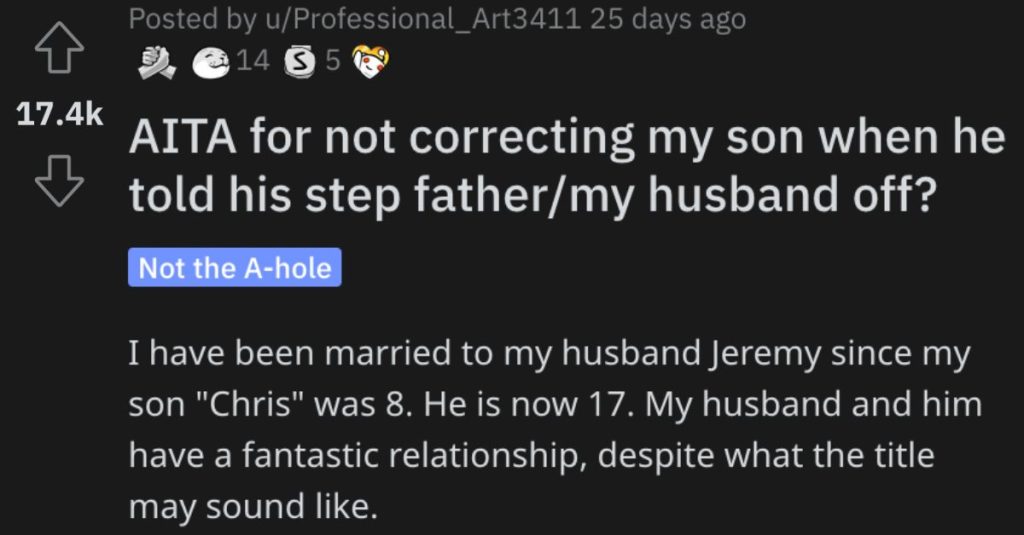 She Didn’t Correct Her Son for Telling His Stepfather Off. Was She Wrong?

Sounds like she just let this one slide, huh…?

Hmmmm, this doesn’t sound good, does it?

Let’s dive into this story from the “Am I the A**hole?” page on Reddit to see why this woman didn’t correct her son for what he said to her husband…and whether or not she’s an a**hole…

AITA for not correcting my son when he told his step father/my husband off?

“I have been married to my husband Jeremy since my son “Chris” was 8. He is now 17. My husband and him have a fantastic relationship, despite what the title may sound like.

My birthday is in 2 weeks and I honestly haven’t put much thought into it. My husband is not a gift giver. He says he has a hard time figuring out what to get and doesn’t want to waste money on something that people won’t use. He is also a practical person, whereas I’m by far the sentimental type.

So even when he does get me something, it’s something I can use every day. Which, no big deal obviously, but I’ve requested some sentimental pieces and he just never gets them. So I pretty much gave up on ever asking for anything and it did really bother me for a number of years but it truly doesn’t bother me now usually.

Well, my son graduated a year early and doesn’t start college until next year. So currently he works 2 jobs (his choice). I’ve asked him to cut back and enjoy his teen years before adulthood but working just makes him happy. So he works at a mechanic shop and a junk yard.

Most of his buddies work there too so at least he is getting in time with friends. Well my husband h**es spending money and tries inflicting that on us. He lives as frugally as physically possible and saves every single dime that he can. He could retire right this second and wouldn’t be able to go through all the money he has saved.

My son comes home last night with 3 of his buddies that work with him and he’s like “I know it’s not for 2 more weeks but I cant wait for you to open this, so please open it now.” Him and his buddies are snickering about it so I thought it would be some gag gift but much to my surprise, it was a huge, absolutely gorgeous wall piece that has photo frames AND shelves built in.

My husband immediately was like “Wow, how much did that cost? That could have went into a IRA Ros account” (idk if I said that right). My son immediately shots cold daggers at my husband and says “Its truly none of your business what I do with my money and since you outright refuse to buy my mother nice things that she absolutely deserves, I will make sure she gets something nice.

And for the record, we made this ourselves. Didn’t cost us anything.” My husband just stops talking, looks at me waiting for me to say something and when I dont he shakes his head and walks off. After the boys leave he says I allowed Chris to embarrass him in front of other people and I should have said something. I simply told him that Chris was right.

This reader said she’s NTA and that her husband embarrassed himself. 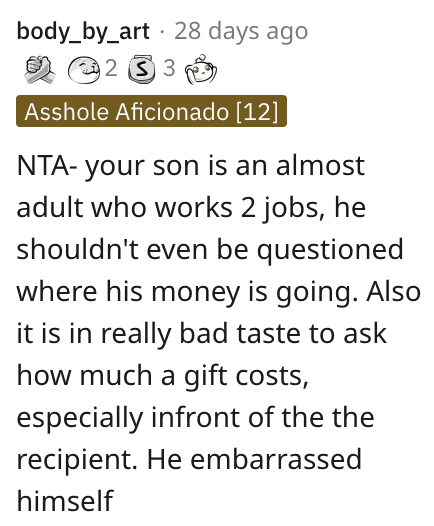 Another individual said that her son sounds like a great person. 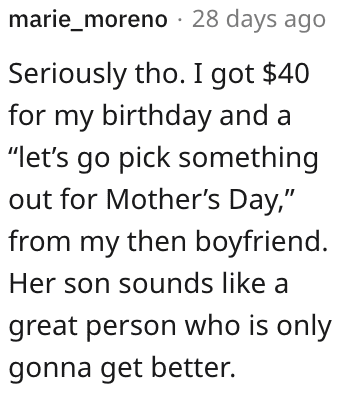 And this Reddit user said not only is her son is a good guy, but so are his friends. 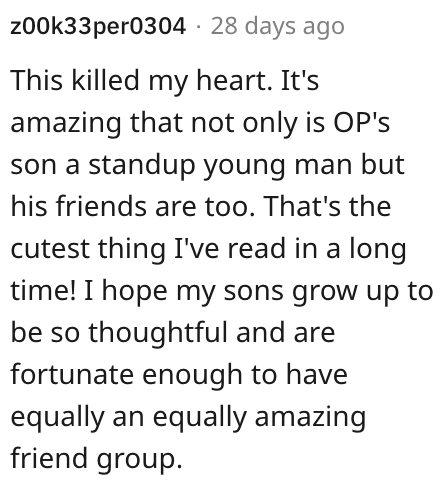