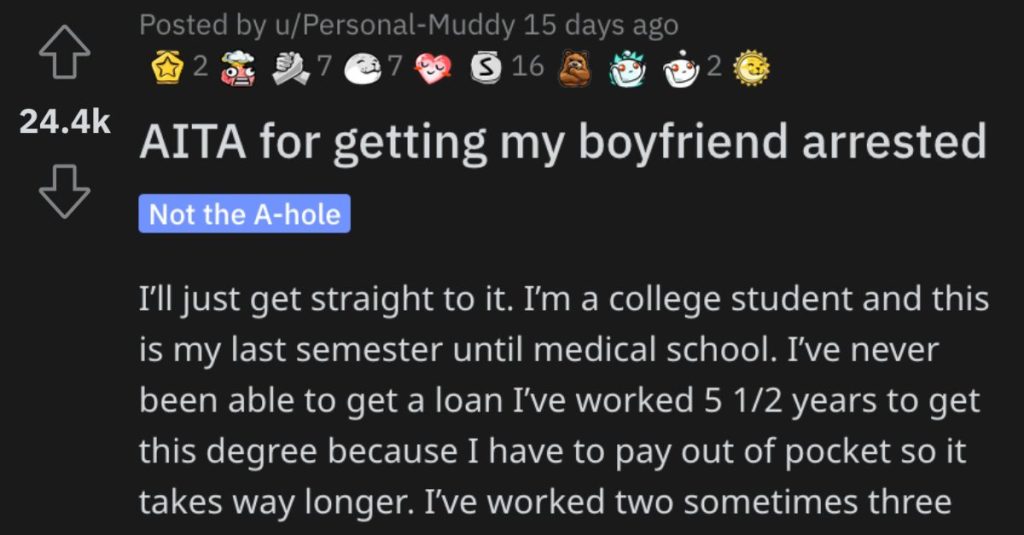 She Got Her Boyfriend Arrested. Did She Go Too Far?

And that’s why we need to read this whole post from Reddit’s “Am I the A**hole?” page to see if this woman went too far.

Let’s jump in and see what went down here…

AITA for getting my boyfriend arrested?

“I’ll just get straight to it. I’m a college student and this is my last semester until medical school. I’ve never been able to get a loan I’ve worked 5 1/2 years to get this degree because I have to pay out of pocket so it takes way longer.

I’ve worked two sometimes three jobs at a time and barely had a social life. For this upcoming semester I reached my goal for tuition so I quit one of my jobs so I could relax a bit. I was a server/bartender at two bars and an office job so I always have cash hidden in my apartment in my closet in box and before the semester starts a week or two before I deposit it so I can pay my tuition.

My boyfriend sometimes stays over while I’m there or when I’m not. Since I’ve been saving for this semester he’s the only one who’s been over I’ve never told him about the box but he knows I have to pay for school. Well yesterday night I get home to put money in the box because I was gonna deposit it today and it’s all gone. I freaked out and tore my apartment up thinking I put it somewhere else knowing I didn’t.

I called my boyfriend like crazy no answer. I didn’t sleep last night I was panicking. Then this morning he finally calls me back I’m yelling at him about my money he’s acting all confused and like I’m crazy. He comes over I’m still p**sed off after a while he finally admits he took it so he can borrow and he’ll pay me back. Where tf is he gonna get $14,000 from in two weeks?!

I went into a rage and called the police and reported a theft because that is what he did. Well it’s been hours now I guess he got his phone call because his family has been blowing my phone up and his mother has said some really hurtful and racist things to me. They’ve been harassing me for the past 6 hours now it’s stressing me out even more and I h**e that I’m feeling bad for him but he stole my money that I’ve been saving for months.

His brother did call and he was respectful and said they’ll help him pay it back and I should just go to the police station with him and tell them I want to drop the charges but I really don’t believe them. I could do that and never get my money back still. I don’t know what to do and I h**e that I’m contemplating doing this. I’m just really p**sed off and have been crying all f**king day.”

This person said she should absolutely NOT drop the charges. 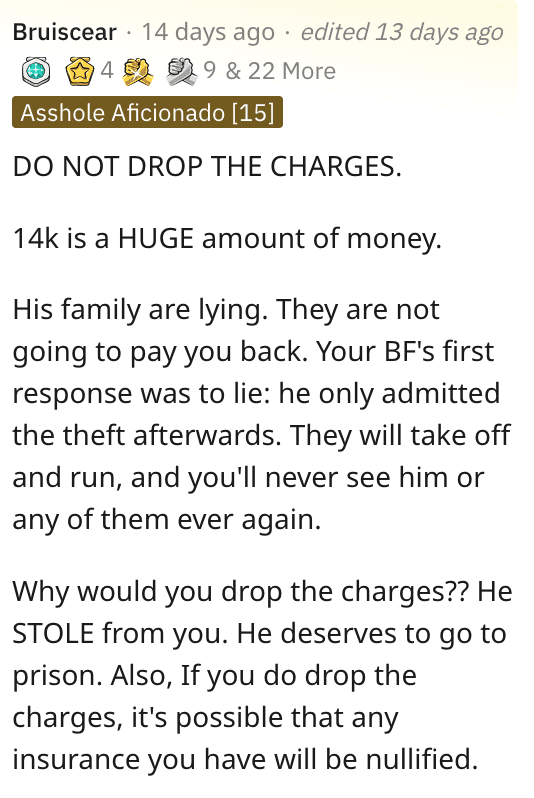 And this individual said she should not be keeping this kind of cash in her house. 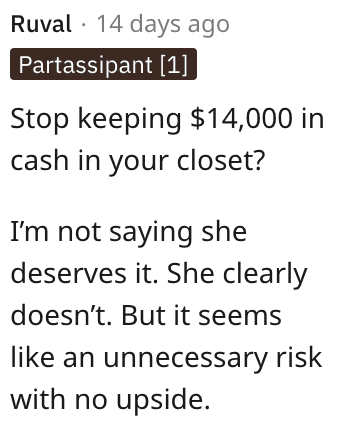 And another Reddit user said this guy was arrested because of what HE did, not because SHE reported him. 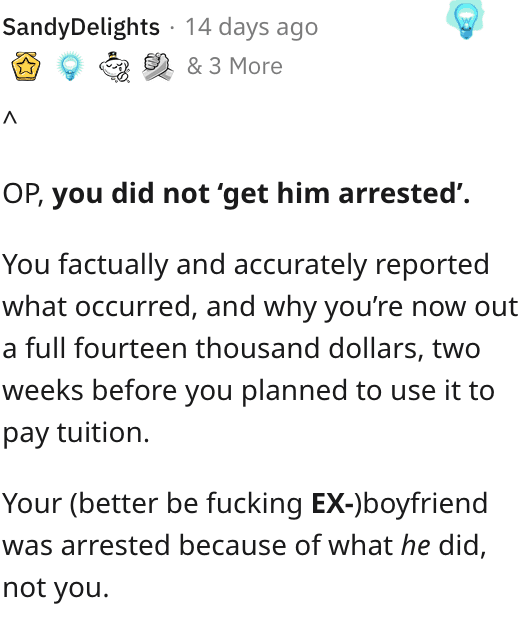