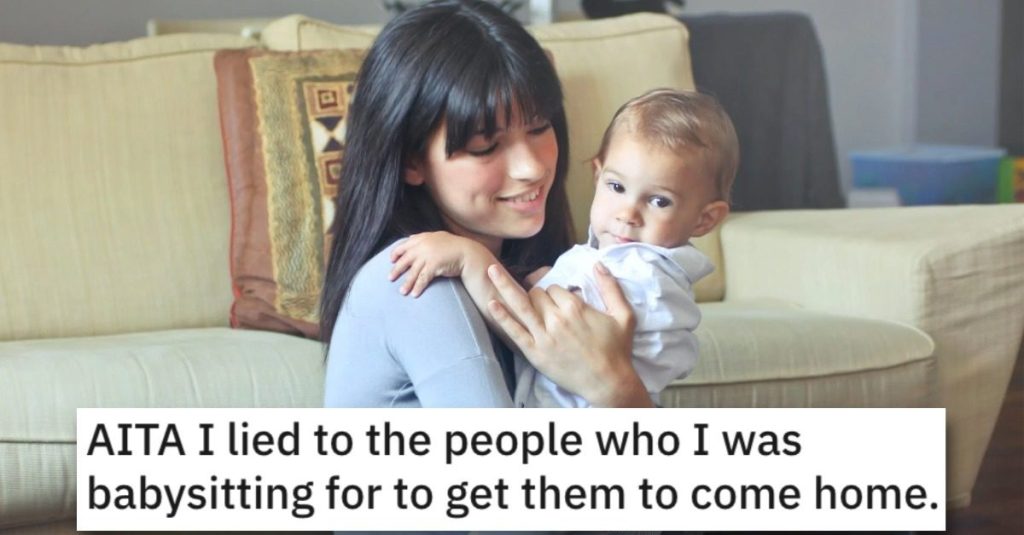 She Lied to the People She Was Babysitting for to Get Them to Come Home Early. Was She Out of Line?

Being a babysitter when you’re a teenager sounds pretty stressful.

You’re dealing with other peoples’ kids, you’re in their house, and there’s no telling what could potentially go wrong.

Which brings us to today’s story from Reddit’s “Am I the A**hole?” page.

Check out what this teen had to say and let us know if you think she acted like an a**hole.

AITA I lied to the people who I was babysitting for to get them to come home?

“I am 15 years old and I babysit to make money. I took a first aid course and a babysitting course.

Lat weekend one of my little sister’s classmates parents had a wedding to go to and asked if I would babysit. I asked how late they would need me and if I should pack an overnight bag if they were going to be staying out all night. They said that they would be home by midnight. So I checked with my dad if that was okay because he is my ride. He doesn’t want me alone in a car with adults that he does not know.

12:30 they still aren’t there. I texted again. No answer. I called my dad and he is p**sed. Not at me. One o’clock. I call them. No answer. My dad went and got a coffee at home and came back. He is all calm. Not good. He is ready to blow.

I texted every 15 minutes. No response.

2:20 I have an idea. I texted them that someone tried to break into their garage but that the alarm scared them away.

They were home drunk in an Uber in 15 minutes. My dad made their pay me for my extra time before we left. He told me that I’m not allowed to babysit for them again unless I charged them for an overnight stay.

Yesterday at school I saw the mom when I was picking up my sister’s after school.

She gave me s**t for scaring her and her husband. That they had checked their security cameras and no one tried to break in. I said sorry the alarm went off so I called you.

She called me a liar. Which is fair. But I don’t feel bad about what I did. They lied to me first.

My mom says I should have just sucked it up but my dad says that they broke our deal.

I kind of feel bad for tricking them into coming home from their party. But they could have told me it was an overnight or texted me that they were going to be late. My dad has brought me an overnight bag before when that has happened.”

This person said she’s NTA and that these parents treated her badly. 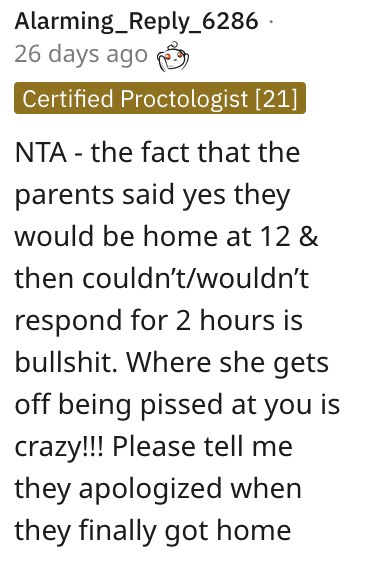 Another reader offered up some advice about what she should do if this happens again.

And this individual said she’s NTA and said they wasted her time.