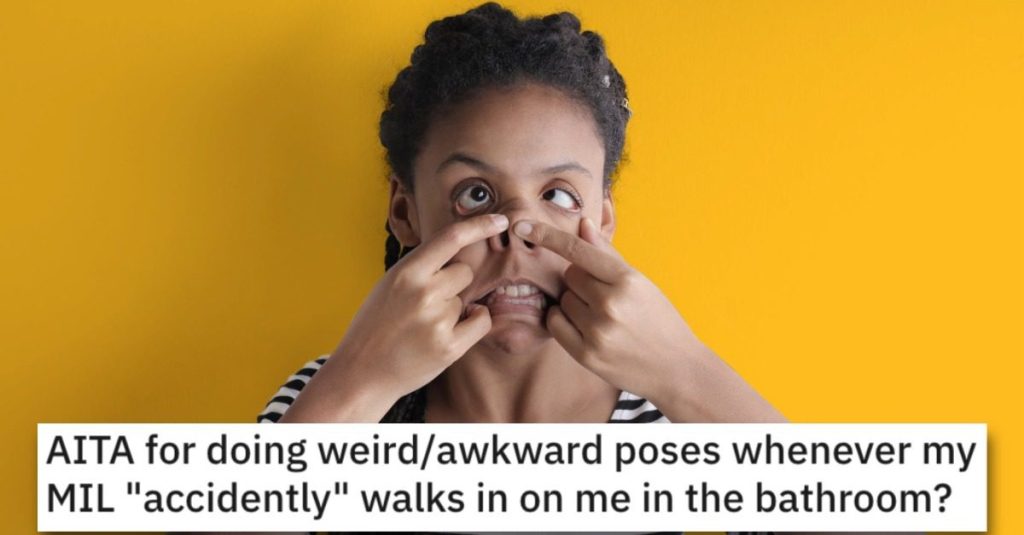 She Poses Weirdly When Her Mother-In-Law Barges Into the Bathroom. Is She a Jerk?

If you barge in, I’m gonna make you uncomfortable.

That seems to be the thought process of the woman behind this bizarre story from Reddit’s “Am I the A**hole?” page.

Read her story below and see what you think.

AITA for doing weird/awkward poses whenever my MIL “accidently” walks in on me in the bathroom?

“So, my MIL (I’m a gal btw lol) came to stay with us for few weeks til her home is renovated for christmas.

The problem is that she has been randomly walking in on me while I’m in the bathroom. Thankfully not once has she seen me naked because I started picking up on her behavior after the second time in a week.

She’d barge in, then turns and says “oh sorry” then close the door. I tried talking to my husband about it but he kept ignoring me then flatout said “so what if she accidently seen you naked? She’s faaaammmillly!!”. He seriously said that!.

We have a lock and I could’ve used it but I have past trauma from the idea of locking/being locked in a room after my brother locked me in the bathroom when I was 5.

So I came up with this idea. I’d go inside the bathroom pretending to use it and wait for her to come (cause honestly? It’s deliberate at the this point). When she “accidently” barges in she’d see me in a weird/awkward position. For example doing a ballet stand, standing on the toilet, or standing facing the wall with my hands up, (fully clothed of course).

I could see how awkward and weird this would be for her because she’d stand there for few seconds trying to figure out what I was doing. It was halirious at first seeing her initial confusion but she told my husband about it claiming “she’s caught me practicing rituals in the bathroom”.

I cleared things up and revealed the reason why. My husband was livid. He called me childish and said that I made his mom feel “terrified/weirded out” by my behavior. He said I should’ve acted maturely and locked the d**n door instead of playing mind games.”

Now it’s time to see what Reddit users think about this.

This reader said she’s NTA and they think this is funny. 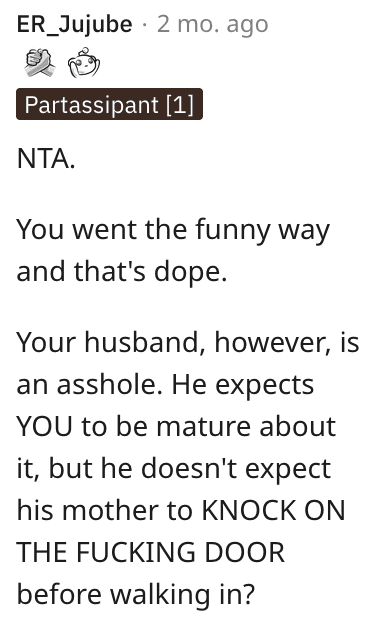 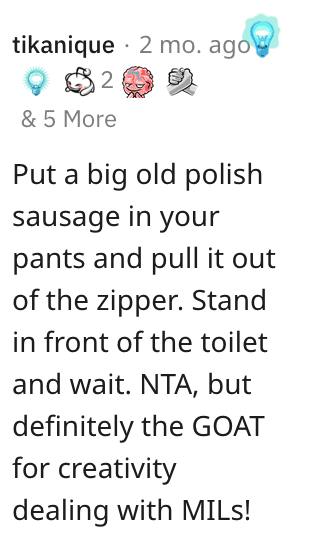 And this Reddit user said she’s NTA and they hope her MIL learned a lesson. 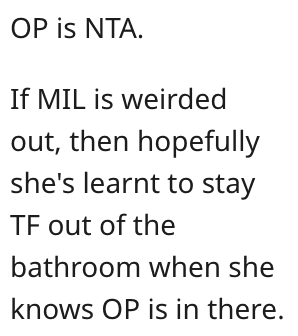