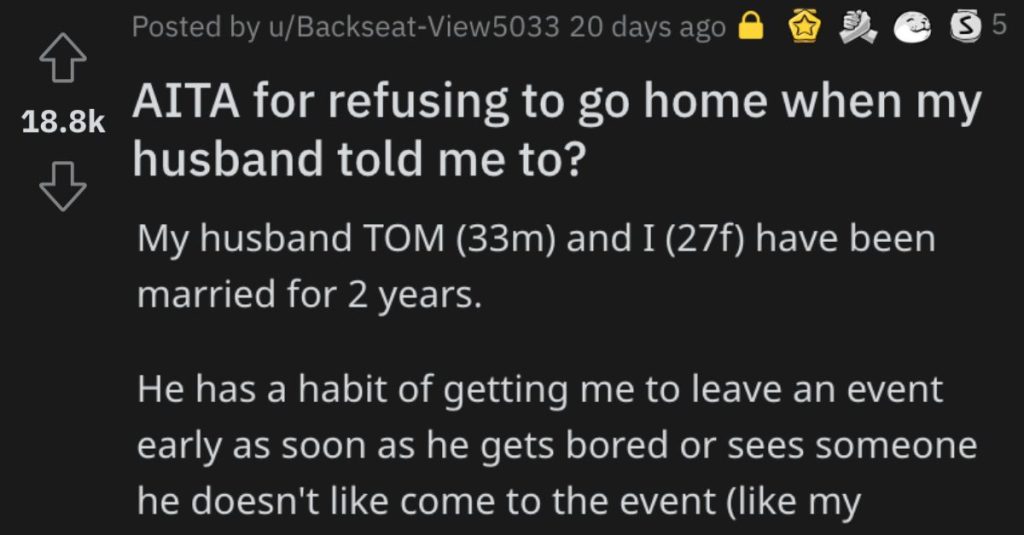 She Refused to Leave a Birthday Party When Her Husband Told Her To. Was She Wrong?

I’ve never been a big fan of having a girlfriend or even a friend who pulls the “it’s time to leave” game when we’re at a party or an event.

It drives me nuts!

And it sounds like this woman has had just about enough of it, too…

Read on to see what happened with her in this story from Reddit’s “Am I the A**hole?” page.

AITA for refusing to go home when my husband told me to?

He has a habit of getting me to leave an event early as soon as he gets bored or sees someone he doesn’t like come to the event (like my brother). He doesn’t outright say it but pretends to get sick (feel headache or stomach) and force me to go home with him. Soon as we leave he’d immediately go back to normal and suddenly all the pain and headache go away.

He then admitted it’s a “strategy” to get out of boring/undesired events. Thing is this has been happening way too often and I keep falling for it. more importantly….it has impacted my relationship with family and friends.

I told him many times that he could go home by himself if he doesn’t feel comfortable at an event and not trick me into going home with him. he told me that I had to leave with him otherwise people would ask how he could drive while sick. I told him it’s not my problem and next time he does this I won’t just play along. He smirked at me and we stopped bringing it up.

2 days ago was my sister’s 18th birthday. It was obviously a huge event since she’s the youngest in the family. Tom first said he wouldn’t go then asked me to not go as well because he was “feeling sick” sick from what? didn’t specify. I said no and gave him the option to stay home but he got dressed last minute and went with me.

We got there, I went to stay with my parents and saw my sister. about 15 mins later, Tom came up to me saying he was feeling nauseous and told me to go home with him because he was feeling sick. I figured he just got bored and was pretending to be sick to get me to go home with him just cause he didn’t like the party. I told him “No” and that he needed to stop these games cause this was my sister’s birthday.

He swore he was sick but I refused to go. he then gave me a nasty stare then at dinner we all sat down to eat but he didn’t. he kept staring then started moving in his chair and few minutes later he dropped down and started throwing up near the chair. Everyone got up from their seats and dad went to help him up immediately.

I couldn’t believe it I just stood there as mom and dad helped him up while he shouted “SHE KNEW I WAS SICK, I TOLD HER I WAS SICK AND NEEDED TO GO HOME BUT SHE JUST WOULDN’T BELIEVE ME” everyone heard this and stared at me. I felt guilt, shame, embarrassment…especially with how my dad looked at me to confirm this statement. It was horrible!!!! Dinner was cut short and I had to drive him home.

I got berated by both my family and him and they called me neglectful and with no empathy to refuse to listen when he told me he was sick. He’s been upset with me about what happened and refused to even talk except to say it was my fault the party was ruined for everyone. I can’t even talk about what my sister thinks of this since this was her party.

Was I really the AH in this situation?”

One reader said she was NTA and that her husband sounds like he is manipulative and controlling.

Another Reddit user said this is a huge red flag and this is not normal.

And this individual said she needs to stop going to events with him. 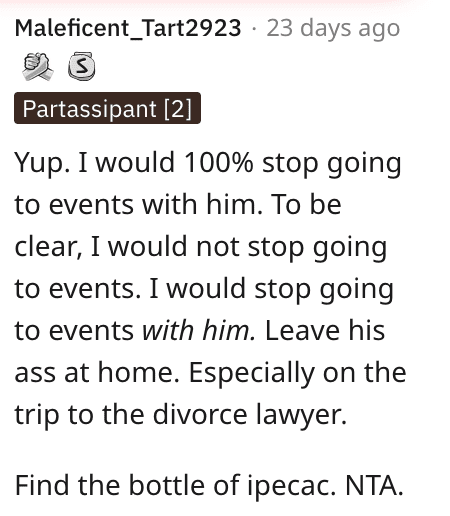