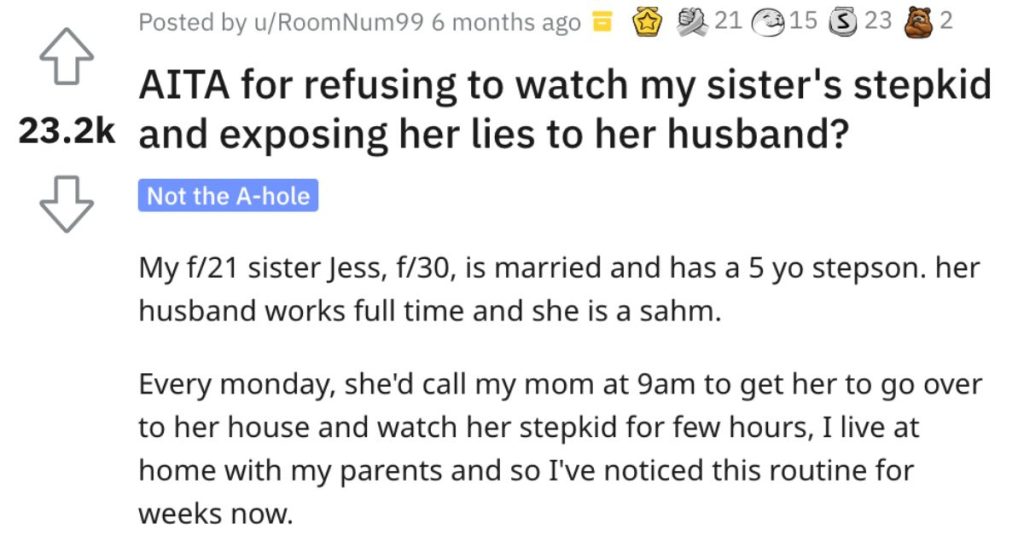 She Refused to Watch Her Sister’s Stepkid and Exposed Her Lies. Is She Wrong?

Kids today, I tell ya…

They’re wild and definitely unpredictable…or, at least it seems that way from this post that a woman shared on Reddit’s “Am I the A**hole?” page…

Read on to see if this woman was wrong for what transpired with her sister and her stepson.

AITA for refusing to watch my sister’s stepkid and exposing her lies to her husband?

Every monday, she’d call my mom at 9am to get her to go over to her house and watch her step kid for few hours, I live at home with my parents and so I’ve noticed this routine for weeks now.

Last week mom went out of town to visit some relatives, and yesterday (monday) at 9am my sister called asking me to come watch her step kid for few hours because she had an important thing to do.

I said no because I had to go study and also she does this every monday so clearly it wasn’t important or urgent but she insisted it was, I told her sorry but no. She ended the call then I went to the university.

Hours later, I got a call from my brother in law asking where my sister was, I said I had no idea. he proceeded to tell me he just came home at 1pm and found his son by himself at the house. I was in shock that my sister left her step kid by himself so she could go God knows where. I told him about the conversation I had with her and he got angry.

In the evening my sister came over and started making a scene by yelling at me for bailing on her after she sent me a text message telling me she was already out the house to force me to come watch her stepson.

I didn’t see the fb message til she told me but she said I did this deliberately and also, exposed her to her husband because she told him she’d be at home with the kid. Not just that, but I also told her husband that mom comes over every monday morning to watch the kid for few hours which caused a huge fight between him and my sister.

She yelled that I was petty and selfish and just stirred s**t and caused issues in her marriage by tattling to her husband. I couldn’t keep arguing I went into my room and started playing music. My dad and the others said I was to blame for not helping my sister and now being the reason she and her husband are in conflict.

One reader said she’s NTA and asked a good question… 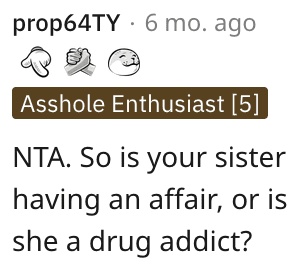 And this Reddit user said there is NO reason to leave a 5-year-old kid home alone. 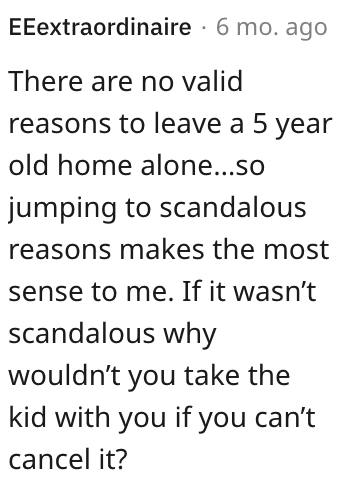 Another individual said she’s NTA and that they hope the sister’s husband questions her about what’s really going on. 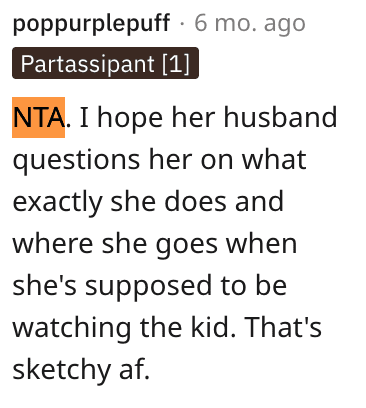