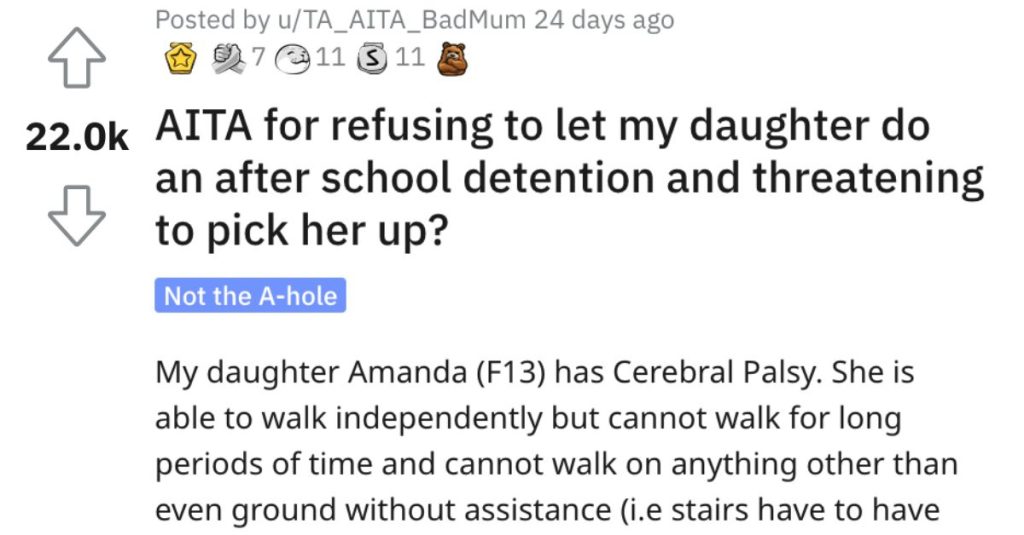 She Refuses to Let Her Daughter Do After-School Detention. Is She Wrong?

A woman asked the readers on Reddit’s “Am I the A**hole?” page if she was out of line for how she is reacting to an incident with her teenage daughter who has Cerebral Palsy.

Take a look at what happened and we hope to hear from you in the comments.

AITA for refusing to let my daughter do an after school detention and threatening to pick her up?

She is able to walk independently but cannot walk for long periods of time and cannot walk on anything other than even ground without assistance (i.e stairs have to have rails, can’t walk on rocks/sand/etc).

She has an IEP for this – that states what she can and cannot do in PE, excursions, etc. It’s relevant to note that Amanda catches the bus home – but can only catch a specific route as the other route the school offers drops her off at a road about a mile away that has no footpath.

I got a call at work at 11am today telling me that Amanda had spoken quite rudely to a substitute PE (gym) teacher who tried to make her climb the rock wall that her school has. Apparently Amanda did say “I can’t, I have Cerebral Palsy and I have an IEP” but when another child said “Yeah! Same here!” the teacher didn’t believe her and became insistent – standing over her so Amanda told him to “f**k off” and wouldn’t repeat anything but “f**k off” until she was sent to the office.

It is in the handbook that this type of offence is a same day after school detention. But when the Principal called me I said “absolutely not”. I told them that they were welcome to do a weeks worth of lunch detentions, or even schedule it so that I can change my work schedule – but absolutely not this afternoon.

My husband is away for work, I have to work until 6pm and I need Amanda to be on her regular bus because I have nobody who can drop her off home at 4:30 when detention finishes. They told me about the “late” bus and I reminded them why Amanda couldn’t take that bus and was told “well, sounds like a natural consequence to me”.

This isn’t your average kid refusing to do something, being rude and deserving a long walk home as well as detention. This is a kid that could be seriously harmed if she was made to walk that far and on that road.

The Principal told me that I was “making excuses” and that Amanda needed to face consequences and I didn’t technically need to give permission – they were making me aware.

I agree that Amanda needs to face consequences for her language (which are that she’s grounded for the weekend, and has to serve any lunch detention the school gives her and apologising to the teacher for specifically her language – nothing else) – but putting her in danger is NOT right and that if they were insistent on this – I was insistent on taking my lunch break right now to drive over and pull her out for the rest of the day.

This reader said they are proud of how the daughter acted and she was right for standing up to this teacher. 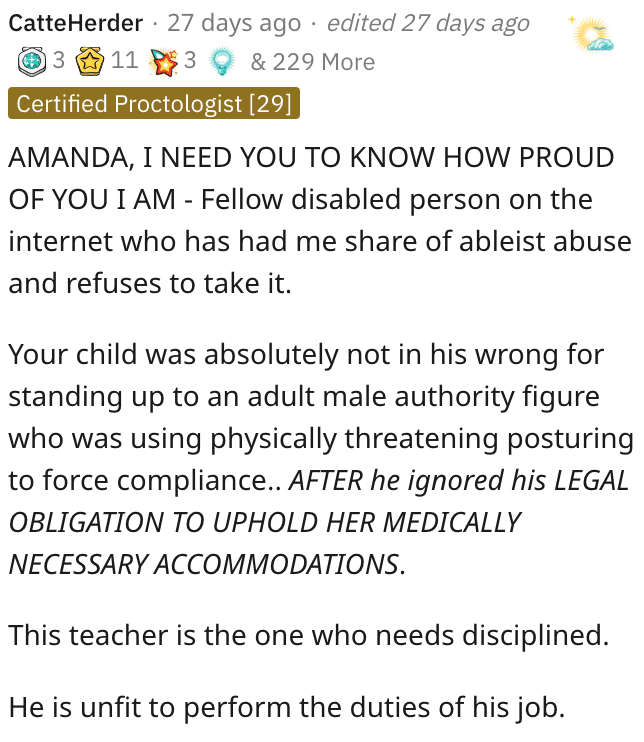 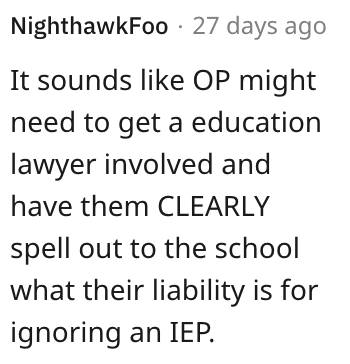 And this individual had some good advice for the parent who wrote the post. 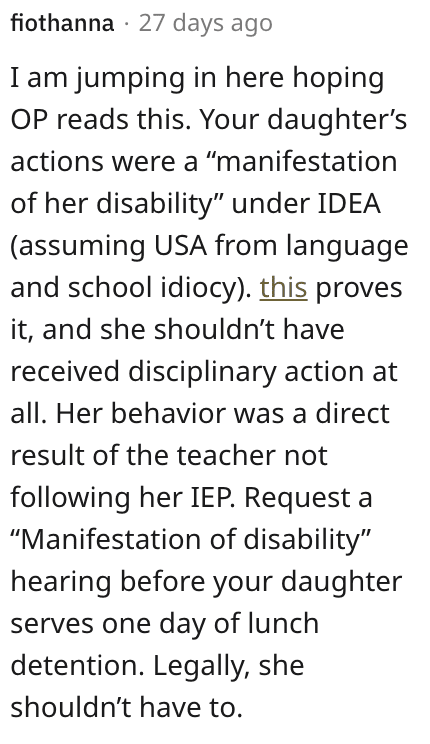